With harvest in full swing, now is the time to think about how you can minimize diseases next growing season. Although this year generally had less disease pressure in corn and soybean, reviewing diseases that have caused you issues in previous years can help you select more disease-resistant corn hybrids and soybean varieties for the upcoming season.

This is an important concept when you consider nearly all of the diseases of corn and soybean in Nebraska are caused by pathogens that overwinter (survive) in fields from year to year. Most of these pathogens survive in infested residue or crop debris from the previous growing season(s).

For example, if susceptible soybean varieties are planted in a field with a history of frogeye leaf spot, or another disease caused by a residue-borne pathogen, you can expect to see disease development when weather conditions are favorable. Planting disease-resistant hybrids and varieties may be a more economical way to manage certain diseases, reduce disease severity and dependence on fungicides, thereby cutting input costs.

Even with selection of a resistant hybrid/variety, a combination of management strategies is still necessary to manage disease. But under low disease pressure, disease-resistant seed could be adequate and may help to reduce the need for fungicide application later to help reduce input costs.

Some production systems are at greater risk for disease, such as those in continuous corn or soybean production or those in minimum or no-tillage regimes where more infested residue (and the pathogen) is maintained on the soil surface. Selecting disease-resistant hybrids and varieties may be more critical in these high disease pressure growing conditions.

Be aware that not all companies evaluate their hybrids for their reaction to diseases, as evaluation of hybrids and varieties can be costly, time consuming, difficult and/or impossible due to the nature of the pathogen(s). Table 1 lists some of the diseases for which companies have provided ratings in their seed catalogs for their corn hybrids or soybean varieties.

When comparing hybrids and varieties across different companies, their rating scales may vary significantly. For instance, 1-9 might mean “high to low” resistance for one company but “low to high” for another. It is important to refer to your company's seed catalog to understand their rating scale to avoid misinterpretation. Contact your local company representative for clarification or if you have questions on their rating scale.

Disease resistant corn hybrids are available for some of our common fungal diseases that are often managed with fungicides, such as gray leaf spot and southern rust, especially in the southeast and south-central counties where southern rust develops almost annually. Disease resistant varieties may not need to be treated with fungicides and can help reduce input costs.

Bacterial diseases, such as Goss’s bacterial wilt and blight and bacterial leaf streak, are still common in Nebraska and best controlled with resistant hybrids since the pathogens can’t be managed with fungicides. Make sure you identify these and other diseases accurately by submitting samples to the UNL Plant and Pest Diagnostic Clinic for diagnosis.

Tar spot (Figure 1) is new to Nebraska but likely to redevelop in coming years, especially in the eastern Nebraska counties. Some corn hybrids may perform better versus tar spot than others and may help to reduce disease severity in future years and dependence on fungicides. 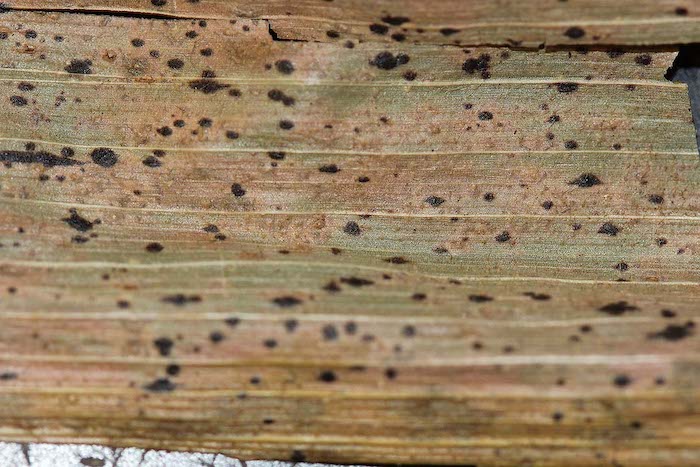 Figure 1. The classic symptom (sign) of tar spot is the presence of black, raised fungal structures on the leaf or husk surface, called ascomata or stromata.

Selecting varieties with resistance to Phytophthora root and stem rot is important in fields with chronic disease issues. Rps genes Rps 1c and Rps 1k have been the most common, but new research results indicate that those genes are not effective against 70% of the Phytophthora in Nebraska and Iowa. Instead, Rps 3a was the most effective in the recent research. For severe disease, be sure to combine resistant Rps genes with a high level of variety tolerance to Phytophthora root and stem rot and an effective seed treatment fungicide that is specific for this disease.

Soybean cyst nematode is still an important pathogen causing losses in Nebraska that you may not be able to see. Be sure to continue to select SCN-resistant varieties and ROTATE them when you plant soybean. Most resistant varieties — greater than 90% — have PI 88788 in their background, but it’s becoming less effective as the nematodes adapt to it. Try switching to rotate with resistant varieties with Peking or PI 89772 resistance, recently available in some Golden Harvest varieties. Adding a seed treatment nematicide may also help in addition to planting resistant varieties and crop rotation. Managing SCN may also help you reduce pressure caused by other diseases, such as sudden death syndrome (SDS) or brown stem rot (BSR).

Sudden death syndrome (Figure 2) leaf disease can be reduced up to 80% with SDS-resistant varieties. Severely affected fields may also benefit from seed treated with one of the fungicides that are effective against the disease, too, such as Ilevo or Saltro. Make sure to confirm that your soybeans were impacted by sudden death syndrome and not another problem, such as brown stem rot or other root disease. 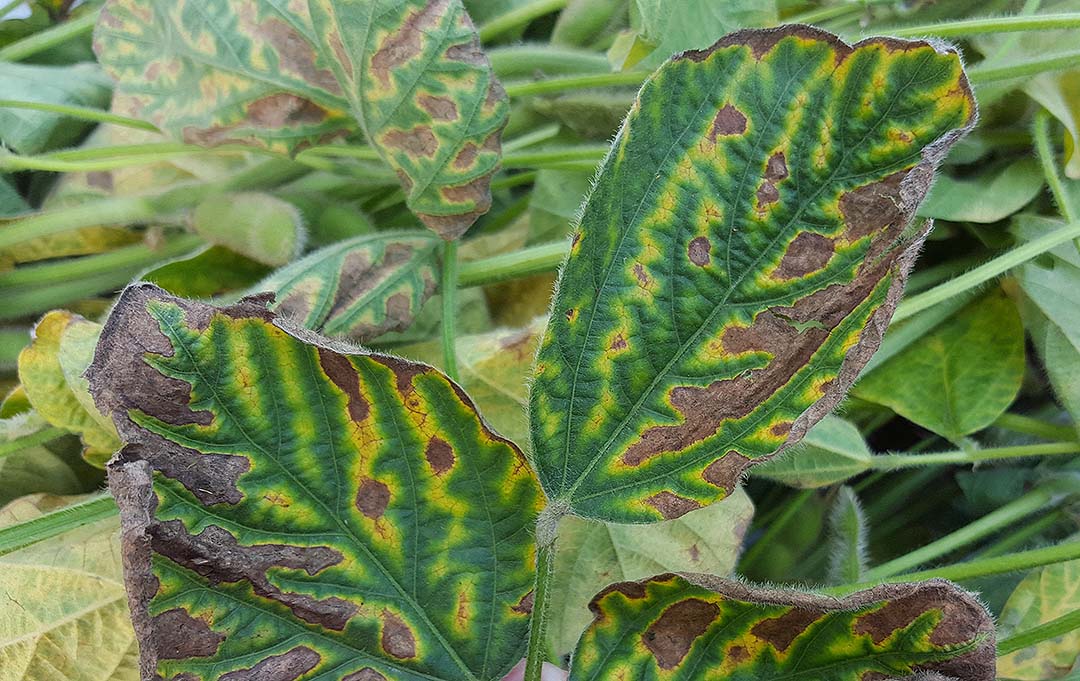 Be sure to scout and submit samples during the growing season to the UNL Plant and Pest Diagnostic Clinic to confirm which diseases are impacting your crops. The correct disease identification can save you a lot of input costs and yield loss.