Ty Fickenscher, owner of Upward Ag Systems in Axtell, Neb., always stresses to his kids the importance of networking.

“Make connections with people because those connections down the road are going to get you where you want to go,” Fickenscher says.

The Nebraskan is living proof. His networking prowess paved the way for an entry into the custom strip-tilling business in 2015.

“One of our customers was looking to switch from liquid strip-till to dry strip-till because it was going to save $17 per acre over 3,000 acres,” Fickenscher says. “I presented to them the idea of buying a machine, we’d rent it back and then do custom work.”

Fickenscher started strip-tilling his own ground in north-central Nebraska in 2021. He believes strip-till offers several advantages over other tillage methods, including warmer and cleaner seedbeds in the spring, a smoother surface for planting, fertilizer incorporation into the root zone, residue retention and erosion reduction. 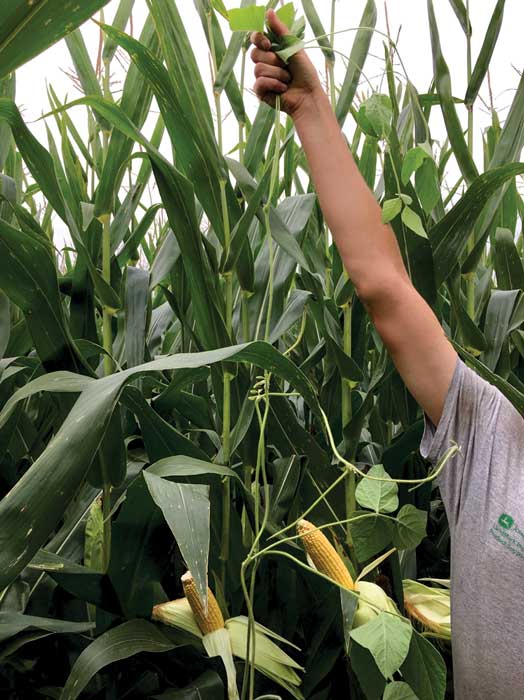 WALKING TALL. Fickenscher’s 6’4” friend holds a soybean plant as high as he can. This is the end result of a corn-soybean companion cropping system, defined as the planting of different crops in proximity to increase productivity.

“We do a lot of fall application,” Fickenscher says. “We try to get as much done as possible before winter. We have mostly silt loam soils where we’re located in Nebraska. If we get dry conditions, like we’ve had the last two falls, we pull up clumps of soil. We have no rocks in our soil. We allow the winter weather to work its magic and break everything down to make it easy to plant into next spring.”

The former Pioneer field agronomist is passionate about helping farmers reap those benefits. He stepped up to the podium at the 2022 National Strip-Tillage Conference to share how companion cropping, intercropping and relay cropping can take an operation to the next level.

One of Fickenscher’s customers challenged him to plant soybeans alongside corn as a companion crop. The main goal was to reduce the amount of applied fungicide, insecticide and herbicide — not getting another cash crop from the soybeans.

“The key is to not overthink intercropping, relay and companion cropping…”

“The first question I always get asked is, ‘How are you going to harvest the soybeans?’ We’re not,” Fickenscher says. “The soybeans are just the companion for the corn. One of the biggest things we’re seeing with companion cropping is a reduced effect of crop disease.”

Companion cropping allows growers to cut back on inputs. Fickenscher can’t put an exact number on the amount of nitrogen (N) delivered by the soybeans, but he noticed that the corn crops next to the soybean companions are in significantly better shape.

While studying agronomy at Colorado State University, one of Fickenscher’s classmates was having issues with stunted corn early in the season.

“He brought in some soil tests that revealed his phosphorous (P) levels were over 100 parts per million and his zinc levels were only 1,” Fickenscher says. “He discovered they were actually getting a zinc deficiency by having too much P.”

This discovery made Fickenscher aware of the importance of micronutrients and why it’s beneficial to apply more than just nitrogen (N), P and potassium (K).

“We’ve been looking at incorporating gypsum in the form of calcium sulfate dihydrate into our program,” Fickenscher says. “With gypsum you get a high amount of calcium and sulfur. One of my college professors, Dr. Dwayne Westfall, would always say gypsum ‘flocculates the soil,’ meaning that it opens up the soil and flushes out some of the salts.

“Here in the Midwest, we’re really focusing on micronutrients. My contention is we can start cutting back on N and P, take those dollars and apply them to other nutrients the crop might need, like manganese, boron and iron.”

Fickenscher was initially overwhelmed about how to adjust the planter for companion cropping, worrying that it was “going to cost half-a-million dollars” to get the planter set up. But the creative juices started flowing when his neighbor offered to sell him a 15-inch, 32-row John Deere 1795 planter.

“We switched the hoses around and put corn in one tank and beans in the other tank,” Fickenscher says. “On the outside rows, we took the bean plates and plugged half of the holes, so when we double back, we’re putting on the full population of soybeans.

“The soybean population is based on the corn population. We had 120-cell soybean plates and 40-cell corn plates. If we put out a 30,000 corn population, we’d put out about 90,000 soybeans. It turned out to be much easier than we expected.”

Fickenscher completed his first intercropping trial in 2022. Intercropping is defined as the cultivation of two or more crops simultaneously on the same field. Like companion cropping, the multiple cropping practice helps control pests and attract beneficial predators, according to Sustainable Agriculture Research and Education (SARE).

For his intercropping trial, Fickenscher set up a 16-row planter to strip-till 2 rows of soybeans and 6 rows of corn, alternated across.

“It’s purely an experiment this year,” he says. “If I was going to really get serious about intercropping, I would go with 6 rows of corn and 5 rows of soybeans on each side. With intercropping, we want to have a higher population on the outside and decrease as we come in.

“I’ve been told you do not sacrifice yield with intercropping. In fact, yields increase if the fertility is done right.”

INTERCROPPING TRIAL. Fickenscher tried intercropping soybeans and corn on his farm for the first time in 2022. He plans on trying relay cropping in 2023.

Fickenscher is also a proponent of relay cropping, which occurs when the life cycle of one crop overlaps another crop. Wheat-soybean, barley-soybean and oats-soybean are three commonly used relay combinations.

“Next year, we’ll be looking at relay cropping on our farm for the first time with barley and soybeans because it fits the rotation and our environment well,” Fickenscher says.

Relay cropping benefits include reduction of nitrate leaching, increased carbon sequestration and increased income for farmers, according to the University of Nebraska Extension.

“When you look at intercropping, relay and companion cropping, the key is to not overthink it,” Fickenscher says. “Reach out and learn from somebody who’s done it before. I thought we were going to have to buy a $500,000 planter, but all we needed to do was buy one off the shelf and move some hoses and discs around.”