Ryan Nell and his father, Ron, are innovators when it comes to the 2,200-acre family farm in Beaver Dam, Wis. However, they don’t adopt new practices without first researching them and conducting their own on-farm trials to optimize methods for their operation.

In 2015, after considerable research, the Nells began transitioning parts of the family farm to strip-till. While the first year didn’t go as planned — Ryan describes it as a “nightmare” — they used it as a learning experience to adjust and adapt FWR Nell Farms into a successful and sustainable strip-till operation.

Now, with the right equipment, berm-building methods and nutrient management, the Nells are seeing higher yields and more consistent results, and have been able to move their average soybean planting date up by 2 weeks. “I think that for someone that moves to strip-till,” says Ryan, “the main thing you’ll notice is consistency of emergence across the whole field.”

Early on in their strip-till journey, the Nells realized that there’s no one-size-fits-all approach for strip-till equipment.

During their first year of strip-tilling, the Nells used a Kuhn Krause 12-row Gladiator with a twin-bin Gen I Montag fertilizer system mounted on top. However, it soon became evident that their tractor was too underpowered for this setup.

To accommodate the strip-till bar, the Nells switched to an 8770 John Deere tractor, with a 300 horsepower engine and 240 drawbar horsepower. He also removed the Gen I Montag and replaced it with a Chandler 10-ton pull-type variable rate fertilizer spreader to simplify operations and more efficiently spread nutrients.

The Nells are in the process of building a second strip-till bar — this one a Dawn Gen 5 Pluribus — which they plan to have ready for strip-tilling in the fall of 2021. With this addition, they hope to be able to cover more than 400 acres a day, with two machines, at 7-9 miles per hour.

For successful strip-tilling, the Nells also employ RTK guidance and individual hydraulic down force on each row of the planter. By using autosteer both in-row and on the headlands, they’re able to minimize areas of compaction, whereas the down-force system allows them to maintain proper planting depth in any scenario.

“With fall strip-till, there can be more variability in terms of how much pressure is needed when we plant into the berms in the spring,” Ryan says, adding that making modifications to ensure his tractor had adequate hydraulics to accommodate the strip-till bar was critical to their success.

Using this equipment setup, the Nells have solved one issue that’s pretty unique to strip-till: managing the corn stalks in between the strips. “We used to run a chopping corn head on everything, but the issue we ran into for a few years with that was the double windrow effect of the chopping corn heads throwing everything to one side,” says Ryan.

“If it was damp, we would plug in that row. For a few years we shut the chopping corn head off and just left them longer, but we still used stalk stompers. But after about 2 years, we started to notice when we would strip-till the soybean stubble in the fall, there was still a lot of corn stalk left. We wanted to somehow manage that a little better.”

In fall 2020, Ryan added the Deere RowMax stalk rolls. “We put them on rows 7 and 8 of our 8-row corn head and I shut the chopping part off on 7 and 8. So I was actually only chopping the stalks on rows 1-6. It looks the same except the residue on 7 and 8 falls straight down rather than in a windrow,” Ryan continues. “If I want to chop, I can turn it back on. It’s a little bit of a Frankenstein setup, but for strip-till you need to build something that works for your system.”

Strip-tilling in the fall allows for a smoother planting process in the spring, according to Ryan.

“We definitely like the fall strips,” he says. “If you can make a good strip in the fall, that’s really worth a lot — that’s almost as important as planting.” Fall strip-tilling might not create a beautiful large dark berm, Ryan explains, but it facilitates moving residue in the spring, which makes planting much easier. Reduced fuel usage and increased efficiency in the spring is another major benefit of strip-tilling in the fall.

With fall strip-till, the Nells have been able to plant soybeans earlier, and in 2018, they started experimenting with mid-March planting. In a 4-acre trial area, they planted soybeans at a variety of depths. By mid-May it was clear, at least 2 inches planting depth was the sweet spot and the early planting had paid off.

“There’s a reason I go deep. I don’t want the beans to emerge too fast,” says Ryan.

Armed with their trial results, the Nells have continued to expand early planting acreage. In 2020, they planted nearly 70 acres of soybeans by early April and with the extra growing time, those soybeans consistently produced the top 10% yields, Ryan says. 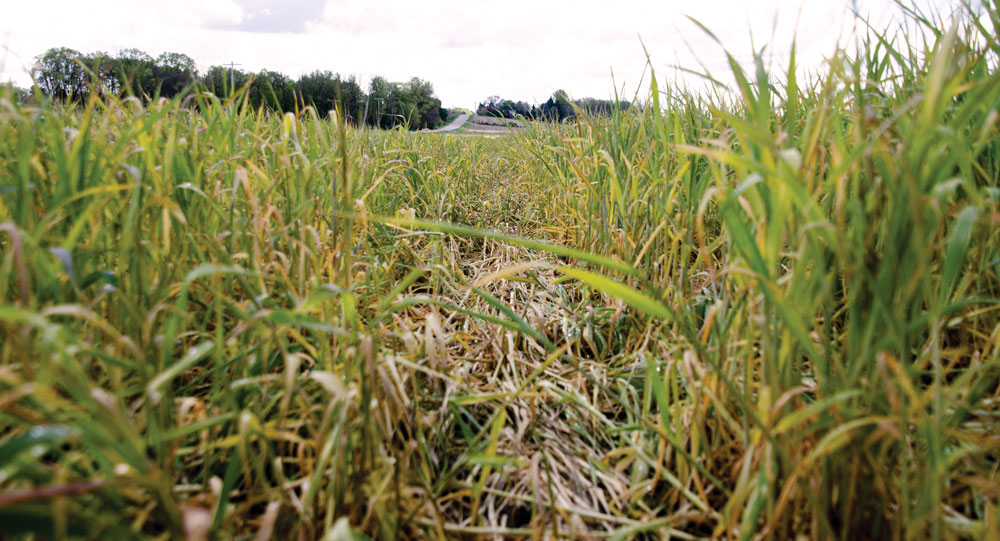 On December 10, 2020, the Nells experimented with extremely early planted soybeans. While the first signs were promising, ultimately the soybeans didn’t survive. “The winter was too warm, we had crusting, there was a lack of moisture, the seed treatment wore off…we tried and thought the beans were going to make it, but they didn’t,” Ryan says.

Developing their weed management program, like some other aspects of their strip-till operation, has been a journey of trial and error. During the first 2 years of their strip-till transition, the Nells did a “weed and feed” application when planting. However, in a strip-till system where there’s no burndown, the lower concentration herbicide wasn’t reaching and killing enough weeds, Ryan explains.

Instead, they developed a two-step method, which involves applying 32% nitrogen (N) with a 120-foot Deere 4930 1,250-gallon sprayer a couple days behind the planter. When applying the 32% they use a streamer-type nozzle in multiple bands, which allows them to accurately apply the N on top of the row with less volatility. About a week later, they then use the same sprayer to apply a mix of herbicides and modes of action.

Because they’ve separated the fertilizer and herbicide applications, they’re able to stretch the application window, allowing the residuals to last longer. “I look at herbicide residuals as a long-term investment,” Ryan says.

While the Nells have in the past seeded wheat after corn silage and before soybeans, in 2017 they began experimenting with a cereal rye cover crop instead of wheat.

To watch a video of Ryan Nell talking about how he manages corn residue on his Beaver Dam, Wis., strip-till operation, visit www.StripTillFarmer.com/media/videos/play/286.

One thing Ryan is hoping the cereal rye will help with is white mold on soybeans. Citing a recent study by the University of Wisconsin, Ryan says research shows that cereal rye can help suppress white mold spores.

“White mold can take 20-40 bushels per acre and because we have areas that are very prone to white mold, we’re always looking for ways to combat it,” Ryan says. To that end, they’re also experimenting with lower populations and different row widths.

For their population studies, the Nells have gone as low as 40,000-60,000. Though such low populations are likely to result in a slightly reduced yield, Ryan says dealing with white mold is worse.

“Sometimes giving up a little yield is worth it to save the majority of the crop from white mold,” he says. “I’d rather forego a few bushels of beans than spend additional money on fungicides to treat mold problems.”

Ryan explains that while the University of Wisconsin typically recommends planting soybeans in 15-inch rows, “when you dig into the data, they don’t see a yield advantage to 15-inch rows until a planting date of May 20th or so.” So the Nells are testing to see if they can get reasonable yields when planting early in wider rows.

“This dove-tails nicely with our white mold trials, as well, and is providing another way to evaluate growing soybeans economically.”

However, in May 2021, some of the Nells’ soybean acres were hit with two late frost events that killed some of their soybeans. “We had to replant twice — 15 acres after a Mother’s Day frost, and 72 acres after a Memorial Day frost.” In both cases, the damaged soybeans were in fields where they had planted green into living cereal rye and then terminated the rye 2 weeks later.

Despite the setback, the Nells will continue their experimental ways, always in search of their strip-till sweet spot.