How to Profit with One Pass Strip-Tilling

A Minnesota strip-tiller has saved money and time while maximizing his soil, but it required a shift in mindset.

Greg Entinger calls himself an accidental conservationist. When he first started strip-tilling, the grower from New Prague, Minn., wasn’t doing so because he was on the soil health bandwagon.

“I was looking at saving money,” he says. “I wanted a one or two-pass system to cut down on time and everything else. I wanted to decrease my equipment size, rather than go bigger. I didn’t want to buy a 500-horsepower tractor.”

Entinger took over the family farm in 2013 after his father passed away and did all conventional farming in 2013 and 2014 on the 1,050 acres split evenly between corn and soybeans.

“I wanted to produce 250-bushels corn,” he says. “I worked with the cooperative to put out enough fertilizer to produce 250 bushels per acre.”

But that goal didn’t pan out. Entinger tried again the following year. After two years of failures, he decided that his soil is incapable of growing 250-bushel corn.

This shift in mindset means letting go of the ego boost that comes with being the grower achieving the highest yield in the county.

“I’d rather be the guy in the county that’s making money rather than being the guy that’s losing money but hitting the top yield,” Entinger says.

Entinger gives the example of a neighbor that yielded 2 more bushels per acre of soybeans than they did, but the Entingers still came out ahead on costs.

“Soybeans were $9 per bushel, so that’s $18 per acre he gained on us,” Entinger says. “But when you add in tillage, we were ahead financially by $65-70 an acre. It’s not always about yield.”

In 2015, Entinger switched to strip-tilling and joined forces with his cousin, Brian Entinger, planting corn and soybeans in spring 2016.

“We were going to seminars and people were talking about strip-tilling,” Entinger says. “I nudged Brian and he agreed that it sounded good.”

However, making the switch to strip-till wasn’t an easy decision for Entinger.

“That first year was a lot of sleepless nights because I was literally betting the farm on it,” he says. “The farm was going to live or die on strip-till.”

He ran a 12-row Environmental Tillage Systems (ETS) Soil Warrior 3100 strip-till rig on 30-inch rows. During the 2016 crop season, the Entinger cousins were surprised at how well strip-tilling worked. Yields did not decrease, and some fields even saw a yield advantage, with one field yielding 30 bushels per acre more than Entinger’s father had ever yielded on that same field. The only difference was strip-tilling.

“Old time farmers that I talked to said it would never work,” he says. “A couple of neighbors said I had the greenest corn in the county. Was that because it was my first year strip-tilling? I don’t know.”

Entinger’s farm qualified as a Minnesota Water-Quality Certified Farm through the Minnesota Department of Agriculture in 2019.

“They made a big deal out of it, because opponents of the program were always saying that only small farmers with 100-200 acres can do it,” he says.

At the event celebrating Entinger’s certification, a Department of Agriculture official took some soil from his property and a neighbor’s field.

The best way to describe his neighbor’s soil was that it was “just a block of ice,” he says. “There were no pores or anything. The water gets onto that surface and just runs off. But in my soil, you could see the aggregates where water could infiltrate through and where there were earthworm holes the size of my pinkie.”

He has seen his soil become looser since implementing strip-till 6 years ago, and soil erosion has improved. Entinger says he waits as long as possible to let fields dry out before harvesting, and the soil structure carries the equipment well.

“In 2019, we had zero issues despite the wet weather,” Entinger says. “One landowner asked me if I’d gotten stuck, because the neighbor across the road had a bunch of tire marks. I told him to look at the field — there may be a track or two, but it’s not very deep.”

The changes to the soil began appearing right away after transitioning to strip-till, Entinger says.

“Our soil is adapting to the change,” he says. “It was hard to believe that soil changes. I grew up on this farm doing all this tillage and never really looked at my soil the way I look at my soil now. I never dreamt of all the benefits of the strip-till and no-till world that I’m in right now.”

In 2021, despite only getting 13-14 inches of rain, corn yields were still amazing, according to Entinger. The area usually gets about 33 inches of rain annually.

“We had a dry spring in 2021, but we planted into moisture with the strip-tilling,” he says. “All of our zones were done the fall before, so we did zero stripping in spring 2021. When we put the seed down 1.5 inches for corn, we were in moisture. The guys that were conventional till were planting into dry dirt. Our corn stubble is keeping the moisture around for soybeans.”

Corn and soybean yields proved to be “unbelievable,” Entinger added. One corn variety yielded 60 bushels per acre more than anticipated.

“I had one corn hybrid that didn’t yield, but then the other ones kicked butt,” he says. “If there hadn’t been a drought, the potential was there to do even better.”

Entinger planted corn hybrids that ranged from 98-106 days and was careful to wait until conditions were right to get out on the planter. He says he knows of a group of farmers who planted corn 2 weeks before him, and their corn came up within 1-2 days of each other.

Another area where Entinger has found massive savings is by cutting down on fertilizer applications. He says that in 2020, he spent $50,000 on fertilizer. In 2021, by using a new 12-row SoilWarrior with a two-hopper system with a John Deere rate controller and pulled by a John Deere 8235R to apply fertilizer, Entinger only applied $34,000 worth of fertilizer.

“I’m still saving. There’s areas out there that I needed zero product because I have too much phosphorus (P) and potassium (K) already,” he says. “I’m using the bank that I have in my fields when input prices are so high.”

Entinger says he watches his neighbors do up to five passes spreading fertilizer and tilling it into the soil. Entinger has trimmed his costs to only $40 per acre for one pass. 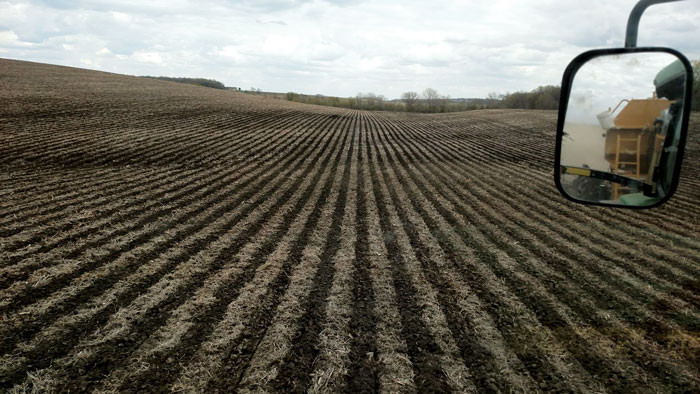 SUCCESS DESPITE DROUGHT. Despite only getting 13-14 inches of rain in 2021, corn yields were 10 bushels per acre above Entinger’s average, while soybean yields increased by 18 bushels per acre.

“I’m only going across my field once. How much time, fuel, repairs and maintenance does it take for five passes to my one pass?” he says. “It’s a crazy huge amount of money. You’re talking about a few hundred dollars for one pass. There’s a cost to everything. Even if you’ve paid for the equipment, there’s still costs involved to run it.”

Saving valuable time is another reason Entinger strip-tills. He and his cousin custom strip-tilled 1,100 acres in 5 days in fall 2021.

The new Soil Warrior has helped Entinger implement variable rate application for both P and K.

“Variable rate allows me to get the product where it needs to be,” he says.

Entinger opted to sidedress his corn twice, which he says was also beneficial to the crop.

“Having food there when the plant is just starting to grow and giving it another shot of food when it gets to the V5 stage — at that stage, the roots are looking for food. It just took off,” he says.

The first year of strip-tilling, Entinger tried using encapsulated urea (ENS), stripping it in with P and K.

“It was a warm, wet winter, and that ENS broke down and leached,” he says. “Then we tried putting down P and K in the fall and making a second pass in the spring to put urea down. Urea is so light and bulky, and it just got to be too much time to make that pass.”

The Entingers transitioned to using 32% UAN, using it as a carrier for their burndown, which is done with the Hagie STS10 self-propelled sprayer they bought in 2019.

“We’re mixing 32% urea with our Roundup and spraying that on our fields, and then we come back and sidedress with 32% when corn is at the V5-V10 stage,” he says. “We’ve been doing this for the last 3 years and it’s been great. It’s so efficient.”

Becoming more efficient was Entinger’s first priority but learning what works best for their operation is an ongoing process.

“Applying the P and K in the fall and urea in the spring worked out great,” he says. “The P, K and ENS was not good. I decided I’m never doing that again.”

Entinger recommends that strip-tillers should also buy a fertilizer tender, crediting the tender to being one of the most critical items his operation has purchased.

“The cooperative couldn’t afford to leave a truck here with fertilizer, so we bought a 10-ton single axle Mack truck,” he says. “I wouldn’t have wanted to drive it fully loaded, but it worked great in the yard. It worked great driving it empty to the field and calling the co-op and telling them it’s parked in this field, go fill it.”

The co-op would have the tender truck filled within 2 hours, allowing Entinger to keep strip-tilling and not miss a beat.

“That’s the toughest thing about strip-tilling,” he says. “You can’t be on the cooperative’s schedule. We may go late into the night. They can have a truck here at 7:00 a.m., fill it back up and we’re cruising again.”

One neighbor farmer who learned Entinger was strip-tilling asked Entinger to rent his land 3 years ago.

“He came to me,” Entinger says. “Another neighbor whose land my dad used to rent asked me to rent their land again. I never thought I would have that land available to me again. They asked me to rent it again because they like what I’m doing. They understand the soil health side of things. Land changes hands so little in this area.”

In 2017, Entinger put together a bid sheet for a 70-acre farm where the landowners were accepting bids for a new renter.

“My bid sheet was 3 pages long,” he says. “I included pictures of what I do with strip-tilling and described it to them. I told them I wouldn’t be the highest yielding or highest paying rent, but I’m going to be the best for their land. I’m not going to starve the land from nutrients and I’m going to do conservation tillage practices on your land. That’s why I want to farm your land. I talked on the phone with them for 1.5 hours, and they came back and asked me to rent their land.”

When Entinger took over that land in 2018, there were 10 washouts. During the wet year of 2019, only one of those washouts came back.

“I fixed that washout again, and haven’t had an issue since,” he says.

Experiment With Strip-Tilling Leads To Strip-Cropping

How One Iowa Farmer Reduced His Fertilizer Usage by 30%