Mike Verdonck has learned that by adding wheat and interseeding to his strip-till system, he can improve his soil while still providing an ideal seedbed for corn.

Mike Verdonck thought that after a decade of no-tilling and strip-tilling, his cropland had good soil structure.

That was until he saw the structure of the soil in his fence rows. Untilled for years and covered all the time, there was a visible difference in structure between the two. Verdonck decided then he wanted to see the fence row soil structure across his entire 2,300-acre farm, located just outside of Montreal, Quebec.

So Verdonck sought a system that would not only improve his soils but help solve other issues he was having, including perennial weed pressure that required a lot of glyphosate to control, as well as soil erosion that occurred from snow melting in the spring.

He realized the best solution for rebuilding his soils was to focus on growing an underground biomass of roots by having living cover crops as much as possible.

Verdonck decided to dive into the soil health movement by developing a 3-year plan that started with growing winter wheat, which would allow him to then broadcast a cover crop mix into the crop at tassel or before.

“The idea of bringing wheat back into my rotation was that window we had for building biomass,” he says, which would allow him to use several cover crop species with different root profiles and build biomass on top of the ground. After wheat harvest, he planned to add legumes, radishes and cereal rye. The legumes and radishes would winter kill while the rye would continue growing the following spring. 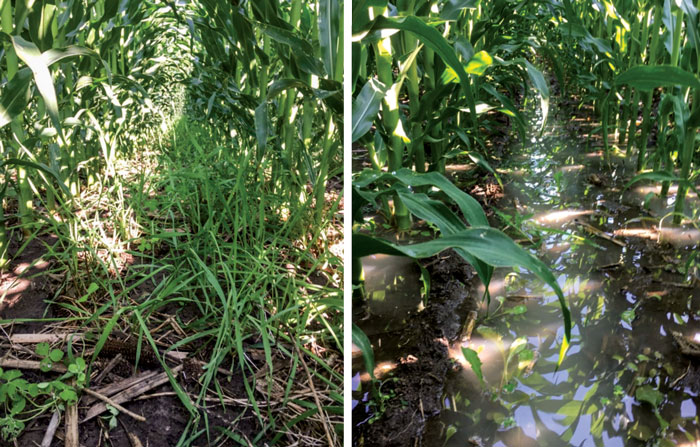 While there’s often concern about allelopathic effects between cereal rye and corn, Verdonck thinks the issues that arise are more likely due to insufficient nitrogen (N) than allelopathy.

To prevent this from happening, Verdonck applies 100 pounds of UAN with 10% ammonium thiosulfate at planting, then sidedresses another 100 pounds when the corn is at the fifth or sixth leaf stage.

The next step then would be to interseed cereal rye into corn in late August, or interseed alfalfa before the corn hit V6.

“I think if you want to plant cereal rye, it’s always better to do it in late summer if you’ve got the proper moisture,” Verdonck says. “That’s one of the best ways to establish your cover crops.”

In the third year, the plan was to let the cereal rye or alfalfa grow to build good biomass and control the weeds, then burn it down before no-tilling soybeans. With alfalfa, he planned to burn it just enough to stall its growth but not kill it, and plant soybeans in 7½-inch rows.

“That puts the alfalfa under the shade and it’ll stay dormant until the fall, then you harvest your soybeans and the alfalfa should take over,” he says, adding that another option would be to broadcast winter wheat into the soybeans just before leaf drop, creating a nice mix of winter wheat and alfalfa for the next year.

After giving his plan a go, Verdonck says that when it works, “it’s just a beauty.” But he admits that reality is often different from what he planned.

He quickly learned the dry years are more challenging than the wet ones, because he’s at risk of the cover crop absorbing too much moisture from the soil.

He also learned that no-till planting corn green into cereal rye is out of the question because his corn needs an ideal planting environment, which is a challenge for his heavy clay soils that are often cold and wet in the spring.

How to Add Cover Crops in the North

For strip-tillers who also have short-growing seasons, Verdonck offers the following tips for adding cover crops into the system:

1. Add a short-season crop, which has been winter wheat for Verdonck.

Although he calls it ”poverty grass,” Verdonck always sees good results in the long term when he puts wheat back into his rotation.

Wheat gives him more options for cover crop diversity as well as a “shoot” year, when he can grow more biomass above ground.

2. Broadcast cover crops into soybeans, although Verdonck says that if you have the window to seed them after soybean harvest, that’s a better route for stronger stand establishment.

“If you don’t have the moisture, you’ll sometimes get bad germination with broadcasting,” he says. “And it’s expensive seed, so if you want the benefits, you need to have proper establishment.”

3. Strip-till into cover crops if you’re going to corn the next year. No-tilling corn green is no longer an option for Verdonck, so instead he seeds cover crops in the fields that will be in corn the next year and strip-tills those fields in both the fall and spring. That way the soil where the corn is planted is still bare, giving the plants that necessary ideal seedbed, while still building soil health.

4. Interseed into corn. Broadcasting cover crops in between the corn rows before V6 is a good way to keep a diversity of roots growing, such as cereal rye, radishes and turnips. But be mindful of your growing zone and moisture.

While Verdonck is still fine-tuning his system to figure out what will build up soils while maintaining profitability, cover crops are here to stay for him.

“Cover crops are something that needs to be integrated into our farm to make our soil more resilient for all those different challenges we face as farmers.”

“Corn is a princess plant,” he says. “It needs to be alone, even germination, perfect seedbed.”

For that reason, he now strip-tills his corn, making strips in both the fall and spring.

He’s also moving away from alfalfa as a cover crop, because of how difficult it can be to stunt it without killing it. And if he doesn’t stunt its growth enough, it’ll continue growing with the soybeans. At that point, there’s nothing he can do because it’s very difficult to kill.

He’s had better success in this system with soybeans, which “can take many hits” compared to corn, but he admits that he sees a yield drag wherever he does plant cover crops, particularly in dry years where it can be up to 60% of a loss. In a normal year it’s much lower, around 0.5%, and in wet years he typically sees a yield advantage.

But Verdonck’s confident that a yield sacrifice is worth it for the sake of improving his soils. And he is seeing positive results. One year he had 2 inches of rainfall within 20 minutes. When he looked at his neighbor’s conventionally-tilled fields he saw flooding in between the corn rows, while his own fields didn’t have any ponding.

And his plants are becoming healthier too. In some small plot experiments he’s done with cover crops, his crops have fewer plant stomatas, but they’re larger, which has resulted in a stronger response to foliar feeding.

Other benefits he’s gained from cover cropping include better control of perennial weeds, such as dandelion and marestail, as well as higher organic matter and nutrient availability.

So far Verdonck has realized that adding cover crops to his strip-till system is a smart combination. He’s continuing to improve his soils while still giving his corn the ideal seedbed it needs.

“Strip-tilling is your insurance against many challenges with cover crops,” he says.

But strip-tillers still need to adopt cover crops mindfully. Verdonck recommends starting small — no more than 10% of your acreage, depending on your risk tolerance. If you want to do more than 10%, make sure you have the equipment to do it right, he says.

He also reminds farmers to adapt cover crops to their farming methods and soil profile. Understanding the context of your farm is one of the six core principles of regenerative agriculture, he says, and he thinks it’s the most important one.

Then as you slowly grow your experience, he says to collect data, evaluate and adjust, and to continue repeating that cycle.

“You’ll get variable results from year to year,” he says. “Even though you’re doing everything perfectly, there’s always something that’s going to challenge you that year coming from different uncontrollables you see in farming.”

Benefits and Pitfalls of Adding Cover Crops in Strip-Till

Refining Residue Management and Cover Crops in a Strip-Till System