Refining Residue Management and Cover Crops in a Strip-Till System

COVER CROPS UP BEFORE HARVEST. The Sass family of Streator, Ill., has quickly found that they’re new Hagie Cover Crop Interseeder system suits their practices the best. In the past, planes hadn’t provided a uniform stand, and the opportunity for drilling the seeds would always come too late in the season.

With the better part of two decades of strip-tilling under their belts, the Sass family in Streator, Ill., could be considered veterans of the practice. On their 2,600-acre farm, many of the methods they employ are tried and true, but they have a flair for innovation and are constantly running tests to build upon their best practices.

Dave Sass and his son Eric strip-till 1,400-1,600 acres of corn, one-third of which is corn-on-corn, and no-till 850-1,000 acres of soybeans. Originally drawn to strip-till by the option of placing nitrogen directly into the strip, the Sasses have enjoyed other benefits like a progressive climb in organic matter content to around 4% in tighter timber soils and increasing fuel savings.

The Sasses purchased a DMI 5300 toolbar 15 years ago and the machine served their purposes well. But as the ratio of their corn-on-corn acres started to rise, they found that the strip-till rig began to struggle with heavy residue.

This was especially critical, as the Sasses prefer to do the majority of their strip building in the fall. In an attempt to overcome the challenge, 2 years ago they purchased an Integra Frame toolbar with 16 Yetter Maverick row units.

“We wanted something that would build better strips in heavy residue corn-on-corn,” says Dave. “The Yetter units have trash whippers and are more aggressive. The unit is heavier and harder to pull with our 8530horsepower John Deere with front wheel assist, but it hasn’t been too much of an issue. We just have to keep it around 5 miles per hour.” 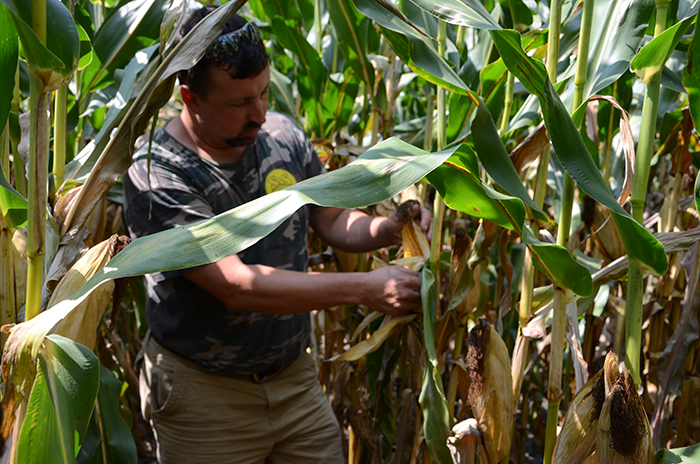 SELECTING SMARTER. To help manage residue, Eric Sass recommends purposefully selecting shorter varieties of corn in some areas so there’s less residue to contend with. The Sasses also select shorter maturity varieties for ground that will be corn-on-corn so the residue has more time to deteriorate after harvest before they come back to build strips.

While the new strip-till rig has helped with residue management, it hasn’t been a cure-all. The Sasses employ a unique mix of strategic practices to improve deterioration rates and minimize residue volume.

With a farm average of 204 bushels-per-acre, their corn-on-corn residue tends to stack up. As many farmers know, newer hybrid varieties can perform well during the growing season, but they take a long time to break down after harvest. But the Sasses use hybrid variations to their advantage.

“In some areas, we try to avoid going with varieties that produce such a tall plant,” says Eric. “If we can have a shorter plant without sacrificing yield, there will be less thick and heavy stalk on the ground to contend with after harvest.”

Maturity rates are another consideration the Sasses make during their variety planning.

“This year, in the fields we knew were going to be corn-on-corn next spring, we planted a shorter season maturity type so we can get them harvested quicker,” says Eric. “This way, the residue will have that much more time to break down before we go back in and build strips.”

Controlling the residue itself is one way to get by, but sometimes planning for the conditions the residue creates works just as well. In the spring, the Sasses rely on timing to help them work with residue rather than against it.

“We’ll plant into soybean stubble first,” says Dave. “We make sure that we’re planting into corn-on-corn last because that’ll give it more time to break down further, but also it gives the ground more time to warm up in those spots.”

This year, they experimented with vertical tilling in the spring with a Turbo Tiller on 20 acres of corn-on-corn and subsequently built strips to help further churn and break up residue. They hadn’t spotted any visual differences in the corn, but will know for sure after harvest whether there will be a big enough yield boost to justify the expense of the extra pass. 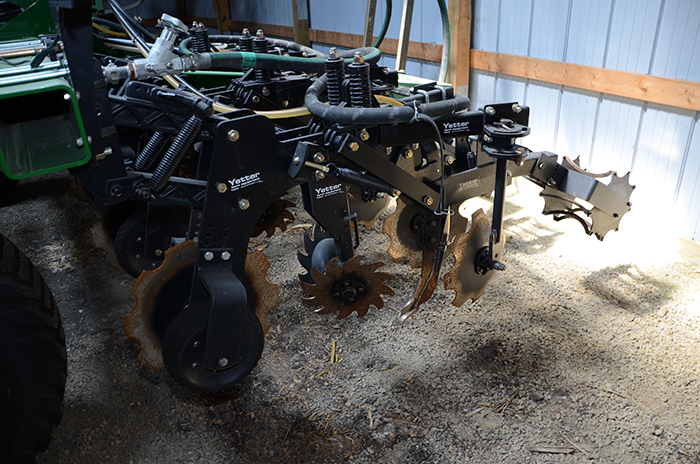 REGULATION READY. Although the Sasses still apply the majority of their nitrogen in the fall in the form of anhydrous ammonia, they suspect that regulations may soon push them toward spring application. To head this off, they were sure to have their new Yetter Maverick row units outfitted with the capability to band 28% nitrogen, so they can avoid spring seed burn.

Over the past several years the Sasses have been pleased with the success they’ve had with cover crops. Being among the first in the state of Illinois to get their hands on a Hagie Cover Crop Interseeder system, they’ve seen noticeable improvements over other application methods.

“It’s a nice setup because it has drops on it that kick the seed out at ear height or a bit lower so you’re getting the seeds right to the ground in the middle of the row,” says Dave. “A plane gets a lot of seed on or in the corn plant. Drilling has worked the best for us, but you have to wait till after harvest which would be pretty late for our area.”

Eric feels that consistency is really where their current system shines.

“Planes are always iffy on the ends where the pilot has to turn the seeding on and off,” says Eric. “Helicopters do a little bit better because they’re more accurate and have the added down force from the propellers, but with the interseeder system, we’re getting a more uniform stand across the whole field.”

But the Sasses acknowledge they are still fine-tuning their cover crop methods.  They recently changed the paddles on the interseeder system that turn to feed the seed — getting more aggressive ones for consistency, and also added some scales so they can be more accurate with calibration.”

Strip-tilling alone has helped build organic matter in their tight timber soils, but the Sasses are hoping that their current cover crop mix of cereal rye and tillage radishes will take that even further.

“The tillage radishes get really big and help open the soil up, it’s helped with better drainage and mellower soil as well,” says Eric. “The first year we could really see the holes left by the tillage radishes in the spring and they help reduce compaction.”

Staying One Step Ahead

Getting a newer strip-till rig that handles residue better and implementing cover crops were measures the Sasses took to keep in step with emerging practices, but they’re always anticipating the next step. For instance, although the Sasses have yet to come up against serious herbicide resistant weed pressure, they know that it’s something they need to think about soon. They’re looking to cover crops to help them solve that issue.

“There was a demonstration that we saw in which a farmer had seeded cereal rye in the fall and planted right into it in the spring, then they waited for their soybeans to come up before coming back with Roundup to kill the cover crop,” says Eric. “They’d been having problems with water hemp, but when the cover crop dies, it leaves behind a mat that smothers everything else, other than the soybeans.

“Controlling resistant weeds naturally is going to become really important soon, and we’ll be running some of our own tests in the next year or two in some of our water hemp prone areas to see it firsthand.”

Another future consideration the Sasses are trying to head off is the anticipated curbing of fall applied nitrogen (N). Their current program is centered around 200 pounds (225 pounds for corn-on-corn) of anyhydrous ammonia, banded 8 inches deep in the strips during the fall. The Sasses envision a future in which they’ll have to apply the majority of that N in the spring instead.

Not wanting to have to worry about seed burn, they made sure to outfit their new strip-till bar with the capability of applying 28% N in the strips.

“Occasionally we run out of time in the fall and have to build strips in the spring,” says Dave. “So far, we’ve been lucky when we do the spring strips with anhydrous because we’ve gotten in early enough to avoid any seedling burn. With the new bar we can apply 28%, but we’re trying to use both right now to get used to it. When the EPA rules on N application restrictions, we’ll be ready for them.”