Calibrating a boom sprayer is not as difficult as it sounds. Although there are many methods to use, the method described here is simple and requires few calculations. It's based on spraying 1/128 of an acre per nozzle and collecting the spray that would be released during the time it takes to spray the area. Because there are 128 ounces of liquid in 1 gallon, this convenient relationship results in ounces of liquid caught from one nozzle being directly equal to the application rate in gallons per acre, or GPA.

For example: If you catch an average of 15 ounces from a set of nozzles, the actual application rate of the sprayer is equal to 15 GPA. With this method, make sure that the time used to catch output from nozzles is the same as the time it takes to cover 1/128 acre. Table 1 shows the distance you must travel to cover 1/128 acre for different nozzle spacings and row spacings. For broadcast applications, use the nozzle spacing to determine the calibration distance. For band or directed applications, use the row spacing.


To calibrate your sprayer, you need a measuring tape, a watch capable of indicating seconds, and a measuring jar graduated in ounces. A pocket calculator also will be handy. 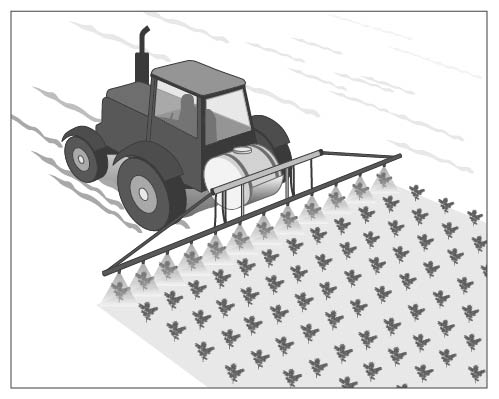 Follow these steps when calibrating boom sprayers for broadcast applications:

Pesticides sometimes are applied in bands centered on the crop row (Figure 2). The application rate on the treated band must be the same as the broadcast rate for band application to be effective. But the total amount of pesticide used on a field is less, because only a portion of it is treated with chemicals.

Calibrating a sprayer for banding applications is similar to the procedure outlined for broadcast sprayers. The only difference is to choose the travel distance from Table 1 based on row spacing, not nozzle spacing. Drive the distance shown in the table at your spraying speed and catch the output from each nozzle for the length of time it takes to travel the indicated distance.

Herbicide recommendations are usually given on a broadcast basis. Therefore, convert the recommended broadcast rate to the band rate before comparing it with the measured rate to determine the application error. To convert a broadcast application rate to a band rate, use this formula:

Then, compare this converted band rate to the measured rate. Make some adjustments and recalibrate the sprayer if the difference between the two rates is greater than ±5 percent of the recommended rate.

Calibrating a row crop sprayer with two or three nozzles per row (Figure 3) is similar to calibrating a band sprayer. With broadcast or band applications, GPA is equal to the output from one nozzle. When more than one nozzle is used per row, the combined amount collected from all nozzles directed at one row is equal to the GPA. Again, this application rate is not the same as the broadcast rate. You must convert the recommended broadcast rate to the band rate before comparing it with the actual rate you obtained with calibration. 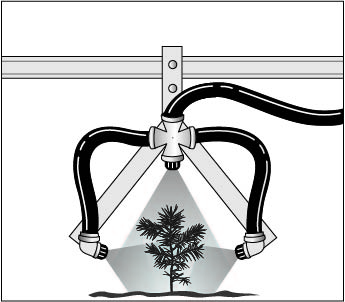 You want to spray a 30-inch row using three nozzles per row. The steps:


Adding the Chemical to the Tank

You can spend hours in the field to achieve the accuracy desired from your sprayer through proper calibration, but it won't do any good if you don't know how much chemical to put in the tank. A survey conducted by agricultural engineers at the University of Nebraska revealed that of the applicators surveyed, 38 percent failed to add the correct amount of chemical to the tank.

The amount of chemical needed per tankful depends on the recommended rate and the number of acres you can treat per tank of spray.

To find the acres treated per tank, divide the tank capacity by the GPA application rate.

To find the amount of pesticide needed per tank, multiply the number of acres treated by the amount of actual chemical to be applied per acre.

A sprayer has a 300 gallon tank, and it has been calibrated to apply 15 gallons per acre. The pesticide label recommends 2 pints of commercial product per acre for broadcast application. Determine the quantity of pesticide to add to the tank:

First, find the acres each tank will spray:

Next, calculate the number of pints to be added to the tank:

The final mix consists of 40 pints (5 gallons) of pesticide formulation and 295 gallons of water per 300 gallons of tankful.

NOTE: If the tank is not completely empty when refilling, use the amount of water required to refill the tank, not the capacity of the tank itself when determining acres treated per tank. For example: If you have a 300 gallon tank but you have 75 gallons of spray left in it when you refill, you will use 225 gallons in your calculations instead of the total tank capacity.

You must add 30 pints of chemical to the tank.

Sometimes, chemical manufacturers give recommended rates in terms of active ingredient (A.I.) to be used per acre rather than the amount of total product per acre. In these cases, calculate the amount of material to be applied as shown in examples 2 and 3 for dry chemicals and liquid chemicals, respectively.

The application rate of the chemical is 2 pounds A.I. applied per acre. The material to be used is a wettable powder containing 50 percent A.I. Determine the quantity of chemical to add to the tank:

The chemical you are using is liquid. The recommendation calls for 1 pound A.I. per acre. You have purchased a formulation that contains 4 pounds A.I. per gallon. Determine the amount of product needed per acre.

Next, calculate the amount of chemical to add to each tankful:

You want to apply a herbicide on a 12-inch band on rows spaced 36 inches apart. The herbicide label recommends 3 pounds of material per acre on a broadcast basis. The sprayer has a 300 gallon tank, and the application rate measured with the calibration method explained previously for band application is 5 GPA. Determine the amount of chemical needed per tank:

First, determine how much chemical will be used when applied on 12-inch bands.

The rest of the procedure to determine the chemical required per tank is the same as explained earlier for broadcast applications.

Thus, you will need to add 60 pounds of chemical product to the 300 gallon tank.

Mixing the pesticide thoroughly and carefully is an important step in good sprayer operation. Incomplete mixing results in varied application rates - too heavy at times, too low otherwise. Some chemicals, when mixed improperly with others, form a thick, mayonnaise-like mixture that will not spray properly and is difficult to clean out of the sprayer. Always read the label for proper mixing sequence and test the compatibility of chemicals in a small container before mixing.

Generally, when preparing the spray mixture, fill the tank more than half full of water and pour in the correct amount of chemical while the pump is running. Then, finish filling the tank. When using wettable powders, make a slurry in a separate container and then add the slurry to the tank to ensure good mixing.

Here are some other considerations for calibrating your sprayer:

To determine the actual travel speed in the field:

To determine the appropriate travel speed (MPH) for a desired application rate (GPA):

To determine the appropriate pressure (PSI) for a desired application rate (GPA):

Calibrate Your Sprayer To Save Pesticides, Money

Down Force and How it Impacts the Structure of Your Furrow

9 Easy Steps to Calibrate Your Sprayer