With the wet weather we have experienced this spring, stressed crops and herbicide injury are always a possibility, particularly in corn from PRE applications.

The primary ALS inhibitor corn herbicides used PRE in Penn State's region include products that contain flumetsulam (Hornet and Surestart II), thiencarbazone (Corvus) and rimsulfuron (Basis Blend and Resolve products). The potential for ALS injury increases with rapid uptake of the herbicides during warm wet weather conditions. Also, due to the rainy and cloudy weather, the crops have been struggling to grow and likely will be more sensitive to postemergence applications. Certain formulations such as EC (emulsifiable concentrate) formulations as compared to encapsulated formulations (CS and ME) can cause more injury. For example, Degree Xtra and Prowl H2O are generally safer on emerged corn as compared to their counterparts Harness Xtra and Prowl 3.3EC, respectively.

There is also an increased crop injury potential when combining residual herbicides with loaded glyphosate products or adding additional adjuvants to the spray mix. Regarding application timing after environmental stress, the general rule of thumb is to allow a few sunny days to pass after coming out of a rainy, cool period before applying herbicides, but we may not have that luxury this season. Since the plants are stressed, this allows them time to build up a thicker leaf surface and to get their metabolic processes functioning at a faster pace to detoxify the herbicide. Also, with all the moisture, warmer temperatures and eventual sunlight the plants will be growing very quickly and are succulent, so consider using nonionic surfactant (NIS) instead of crop oil concentrate (COC) or methylated seed oil (MSO) as the spray additive.

As always, it is rarely the herbicide alone that produces crop injury. Consider the weather (temperature and moisture), planting technique and success, herbicide rates, combinations, and timing relative to the crop and other environmental, soil and management factors that may contribute to the problem. Thoroughly consider the possible reasons for the symptoms before you draw conclusions. Here is a summary of the potential for herbicide injury and the associated symptoms. 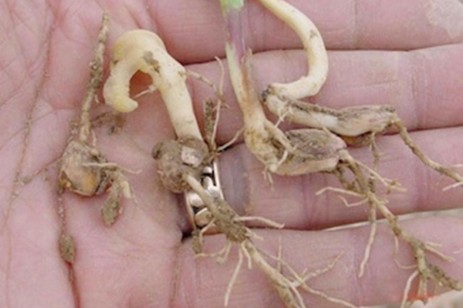 This group of herbicides include Dual II Magnum, Harness/Surpass/Keystone, Outlook, Zidua and their associated atrazine and other premixes, as well as many generic products. These herbicides are classified as shoot inhibitors and injury typically is seen as leafing out underground or tightly wrapped leaves that fail or have difficulty unfurling. Emerged plants may appear buggy whipped. The acetamides do not generally impact the root system. (Image 1) The injury potential for the acetamide herbicides to corn is generally not great; we rate them as "good crop tolerance" in the Agronomy Guide. As with most soil-applied herbicides, the injury potential increases on lighter, lower organic matter soils under cool wet conditions with shallow planted corn. The injury potential can also increase depending on tank-mix partner with herbicides, such as 2,4-D, dicamba and pendimethalin (Prowl), sometimes increasing the severity of injury.

Dicamba is the active ingredient in Clarity, Engenia, Xtendimax and a component of Status and Yukon, as well as many generic products. Dicamba is classified as a growth regulator herbicide. The potential for injury with soil applications of dicamba increases with lighter, low organic matter soils, cool wet weather, shallow planted corn and seed that is not adequately covered during the planting and spray operation. Corn should be planted a minimum of 1.5 inches deep if dicamba is applied preemergence. Dicamba injury from soil applications may range from stunting to pruned and thickened roots, twisting, swelling and onion leafing of shoots. (Image 2) The injury potential from foliar applications of dicamba generally increases with warmer temperatures and increasing corn maturity. Foliar applications of dicamba should be applied by V3/V4 to reduce the risk of crop injury. Crop and methylated seed oils as well as rates above 0.25 lb ai/acre (½ pint Clarity) can increase the injury potential with foliar applications.

Pendimethalin is the active ingredient in Prowl and several generic brands. Pendimethalin is classified as a root inhibitor herbicide. Pendimethalin should be applied to corn after planting and to corn planted at least 1.5 inches deep. Pendimethalin injury potential increases with cool wet weather, shallow planted corn, light, lower organic matter soils and with corn seed that is not adequately covered by soil (open slits). The Agronomy Guide rates pendimethalin as "good crop tolerance" as long as proper management practices are used. The symptoms of pendimethalin injury include pruned roots, swollen root tips and stunted plants or seedlings. Emerged plants may appear purple due to the secondary effects of phosphorus deficiency as a result of inhibited root growth. (Image 3) Soil crusting can enhance injury. Acetamide herbicides are frequently used in combination with pendimethalin and may contribute to the observed injury symptoms. 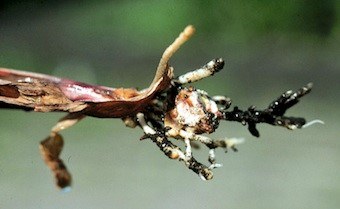 The primary ALS inhibitor corn herbicides used PRE in our region include products that contain thiencarbazone (Corvus), rimsulfuron (Basis Blend and Resolve products) and flumetsulam (Surestart II and Hornet), as well as a few generic products. As with the several other soil-applied herbicides already mentioned, the potential for Group 2 injury increases with cool wet weather, shallow planted corn (plant at least 1.5 inches deep) and with lighter, lower organic matter soils. The injury often appeared worse where soil property/conditions also exist, such as on clay knobs, areas planted when wet producing compaction and cloddiness. The Agronomy Guide denotes ALS injury potential to corn as "fair." ALS herbicides can cause stunting of both corn root and shoot growth. The roots can be “bottle brushed” but are more often simply reduced in lateral growth and development. The roots may also appear slightly thickened and swollen. The shoots may appear stunted and purple to yellow with interveinal chlorosis. (Image 4)

The potential for ALS injury increases with rapid uptake of the herbicides during warm wet weather conditions. Much of this injury appeared as stunted somewhat chlorotic corn and with our injury ratings ranging from 10 to 25%. This type of injury is frequently seen with abundant rainfalls during May followed by the hot weather of early June which stimulates herbicide uptake above the tolerance level for corn. (Image 5) If good growing conditions occur during the weeks following injury, the corn usually recovers with little or no impact on grain yields. 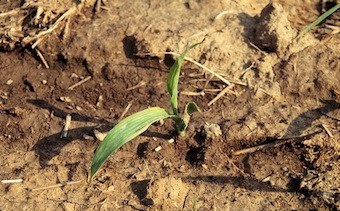 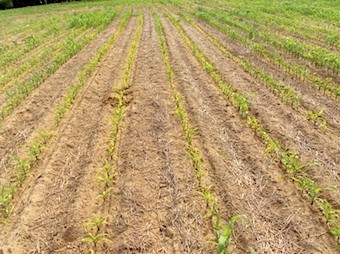 Balance Flexx and Corvus (isoxaflutole) and mesotrione (Callisto and a component of Acuron, Lumax, Lexar and others) are pigment inhibitor herbicides preventing the development of chlorophyll in susceptible species turning plants white. (Image 6) Soil applications of Balance/Corvus hold many of the same restrictions and concerns as pendimethalin and ALS herbicides ("fair-good" rating). Cool wet weather, shallow planted corn, open seed furrows, lower organic matter, lighter textured soils and higher use rates increase the injury possibility. The potential for mesotrione injury from soil applications is usually less than isoxaflutole ("good" rating). Mesotrione applied post can occasionally injure corn and like many foliar applications, warm humid weather generally increases the potential for injury. With mesotrione, corn generally quickly recovers from any post-applied yellowing or bleaching-type symptoms. Mesotrione has a greater risk of injury to corn with certain OP and carbamate insecticides as well as in applications that include methylated seed oils. 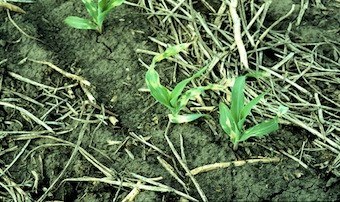 Depending upon the product used, the potential for injury from soybean herbicides is greatly increased in certain situations. Products such as metribuzin, Valor, Authority, Prowl and a few others can cause severe injury if the herbicide comes into contact with the germinating seed (e.g., open seed furrows) or are used in coarse soils with low organic matter. Good articles about soybean injury from herbicides have been written by my colleagues at other universities. Please refer to these for images and a discussion about them:

Recently, there have been questions about herbicide injury if seed furrows are not completely closed. In some cases, most of the field has open seed furrows and the residual herbicide program has not yet been applied. This is a situation which requires some thought to best determine the next steps and there are no easy answers in this case. Applying a program containing some the above herbicides could cause crop injury since the herbicide has direct access to the seed, but at the same time, poor weed control could result if these products are not used, especially if the field has marestail or Palmer amaranth populations. Assuming the field is planted to Xtend or Enlist E3 soybeans, an early post herbicide application that includes glyphosate, dicamba or 2,4-D choline (depending upon the platform), plus a residual herbicide such as Prefix, Zidua, Warrant or other, can provide control of many weeds. In LibertyLink, E3 or LLGT27 varieties, Liberty (or other glufosinate product) plus residuals can be used to help control problem weeds such as marestail or Palmer and other species if a residual herbicide was not applied before planting. But nonetheless, creative herbicide programs will need to be considered to combat weeds yet protect the crop.

How to Identify Injury Symptoms From Freeze Damage to Wheat