By early June 2022, more than 60% of soybeans had been planted, and less than half of all soybeans had emerged in Kansas, according to the USDA Kansas Crop Progress and Report Condition 2022. Not only do producers still have more than one-third of the soybean acreage to be planted, but some of the planted acres will need to be replanted after an initial assessment based on potential issues caused by the recent hail and flooding conditions in some areas of the state.

Kansas farmers have been planting soybeans slightly earlier in recent years — at the rate of about one-third day earlier every year (Figure 2). Statewide, in the past 5 growing seasons (2017-21), the “50% planting date” mark was achieved between the end of May (for the most recent decade) and the first of June (in the 1980’s). The earliest date achieving half of the beans planted was May 12 in 2014, while the largest delay was June 28 in 1982.

Following the latest USDA Crop Progress and Condition report (June 6, 2022), soybean planting is progress is equal to the 2017-2021 average. 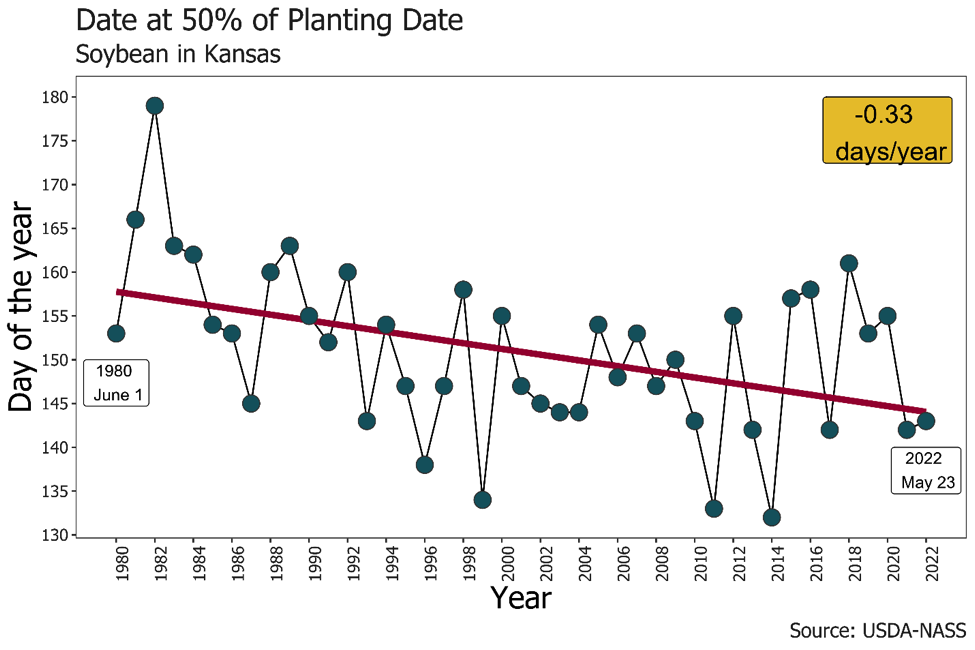 Trend in the date at which 50% of planting progress was achieved for soybean from 1980 to 2022 in Kansas (the last four decades of soybean progress in Kansas). Source: USDA-NASS.

Where soybean planting has been delayed (or in double-crop soybean systems), producers should consider a few key management practices. Planting soybeans in the right soil conditions is essential for establishing an adequate soybean canopy and improving chances to increased yield potential.

By planting in early June, soybeans are expected to bloom and fill seed from mid-August to-mid-September, when nights are cooler, and the worst of heat and drought stress is usually over.

From mid-April to mid-July, maximum soybean yield in Kansas is reduced by 0.3 bu/a per day of delay past mid-April, from yield levels about 80-90 bu/a to ~50 bu/a (Figure 3). On the other hand, the yield variability-range is expected to narrow down as planting date is delayed, which may result in an improved yield “stability” for late-planted soybeans (although achieving a lower maximum yield). More information related to this topic available at https://eupdate.agronomy.ksu.edu/article_new/soybean-planting-date-and-maturity-group-selection-490 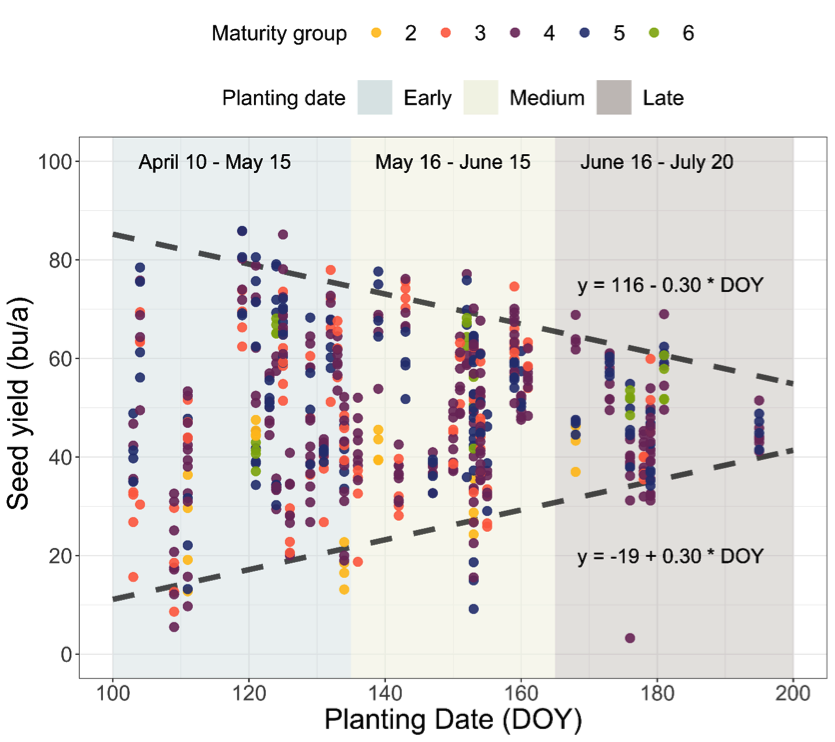 Soybean seed yields as a function of planting date from Early (mid-April to mid-May) to Medium (mid-May to mid-June) to Late (mid-June to mid-July) for a diverse set of maturity groups (from Maturity Group 2 to 6).

Soybean emergence could be delayed or compromised where there has been an excessive amount of rainfall in recent weeks. Replanting soybeans should be reserved only for exceptional cases where the stand counts and the uniformity look seriously affected. Otherwise the cost of replanting is unlikely to pay off. Initial assessments should be done by the cotyledon stage (VC) and a week or so after the initial damage to assess the overall condition of plants and potential issues related to lack of uniformity, which could be a problem when stands are severely reduced.

For more on this topic, check this our eUpdate article on “adjusting seeding rates for soybeans.”

Information on late-planted soybeans across multiple row spacing suggests that narrow rows (e.g. 7” or 15” vs. 30”) can hasten canopy closure, increasing season-long light interception, weed suppression, and potentially improving biomass and final yield. The likelihood of a positive yield response to narrow rows increases as the yield environment lowers (Figure 5), for example with delayed planting. For more details on this topic, check our eUpdate article on “soybean row spacing”.

Finally, proper identification of soybean growth stages can make a difference in yield.

3 Considerations to Set Up Soybeans for Success