Eric Hawbaker didn’t grow up on a farm, but a decade of working in the fertilizer industry as an agronomist, service tech and precision ag salesman left him concerned about the losses he saw occurring as a result of broadcasting nutrients.

As he explored options to improve nutrient use efficiency, he learned that subsurface banding of dry fertilizer made economic and environmental sense. He partnered with a friend to share in the cost of a strip-till rig and launched a custom strip-till operation 12 years ago.

“I dove in with both feet right from the beginning,” Hawbaker says. “The agreement was that I’d run, manage and maintain the strip-till rig, and my partner would cover half the expenses.”

His partner has since retired and transferred his share of the business to his nephew. Hawbaker’s commitment to the practice remains unchanged.

“We’re committed to strip-till because it’s been a good system for us,” Hawbaker says. “Our emergence is better with strip-till than it would be with conventional tillage. Plus, fertilizer placement below the seed in the strip has eliminated the need for starter fertilizer on the planter.”

Cashing in on Strip-Till

Growing up, Hawbaker frequented his grandparents’ farm, developing a passion for agriculture that wasn’t completely fulfilled until 2005.

“When I was working as an agronomist, I found an opportunity to start farming with a former customer who was retiring because of health issues,” he says. “I initially started with 600 acres, and my operation is up to about 2,500 acres now.”

The Riceville, Iowa, strip-tiller faced two major hurdles early on. One, he didn’t have enough money to invest in multiple pieces of equipment, and two, his geographical location wasn’t ideal for conventional tillage. Strip-till provided a solution to both challenges.

“We have soils that are either very rocky, heavy or loamy,” Hawbaker says. “We are located in the coldest and wettest part of the state. To get the soils to warm up in the spring we needed to do some kind of tillage. Strip-till was a way for us to hit a happy medium where we’re getting the benefits of some tillage, but still not creating erosion issues.”

To help financially jump start his operation, Hawbaker enrolled in a 3-year strip-till/no-till initiative with the Environmental Quality Incentives Program (EQIP). He also takes advantage of funding through the Conservation Stewardship Program (CSP).

“We don’t have the long-term history of no-till that they do in other parts of the country, so the National Resources Conservation Service (NRCS) loves when people get into strip-till here,” he says.

Hawbaker likes to complete most of his strip-building in the fall for corn-on-soybean stubble. He recalls running the strip-till machine and the combine in the same field at the same time in 2020.

“I believe it was Nov. 5 when we finished strip-tilling that year, the earliest we’ve ever finished,” he says.

Hawbaker’s decision to shift to shorter season soybeans for the first time made it possible to accelerate the strip-building schedule. 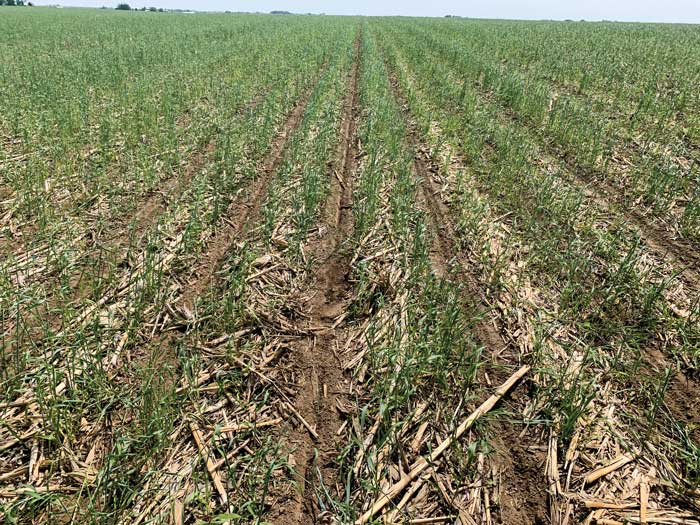 EXTENDED COVERAGE. Hawbaker has been using cover crops for almost a decade to control erosion, reduce compaction and suppress weeds. He recalls neighbors looking at him “sideways” when they saw 2-inch-tall corn growing through 12 inches of dead cereal rye.

“We found out the shorter season beans yielded just as well as the fuller season beans, so we gave them a try. It really sped things up in the fall. Corn harvest moved up 7-10 days, and we were able to start strip-tilling earlier than normal.”

Fall strip-tilling creates more “uniform soil and water conditions so the corn never has a hard time getting out of the ground,” Hawbaker says. It also eliminates the soil crusting issues that once plagued his area.

When spring rolls around, Hawbaker turns his attention to building strips for the continuous corn acres that usually make up about one-third of his fields.

“We try to build most of our strips for corn-on-corn in the spring, so the stalks have more time to degrade,” he says. “A lot of it has to do with the proximity to the dryer. We keep the corn-on-corn as close as we can to the dryer site, so we don’t have to do as much hauling.”

“I’ve been so pleased with the Gladiator that I’ve never felt the need to look around for something different,” Hawbaker says.

He also recently invested in AutoTrac Implement Guidance, to prevent his machine from sliding off track on hills and to improve pass-to-pass spacing.

Hawbaker’s nitrogen (N) application strategy focuses on reducing the margin for error. His program can be summed up as follows: three ways, three times to ensure corn is never N deficient.

“We aren’t dependent on weather or timing with each application,” he says. “If there’s a delay with one, we just pick up the slack with the next one. We apply N with the strip-till machine in the form of dry DAP or MAP plus urea ammonium nitrate (UAN) depending on the scenario. We then come back with UAN 32% before emergence, followed later by a sidedress application after emergence. In one way, shape or form, our corn is going to get the N it needs.

“We typically run a shank about 6 inches deep, so fertilizer placement is between 5-6 inches deep. The Gladiator can go deeper, but we’ve never found the need to.”

He shoots for corn yields between 200-205 bushels and soybean yields in the mid 50s.

All in on Cover Crops

Hawbaker is a strong proponent of cover crops, especially after witnessing their ability to suppress weeds, control erosion and reduce compaction. He predicts a bright future for the increasingly popular conservation practice.

“I think cover crops are going to be a big part of things going forward,” he says. “My sister-in-law is a research scientist for the forestry department in Colorado. She asked me, ‘How do we solve all these carbon sequestration and N runoff problems?’ And I replied, ‘I can answer that question with two words – cover crops.’ Put them on every acre, and it will solve 90% of those problems.”

Hawbaker started integrating covers into his operation a decade ago. He flies on cereal rye (55-60 pounds per acre) around the first week of September, with the goal being to get a good stand established through winter.

“The cereal rye really took off this past year,” he says. “We had an early spring, and I was planting corn into rye that was 12 inches tall. We terminate with Roundup right after planting. A lot of our neighbors looked at us sideways when they saw 2-inch-tall corn growing through 12-inches of dead cereal rye.”

He’s also experimented with clover, radishes, rape, annual ryegrass and turnips. Most of those species don’t germinate until the spring, which has, “never been detrimental to a crop but has made for some really ugly bean fields,” Hawbaker says.

As part of his enrollment with CSP, he performs Haney soil tests, which have confirmed a direct correlation between increased cover crop usage and improved soil health.

While cover crops and strip-till are picking up steam in his neck of the woods, the cost of entry is slowing a lot of people down, Hawbaker says. He’s surprised more people don’t take advantage of the available funding from CSP and EQIP to get started.

“The funding is what helped me get involved with strip-till,” he says. “A lot of people balk at the cost per acre of strip-till, but I think it’s personally the cheapest route I can find. There is a lot of money out there to provide for getting into it and to help cover the costs.”