How One Iowa Farmer Reduced His Fertilizer Usage by 30%

Fredericks, who farms just 15 miles south of the Minnesota state line in a very cold climate, points out that what worked for him might not be the best for every single farmer.

Wayne Fredericks, a corn and soybean farmer from Osage, Iowa, has been no-tilling soybeans since 1991 and strip-tilling corn since 2001. But ever since he tried using cover crops in 2012, he has been able to reduce his use of fertilizer by 30%. Fredericks first introduced cover crops at the suggestion of the Iowa Soybean Association’s On-Farm Network. He initially tried replicated strip trials to answer some of the questions that he and many other farmers had at that time, such as how to plant cover crops, how to terminate them, what species to plant and what effect they might have on yield. By 2016, Fredericks had seeded 100% of his ground going to soybeans and corn with cover crops. His initial goals were to be able to successfully implement a cover crop system that would enhance his soil, as well as the production capacity of the farm. He also wanted a system that is great for the environment and would maintain his farm’s profitability. Fredericks, who farms just 15 miles south of the Minnesota state line in a very cold climate, points out that what worked for him might not be the best for every single farmer. 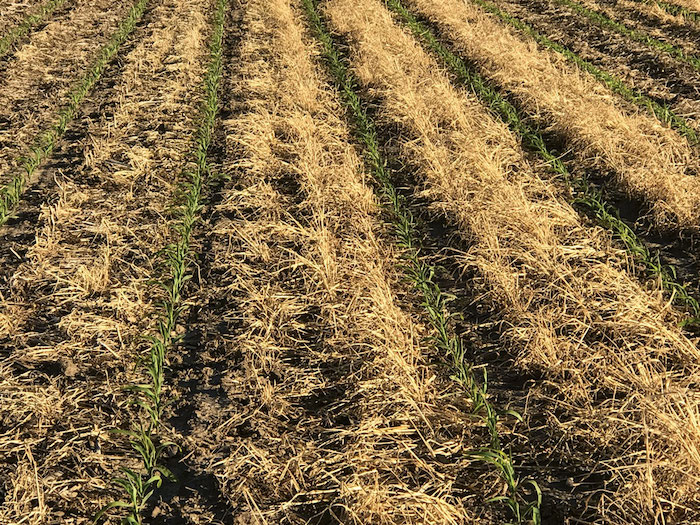 BETTER PROTECTED SOIL. With a 2.5% increase in organic matter over 25 years, Wayne Fredericks believes his ability to store water has risen. By adding cover crops and reduced tillage, he’s seen greater infiltration during rainfall events. With more residue left on the surface of the field, there is also a decrease in evaporation.

“We understand that across this country, there's extreme variations in soil and climate and crops,” Fredericks says. “It’s not going to be the same everywhere. Localization is the key to making it work — finding what works best for you and your location.”For Fredericks, using a combination of strip-till, no-till and cover crops allows him to substantially reduce his use of fertilizers, a growing expense for many farmers nationwide. He works with a Minnesota cover crop consultant who utilizes recommendations from the University of Minnesota.“The university feels that 70% of a broadcast rate will give you equal performance, so we're looking at what's being cost effective,” Fredericks says. “ That's basically a 30% reduction in the amount of phosphorus (P) and potassium (K).He also adds that the cover crops deserve a lot of the credit for helping cut back on fertilizer use, but it is the tandem use of cover crops and his strip-tilling that make his farm so productive.“There's nutrient value in that cover crop as it decomposes,” Fredericks says. “We're recycling some of those deep in the profile nutrients and bringing them back up to where they can be more readily available for crops. In the combination of the strip-till efficiency and then the cover crop, we've got our bases covered on nutrients. It's an easy place to save some money, and we got to credit that cover crop for doing some of that.”.Another key to Fredericks’ success is his commitment to collecting soil data to learn more about the soil health of his farm. He first started taking organic matter samples in the 1980s at the recommendation of his crop consultants. The original thought was that it would help him learn more about what herbicide rates to use.Fast forward two decades and Fredericks had started to use strip-till and no-till. After taking more soil samples around 2005, he started to see an uphill trend in organic matter. In 2007, 2011 and 2015, soil sampling identified a drastic increase in organic matter on Fredericks’ farm.“When we sit back and look at the big picture over that 25-year period, we saw organic matter average go up about 2.5% or roughly 0.1% per year on average,” Fredericks says.He believes the cause was reducing tillage.“If you reach out and talk to Iowa State University, University of Illinois or University of Minnesota, they'd all tell you the same thing,” Fredericks says. “You could simply increase organic matter by discontinuing your full-width tillage. Our cover cropping really didn't enter the picture until about 2015 to any great amount. This was basically a tillage study. It showed that organic matter is very fragile, and tillage is very destructive of organic matter.”According to Fredericks, traditional tillage has been so destructive that there is likely only 30-40% of the original parent organic matter left in tilled soils. He says had he used cover crops earlier, he could have expedited the process of increasing organic matter and improving the health of his soil.“It's taken me 25 years to get half that loss back,” Fredericks says. “We could have cut that time dramatically by instituting a cover crop or living crop in there that could capture carbon for another 4 months of a year in our climate. That would've been huge in moving that organic matter up at a faster rate.”Organic matter is crucial to increasing water availability for plants, especially in parts of the country where soil can get dry in July and August, such as northeast Iowa/southern Minnesota where Fredericks resides. During times like these, organic matter predisposes soil to absorb more water and allow less water runoff, which makes more water available for the crop.“Building organic matter is something surely we want to do on our farms because it's the bank that we can pull from to raise a good crop,” Fredericks says.For many farmers, the financial benefits motivate them to make the switch to no-till farming or to introduce cover crops into their system. And while Fredericks enjoys those benefits, too, there was a different driving factor that made him want to make the switch.“It's not about always saving money and getting the maximum yield,” Fredericks says. “It's also maintaining a good environment and protecting our water sources. I see some 300-bushel projects going on up here. It's heavy manure, heavy fertilizer and heavy fungicide, and I would hate to measure what's coming out of the tile lines on those farms. Without a cover crop, a lot of that's getting lost.”“That's been another aspect that some of our high-yield corn producers look at. They don't want to be short on end, but they also don't want to pollute. So I will, for sure, always have a cover crop following my corn to help pick up that nitrate that I didn't use.”Fredericks also offered some advice for those who might be trying to decide whether to try using cover crops or alter their tillage.“To look at a cover crop system, you have to look at your tillage system first,” he says. “It's really not a system that I think you're going to get a great benefit out of if you're going to continue heavy tillage or do full-width tillage to any extent. Some people might argue with me, but if we're going to really talk about building soil health and soil biology, we need to graduate away from intensive tillage as much as we can.”

(Video) Proof is in the Percentages with Cover Crops & Soil Health

How to Profit with One Pass Strip-Tilling