A move to strip-till by Ray and Dave Delhotal, has helped them better time fertilizer applications and improve soil health on their central Illinois operation

Over the five generations the Delhotal family has farmed in West Brooklyn, Ill., it’s been important for them to produce high quality crops while caring for the land in an environmentally sustainable way.

The father and son team of Ray and Dave Delhotal have spent the last few years taking aggressive strides toward those goals by adopting a two-pass strip-till system, as well as precision technology and a controlled-traffic system.

“Just this last year, operation-wide, switching to strip-till has saved almost $80,000 in labor, fuel and machinery costs,” says Ray. “All of a sudden you start putting this together and those pennies add up to dollars.”

In addition to the savings, they’ve also seen some yield advantages moving to strip-till.

“We saw a 10- to 40-bushel-per-acre yield advantage with corn when we switched to strip-till,” Dave says. “In some spots last year, we raised some of the best corn we’ve ever seen.”

Part of the push behind the switch from primarily conventional tillage to strip-till came when the Delhotals realized how healthy the soil was in the small portion of their operation where they used to no-till. 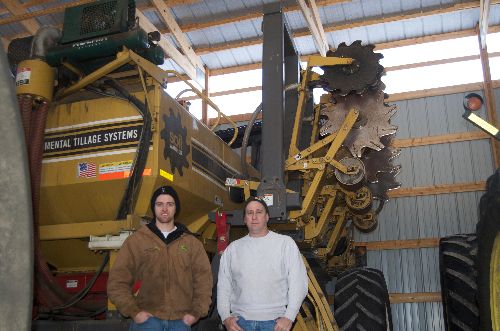 However, issues that they faced with their no-tilled corn, such as cold soils in the spring and reduced stands, dissuaded them from implementing the practice on a larger scale.

But Dave adds that they couldn’t deny how much they preferred the simplicity, increased soil health and biological activity of a no-till system, and that, coupled with their increasing difficulties with conventional tillage, eventually spurred a change.

“We were fighting root balls all the time,” Dave says. “In order to get ready to plant we had to do two passes with the cultivator. We just got to a point where we were so fed up with everything and said we had to do something different.”

Their first attempt at strip-till was with a homemade shank-type machine in the fall of 2009, which fell short of their expectations. They felt that the shanks were smearing their soil, and they often ran up against rocks as well.

“We have quite a few rocks, and the big cogs on the row units will just roll right over them and never bring them up,” Dave says. “We’re also able to literally run minutes behind the combine.

“We don’t ever have to worry about getting our strips done in the fall, and this year we finished building them and combining on the same day.” 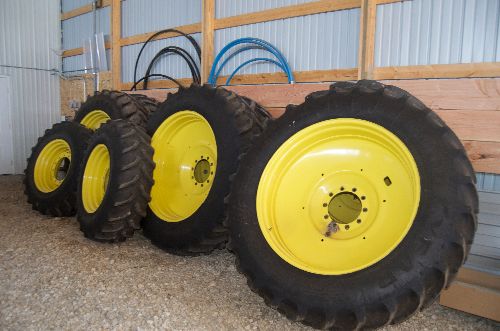 CONTROLLED ENVIRONMENT. As part of the Delhotal’s controlled-traffic system, they switched from dual tires to single 710s with a lower PSI on their planter tractor because they were having identifiable pinch row problems. They say the duals may have been costing them about 10 bushels of corn per acre due to compaction and pinch rows.

The Delhotals have preferred splitting their fertilizer application, applying about ¾ of the crops’ needs of potash and monoammonium phosphate (MAP) in the fall strips, 10 to 12 inches deep, and then the remaining phosphorus and potassium with urea in the spring during a strip-refreshing pass with the SoilWarrior.

“We mix the P and K with the urea because it has a tendency to be kind of sticky and clump up,” says Dave. “Urea is a lot lighter so it’s harder to meter, so we wanted something to flow along with it.”

Last spring, the Delhotals experimented with a pre-plant sidedress application of 32% nitrogen using a Fast Mfg. nitrogen applicator. They applied roughly 1/3 of the total N needed this way, 4 inches deep and 7 inches to the side of the strip.

The experiment worked well, and Dave noted that in a few check strips that the corn sidedressed pre-plant was one or two collars ahead in most places during the early growing season. However, this spring, they plan on applying Environmentally Smart Nitrogen (ESN) with the spring strip-till pass and banding the nutrients 5 inches deep in the 10-inch-wide strips.

One of the concerns Dave has about the repeating the pre-plant application is the potential for burn in the root zone ahead of planting.

“We’ll have the option with ESN, so we’ll really up the rate of nitrogen in the strips without having to worry about burn. So, we’ll be able to eliminate the pre-plant nitrogen pass.” he says.  Based on the increased accuracy and placement they feel they’re getting with strip-till, they’re hoping to scale back application rates of most of their fertilizer in the future.

Dave says using a two-pass system with the SoilWarrior also helps them deal with tough clays soils and compaction problems. 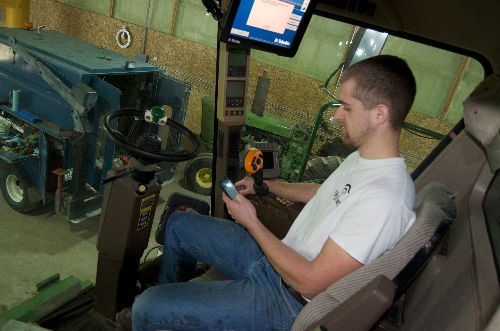 PRECISE PATH. A major contributor to the Delhotal’s strip-till success is implement steering and a reliable RTK signal. The combination of strip-till, controlled-traffic and a targeted fertility program has contributed to a 10-40 bushel per acre yield advantage.

“We’re at the start of the inlet swamp, so a lot of our continuous corn ground is blue clay and it really doesn’t want to dry out in the spring so it’s kind of nice to have the option to make the second pass and fluff the soil and warm it up,” says Dave. “It’s great to split up our phosphorus and potassium as well. We can go as deep as 10-12 inches in the fall where we have some compaction problems.”

As soil health improves with strip-till, Dave says he may consider switching to a one-pass system in the spring on the majority of their ground. But for now, they prefer a two-pass system to get rid of all the compaction from years of conventional tillage.

Strip-till has helped them solve some of their compaction problems, but Dave says they wanted to take it a step further with a controlled-traffic system. With some careful planning, they have already seen results.

“We’ve tried to commit to controlled traffic as much as we can, but sometimes it’s limited by the guy running the grain cart,” says Dave. “The strip-till rig, pre-plant applicator and our 24-row Kinze planter all run down the same rows, and then with the combine we got an extended auger put on so the grain cart can run on the same tracks, but you can only control so much.”

The Delhotals also switched from dual tires to single 710s with a lower PSI on their planter tractor because they were having pinch row problems that hurt yield. Dave says that he wouldn’t doubt that the duals were costing him about 10 bushels of corn per acre.

“We’d go out on the field and back and see the two pinch rows all year long,” says Dave. “Now, when we’re sidedressing, we’ve got two tracks in the field and that’s it, rather than a fully dualed-up tractor butchering the end rows.”

Plotting an accurate path through the field is essential to the success of the Delhotal’s strip-till system. They use Trimble’s TruTracker active implement guidance system on their strip-till rig, run through the FMX receiver in their John Deere tractor, which is guided by a DigiFarm RTK correction signal.

“For us, it would be impossible to strip-till effectively without implement steering and a reliable RTK signal,” says Dave. “Anyone who’s going to get into strip-till, especially corn-on-corn, the biggest recommendation I’d have is make sure that last year’s corn was planted with RTK, because that’s the challenge of your first year — following the previous year’s rows.”

Implement guidance was a substantial investment, but one which is paying off — especially in fuel savings.

In fact, the Delhotals had a convenient barometer for their early success. They were able to measure the amount of fuel they were using directly against some custom work they were doing for nearby farm managers.

“We disc-ripped about 400 acres last year because we still have a couple of farm managers who want conventional tillage, and I used an equal amount of fuel ripping those 400 acres than I used strip-tilling about 1,000 acres of our corn-on-corn,” Dave says. “That’s just in one year.”