The Cornelissen farm in Watford, Ontario is leveraging strip-till and cover crops to fight slugs, dry out soils and realize a yield advantage.

PARTIAL CONVERSION FROM NO-TILL. From left, George and his sons, Kyle and Michael Cornelissen farm a couple thousand acres in Watford, Ontario. The Cornelissen family farm had been no-tilling for 28 years before recently adding some strip-tillage to their strategy 7 years ago to help dry out wheat stubble so they could plant corn into it earlier in the spring.

Many farmers who convert to strip-till from a conventional-tillage system often laud the benefits of improved soil structure and savings on fuel and labor. For Michael, Kyle and George Cornelissen, who have 28 years of no-tilling behind them, they adopted strip-till for entirely different reasons.

The Cornelissens farm a couple thousand acres near Watford, Ontario, about half an hour from Port Huron, Mich., growing corn, soybeans and winter wheat.

about 7 years ago, they decided to start strip-tilling into wheat stubble. It wasn’t long before they started seeing advantages with the new system, but these benefits weren’t the traditional payoffs.

“One big issue we were having when we no-tilled corn into wheat stubble were the slugs,” Michael says. “With strip-till, it just seems to keep the slugs a little bit further away from the corn and we don’t have nearly as many issues with them.”

Cornelissen says the slugs don’t seem to like being in the blacker, warmer soil in the strip, favoring the colder, wetter residue left in the rows. He finds the strip-tilled treatment limits their interaction with corn planted in the strip.

Warming the soil up is a two-pronged benefit for Cornelissen, because while it discourages slugs, it also helps the seedbed dry out.

"We grow cover crops after winter wheat, so there’s always a lot of combined residue that can prevent the soil from drying out faster,” says Cornelissen. “This was a problem when we no-tilled, but not now that we strip-till.” 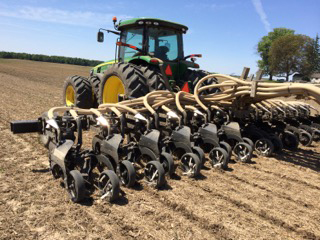 SPOOKING SLUGS. On the family farm in Watford, Ontario, Strip-tiller Michael Cornelissen runs his 12-row Dawn Pluribus strip-till unit 2 inches deep in his spring refresher pass — banding starter fertilizer. He’s found that switching to strip-tilled corn into wheat stubble, instead of no-tilling it, has helped him fight slugs and dry out soil quicker in the spring. The benefits have translated into a 5-15% yield advantage.

conditions. Now, their fall and spring strip-till passes clear the residue and dry out the soil to the point where it’s the first field of the season to be planted — something he says has been vastly beneficial.

“We are planting a lot earlier now,” says Cornelissen. “There’s been a 5-15% yield increase in the corn planted into our wheat stubble since starting to strip-till.”

The results seen with strip-till over 7 years have inspired the Cornelissens to get both a 12-row John Deere 2510S strip-till rig and 12-row Dawn Pluribus unit.

They use both rigs in the fall, but only use the Pluribus unit when they run a shallow 2-inch-deep refreshing pass in the spring.

They’ve also upgraded to John Deere RTK receivers and set up their own base station.

“We decided to put up our own tower because we could center it in a way that most of our land would be really close,” says Cornelissen. “It’s got good sight range with the antenna up at 175 feet — plus we’re already at one of the highest points in the county. We have three RTK receivers now and next year we’ll probably add another one. It made sense economically, and it also gives us some control over our own signal. It’s stronger and more reliable.”

Despite the significant investment, they still use a mixed strategy — strip-tilling into wheat stubble, but no-tilling mostly everything else. Cornelissen says

that’s likely to continue because his strip-tilled test plots haven’t shown encouraging results with yields anywhere except on wheat stubble.

helps it dry out a bit better, but on our sandy loams we still mostly no-till,” he says.

Cornelissen says that strip-till has allowed them to take advantage of cover crops better than conventional tillage might allow.

“We can leave our cover crops out for the winter, so we get less washing,” says Cornelissen. “Like us, a lot of farmers in the area grow red clover, but we don’t

plow it down in the fall and bury it. We get that ground cover because the clover grows up over top of the strips and lays down, so it keeps it pretty well covered until 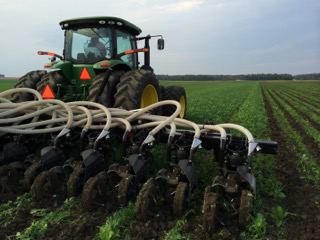 EXPERIMENTING WITH COVERS. Cornelissen usually strip-tills into his cover crops and wheat stubble in the fall, but red clover continues to grow in the rows and provide ground cover throughout the winter. However, in some onfarm test plots he’s left cover crops untouched in the fall in hopes of pulling excess moisture from the strip.

Strip-till also helps avoid some of the risks associated with cover crops for no-tillers.

“We’re facing less risk with cover crops if we leave them until the spring because after refreshing the strips there’s no cover crop where the seed is going, but

we still get the soil structure and nutrient recycling benefits,” says Cornelissen. “We’re also getting nitrogen credit from the red clover.”

In an attempt to pull yet another benefit from cover crops, Cornelissen has left some untilled through the winter on a few test plots. His theory is that they may

help further reduce moisture in the strip and lead to earlier planting.

take out the cover crop in the fall,” he says.

Before integrating strip-till, the Cornelissens broadcast all their fertilizer, but now they’re using variable-rate application through the strip-till bar to build up fertility levels in low areas.

“Right now we aren't putting anything down in the fall, but this year we’ll be variable-rating our potash in the fall,” says Cornelissen. “In the spring we variable-

sulfate and 40 pounds per acre of potash.”

Although the application rates he’s using haven’t changed since switching to strip-till and variable-rate application, Cornelissen foresees a day where that could

“This is only our second year applying fertilizer down with the strip-till rig, so we haven’t really dialed back yet,” says Cornelissen. “We’re still trying to build up

some of those low zones, and I don’t think we’ve had the opportunity to cut fertilizer rates yet. But I’m not saying that we never will.”