Moving from ridge-till to strip-till helps Steve Frahm get the most from his soil and push corn yields to near 250 bushels per acre.

STRIP BUILDING FLEXIBILITY. Ashland, Neb., Farmer Steve Frahm uses both a 16-row Twin Diamond Industries Strip Maker and an 8-row Kuhn Krause Gladiator strip-till unit to build fall strips. He likes the versatility of having a unit with a coulter system and one with a shank setup to handle diverse field conditions.

As Steve Frahm began adding acreage to his irrigated Ashland, Neb., farm more than a decade ago, one mounting challenge was finding the time and labor to continue ridge-tilling.

Seeking a more efficient method, Frahm adopted strip-till on his 1,600 corn and soybean operation in 2003. Like many farmers who’ve made the switch to strip-till, one of Frahm’s biggest reasons was the labor savings and yield consistency strip-till offers.

“I really liked ridge-tilling, but now there’s just no one around to cultivate,” says Frahm. “So the next best thing was strip-tilling. The yields seem to be about equal, but we can get it done in the fall and it’s not quite as hectic.”

Being able to strip-till at 7 miles per hour across the field, more than compensated for the lack in manpower and after nearly a dozen years, Frahm is seeing the cumulative effects of long-term strip-till.

Although Frahm admits that he’s not often faced with excessive rainfall, 2015 has been a bit of a deluge so far. Some farmers in the southern part of the state were faced with replanting scenarios. Frahm, on the other hand, has noticed that his strip-tilled fields held up significantly better than they had in the past.

“We’ve got some clay loam and on our sloped bottom ground out there we’ve got gumbo,” he says. “I just can’t strip-till that in the spring because it’s so wet. But strip-tilling it in the fall clears away the trash and fluffs up the soil we want to plant into so it’s more exposed to the sun. The advantage to this is that we can get into the field a little bit quicker to plant.” 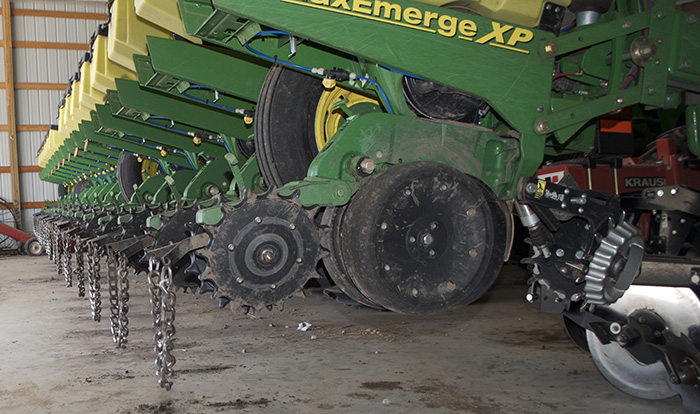 MANUAL SYNCHRONIZING. While Frahm’s 16-row John Deere planter matches up nicely with his 16-row Strip Maker, it takes a bit more precaution to make sure it syncs well with his 8-row Gladiator. For this reason, Frahm feels that RTK essential for effective strip-tilling. Even so, he likes to carry a tape measure to periodically check his guess rows in the field.

Frahm makes use of two different strip-till bars — a 16-row Strip Maker from Twin Diamond Industries and an 8-row Gladiator from Kuhn-Krause. He is pleased with the performance of both rigs, but he’s noticed that each have their own distinct advantages.

For corn-on-corn acres, he prefers the Gladiator unit. “The trash whippers behind the front coulter do a nice job of clearing a path and I haven’t had trouble with plugging in higher-residue conditions,” Frahm says.

Frahm likes using the Strip Maker to build strips that are less likely to dry out when there isn’t quite so much rain. While the Gladiator row units are equipped with a rolling basket on the back, the Strip Maker has press wheels instead.

“I like using those in the spring when we don’t finish building strips in the fall,” says Frahm. “They make a nice strip and press it down, so if we end up with a lot of hot, dry wind, the strips won’t dry out.”

Currently the Gladiator is set-up with shanks and the Strip Maker with coulters. Frahm is on a one-pass system, preferring to finish building his strips in the fall. But, the added versatility of having a coulter set-up option also helps him position himself well to respond to a situation where he has to build spring strips.

“When it’s wet in the spring, I don’t need a shank to get in deep, because I’ll just pull up clay,” says Frahm. “Even with the shanks I only run 6-8 inches in the fall. I really haven’t found any reason to go any deeper than that.” 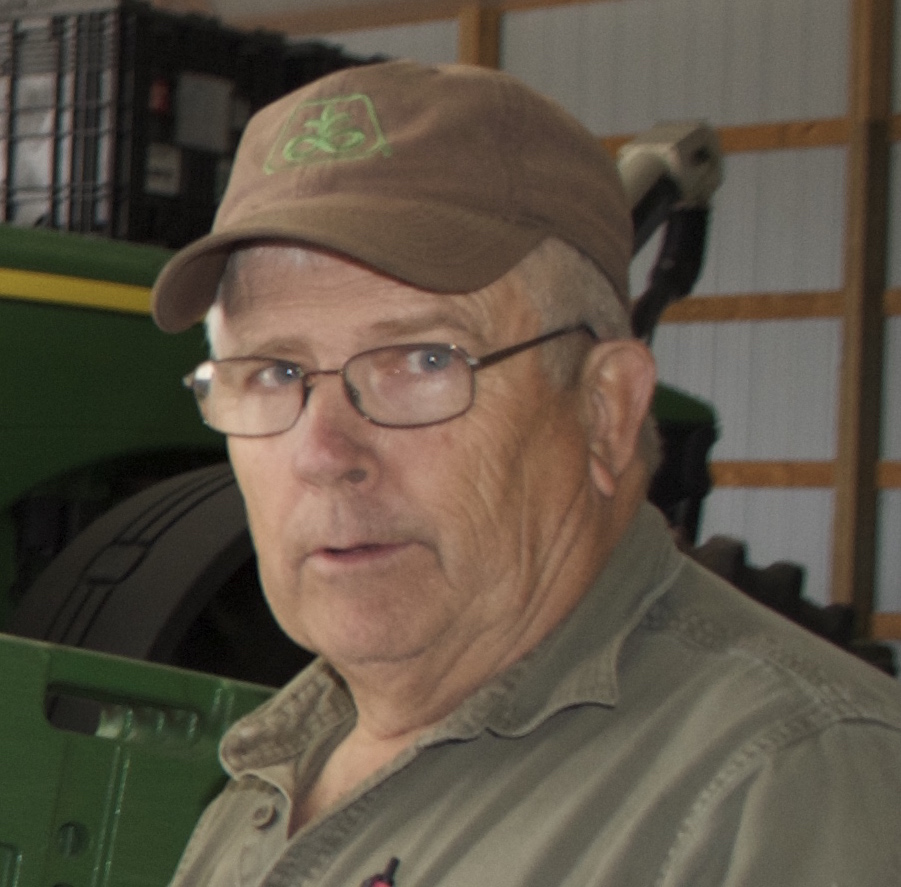 “Often, we’ll move over our strip right next to the soybean stubble, especially if we’ve had a wet fall and the combine compacted the soil…” — Steve Frahm

Although Frahm doesn’t yet apply fertilizer through his strip-till bars, he does apply the majority of his fertilizer in the fall.

“Once we have the ground’s nutrient levels built up, then we just do a maintenance program that’s prescription-based,” says Frahm. “We have our crop scout come out to sample and we follow his suggestions.”

In the fall, Frahm broadcast applies phosphate, zinc and potash, with amounts dependent on his crop scout’s recommendation. In the spring, he follows up with a 32% nitrogen application, half of which is broadcast with his herbicide and the other half through fertigation on his center pivots..

“When we strip-till we incorporate some of that fall-applied fertilizer,” Frahm says. “Then we’ll come back in the spring with the pivots and we’ll spray nitrogen [N] and sulfur, and then if we need to, we’ll irrigate.”

For the past few years, because of favorable rainfall conditions, Frahm says he’s been trying for higher yields and he ends up applying about 200 pounds per acre of N.

“We could have dialed back the application rates if we were looking to just maintain yields,” he says. “But we’re entering that 240-250 bushel per acre or above range, so I think that calls for a consistent application of N to sustain those types of yields.” 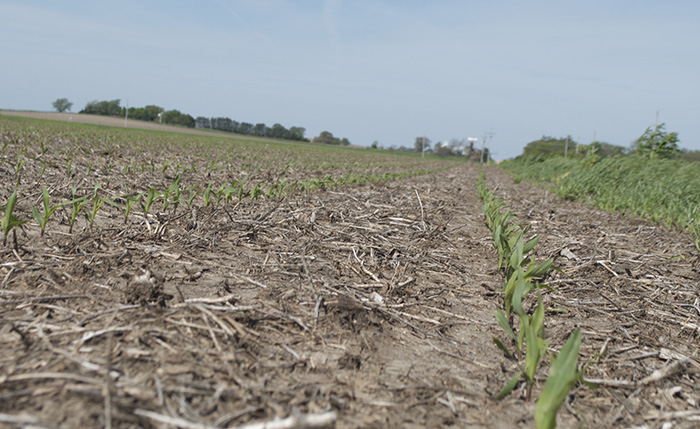 PRECISE PLACEMENT. Frahm feels that the planting ‘sweet spot’ is 4-6 inches offset from the center of the row. Using this practice has led to a 7-bushel per acre yield advantage for strip-tilled corn.

Frahm also notes that RTK is crucial if a farmer is using a strip-till bar with a different number of rows than their planter. He has a 16-row John Deere planter that syncs up quite nicely with his 16-row Strip Maker, but even with RTK, he still is careful to watch his guess rows while working with the 8-row Gladiator.

“The points can wear on you strip-till unit and some guess rows might end up being a little more narrow or wider,” he says. “If everything is working like it’s supposed to, I don’t have to pay too much attention, but I always like to have a tape measure in the cab with me — it’s worth the extra precaution to hop out and measure every once in awhile.”

Row placement is especially important to Frahm, who feels that there is a planting ‘sweet spot’ just a few inches off the center of the row. He often bumps over the row in order to avoid planting into compacted soil.

For strip-tilled corn, he’s noticed a 7-bushel per acre yield advantage in years where the rows are heavily compacted.

“Often, we’ll move our strip right next to the soybean stubble, especially if we’ve had a wet fall and the combine compacted the soil,” says Frahm. “I usually bump over about 4-6 inches from the center of the row, because it’s more mellow soil deeper down.”