Mixing Tillage Techniques Makes the Most of Strip-Till

To meet the needs of their diverse farm conditions in northern Illinois, the Book family use strip-till as a foundational farming system.

The Book family, who farms about 2,400 acres in Harvard and Union, Ill., make use of a variety of tillage methods. They no-till acreage 16 miles from their primary operation because the soils are sandy and the organic matter is only around 2%. On their corn-on-corn acres with heavy residue and sometimes close to 20% organic matter, they vertical till and chisel plow. However, they get their best results from the 600 acres of first-year corn that they strip-till.

“One of the biggest benefits I’ve seen with strip-till is the soil warming up quicker in the spring, creating better planting conditions,” says Kyle Book. “The strips dry fast on top so we can plant early, but there is plenty of moisture still in them to help with germination. It seems less likely to crust over as well, so it holds up better than our worked ground if I get a hard pounding rain after we plant.”

Book, along with his father Michael, have been strip-tilling for more than 20 years. Being sparsely staffed and not having someone dedicated specifically to running their 12-row Bauer bar with Redball row units during the fall has made it difficult to cover all their acres before spring.

“It’s mainly just my dad, another operator and myself,” Book says. “We have the equipment, but labor and weather are the two factors keeping us from strip-tilling more of our corn.”

Being strict fall strip-tillers and having limited manpower often makes for a busy autumn, resulting sometimes in some strip building in the snow.

“We might be unique doing this, but we’re not applying any fertilizer, just building the strip,” says Book. “The snow being there acts as an insulator, helping to keep the frost out. Because of a late fall, it was late December last year by the time we finally finished strip-tilling.”

To Book, the hustle is worth the effort though. He feels that a single fall pass amplifies the impact of strip-tilling’s inherent benefits — avoiding a pass that’s likely to cause compaction, while opening the planting window.

“Not having to run a tillage pass across the field in spring is huge, because that’s the compaction pass in my mind,” says Book. “Also, if we have a cool, wet spring, I’ll be happy that our strips are already built.” 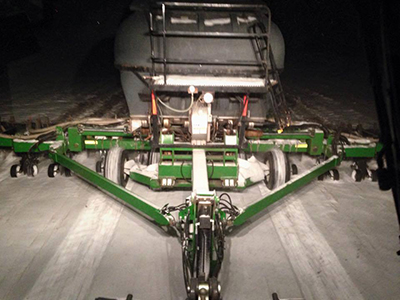 SNOW STRIPS. Being a strict fall strip-tiller, sometimes Book ends up building strips in the snow if conditions dictate it. He will be ready to plant as soon as the strip dries, and one less pass in the field during the spring reduces compaction.

Fitting vertical tillage, chisel plowing and strip-till into the fall is hard enough, but Book also likes to spread some variable-rate fertilizer at that time too.

He has experimented with banding fertilizer in the strip in the past, using a Montag dry fertilizer cart mounted on his strip-till rig. He would prefer to band his fertilizer, but broadcasting across all his acres at once is more time efficient than fertilizing the strip-tilled acres separately.

“We variable-rate broadcast fertilizer in the fall and we’ve worked with our crop scout to built some fertility maps,” says Book. “We apply diammonium phosphate (DAP) and potash based off soil sampling on a three year cycle, and also spread lime when needed.

Book finishes out his fertility program during planting and sidedress. He applies 15 gallons per acre of 32% nitrogen (N) in 2-by-2-inch placement and also applied 3 gallons per acre of an N, phosphate and potash blend (6-24-6) with a micro-nutrient package with his 24-row Case IH 1250 planter. He’ll then sidedress a straight rate of 180 pounds per acre of anhydrous.

Book is looking to purchase a strip-till rig with improved residue management, because his Redball units struggle prohibitively with corn-on-corn ground. But in the meantime, he has tinkered with the rig to get the most mileage out of it.

“The first few years we had the Redball units, we ended up taking off the finger coulters on them designed to move the residue aside,” says Book. “The fall of 2009 was just awful — mud was just getting clogged and balled up left and right.”

Removing the finger coulters was beneficial in two ways; it lowered the incidence of clogs and helped facilitate a better berm.

“That style of coulter was moving too much dirt and residue away from the berm, and I wasn’t getting a consistent mound,” says Book. “The closing disks in the back weren’t able to grab what the finger coulters in the front had thrown off the strip.” 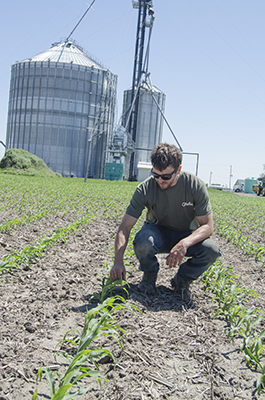 WIDE OPEN PLANTING WINDOW. Book says that the biggest benefit he’s seen with strip-till is optimum plating conditions and an earlier planting window. He’s also noticed that his strips are less likely to crust over, holding up better than his cultivated ground if he get a driving rain after planting.

Another modification that had a double impact was installing an aftermarket knife cover sold by Poly Tech Industries.

“Putting the covers on the knife shins helped cut down on mud and residue build up on the shank sides,” Book says. “But the main reason was to help protect the fertilizer tubes from wear. It’s not perfect, but it’s better.”

He is certainly no stranger to customizing equipment to his liking. After purchasing the new planter this year, he stripped it down and added Precision Planting’s DeltaForce hydraulic cylinders, vSet meters for seed singulation and vDrive to drive the motors.

Another equipment particularity that Book values is using tracked vehicles to pull his strip-till rig and planter.

“With our two tracked Caterpillar tractors we’re able to keep the straightest and most consistent passes,” says Book. “I like them for reduced compaction, but there is more power to the ground too.”

Book’s routine of mixing tillage methods has allowed him to realize a few subtle differences in the way strip-tilling stacks up to no-till and conventional tillage.

“When I’m out late building strips in the snow, my guess rows end up being a bit off sometimes,” says Book. “Also, I’m following a 12-row strip-till bar with a 24-row planter, so sometimes I miss the strip a bit on a guess row.

“Off the strip, I plant into more residue, and wetter soil — basically no-tilling, and I’ve noticed an easy 25% reduction in stand in those rows.”

This year, he says corn planted off the strip came up about a week behind the corn in the strip, and has already suffered from some yellowing.

Also, before buying a new planter this year, Book used to plant twin-row corn on both strip-tilled and conventionally tilled ground. He’s noticed some differences in their performance.

Putting the Pieces of a Progressive Strip-Till System into Place