Spreading out the Strip-Till Workload to Maximize Productivity

Princeton Ill., strip-tiller Jim Rapp capitalizes on the benefits of both fall and spring strip-tillage with a flexible approach and timed fertilizer applications.

MANPOWER MANAGEMENT. Although Rapp works alongside his sons Nick and Ben (not pictured), they are still pressed for manpower during harvest. This is part of the reason Jim hires a fleet of custom strip-tillers to start building berms immediately behind the combines.

Farming in Princeton, Ill., with his sons, Nick and Ben, Jim Rapp re-adopted strip-tilling about 4 years ago, after a brief trial in the 1990s prior to the development and widespread adoption of GPS navigation.

“That was our limiting factor at the time,” says Rapp. “It was before guidance was coming out and there was a 2,000-3,000 seed population difference where I had built strips when I couldn’t keep on the row.”

With the advent of RTK, Rapp saw renewed potential in the practice and took it up once again — so far he’s been able to maintain the yields he'd seen with conventional tillage, and even boost productivity in some lower-producing areas. Additionally, he’s seen savings in fuel and fertilizer.

“It was painful dumping 150 gallons of fuel in the tractor every day, but now we’ve been able to shave off several passes,” says Rapp. “We could probably put less nitrogen on, but we haven’t yet. However, we’ve been able to cut back with dry placement in the row.”

The Rapps farm about 3,000 acres of corn and soybeans — strip-tilling about 1,600 acres of corn. Rapp feels that building a strip-till program from scratch has been a challenge, but he’s found a system that works well. That said, in search of even better practices, he often finds himself looking for opportunities to adjust the time of year he builds his strips and the times he applies fertilizer.

Picking a Season for Strips 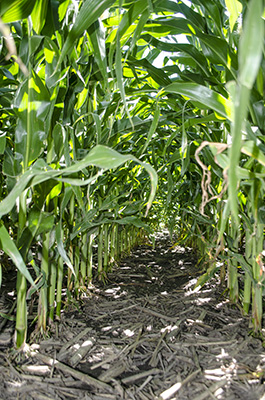 STAYING ON THE STRIP. Rapp’s first brush with strip-till was back in the 90s. Although, he says he felt that he was being limited by not planting 100% into the strip, since adopting RTK, he’s maintained his yields and even built up low spots.

From the beginning, Rapp dove into strip-till headfirst when he bought a 24-row Dawn Pluribus unit to synchronize with his 24-row John Deere 1770NT CSS planter. Rapp favored Dawn’s coulter set-up for the seedbed it creates and ease with which it cut across the field.

“We’re only pulling the rig with a front wheel assist tractor and the horsepower requirements for some of the knife rigs are just incredible, especially for 24-rows” says Rapp.

He confines usage of the Pluribus to the spring though. He found that attempting to use it in the fall resulted in some washing down the strips and reduced mounding of the berm in comparison to other bars.

When he was deciding whether or not to be a fall or spring strip-tiller, Rapp was torn. On one hand, he was nervous that he’d see fall applied nitrogen (N) leaching and he wanted an opportunity to fluff and dry out strips in the early spring ahead of planting. But, he also likes having the ability to spread his fertilizer application out and coming into spring with pre-built strips.

To draw on the benefits of both, Rapp runs a fairly sophisticated series of custom strip-tillers in the fall, and comes back to refresh the strips himself in the spring.

Already pressed for time during harvest, Rapp still likes to follow the combines with a strip-till rig closely. To do this, he brings on some help.

“I hired four different custom strip-tillers last fall,” says Rapp. “One of the guys uses a 12-row Kuhn-Krause shank-type bar and the three others use 16-row John Deere bars with mole knives. I don't always use that many, but this last fall it worked well for conditions”

Rapp likes the flexibility afforded to him by hiring out the fall strip building. He can have multiple strip-tillers in the field following harvest to finish the job quickly and stay out in front of the fall workload. Also, he’s able to avoid the costly investment of another 24-row strip-till bar more suited to the fall, not to mention the increased horsepower he’d require to pull that many shank-type units, which likely result in the need for a bigger tractor.

“I’ve always been a believer that I don’t always have to own everything, on top of being extremely expensive, so much of it depreciates quickly,” says Rapp. “We contract out our spraying as well.” 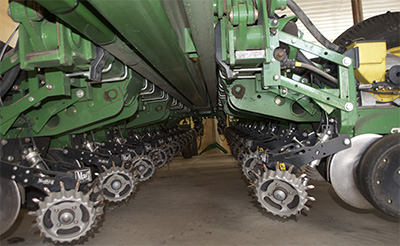 ON THE MONEY PLANTING. For Princeton Ill., strip-tiller Jim Rapp, it was doubly important to buy a 24-row strip-till rig to match his 24-row John Deere 1770NT CSS planter. He wanted to make sure that it would be easy to plant perfectly into the strip, and also cover more ground faster in the spring.

Keeping track of that many implements in the field poses a challenge when it comes to matching up the strips during his spring pass. Although he and his contractors all use Deere’s GreenStar RTK system, Rapp says that in practice the strips don’t always match up 100%.

As long as the match is perfect between his spring refreshing pass and the planter though, Rapp says he doesn’t see any yield drag. Making sure the fertility program syncs up does take some record keeping though.

“One of the custom strip-tillers just applies anhydrous ammonia on our soybean ground,” says Rapp. “Another applies some anhydrous and about 100 pounds per acre of granular diammonium phosphate (DAP).

“We do a lot of combinations depending on what soil tests show the need is, but we do try to wait and get a lot of our N applied during the growing season instead.”

During his spring pass, Rapp dribbles about 30 gallons per acre of 32% N with the Pluribus unit on each side of the row. During planting he applies an additional 3½ gallons per acre of pop-up fertilizer with Capture insecticide, through Keeton seed firmers.

Although he’s still fairly new to the practice of strip-tillage, Rapp says his system has been producing the results he’d aimed for at the start. But he’s by no means becoming complacent. There is always room for upgrades.

Recently, Rapp had the poly tank on his Pluribus swapped for a stainless steel one, and he also plans to work around some plugging issues he faced with the unit.

“With the way we’ve been delivering the 32% N, it goes through a check valve and then through a Y spliter and the it drops to the ground,” he says.  “We’ve had issues with those orifices plugging because gravity isn’t enough to force out any blockages.

“We’re changing that. We’re going to put the screw-in orifice tips at the ground and try to keep pressure at that point.”

Rapp will run some test rows in the fall after the customization is complete to make sure it works better. If not, he says he’ll have enough time to switch it back before he needs to run the rig in spring.

20 Tips For Starting Out in Strip-Till