By Clair Urbain posted on October 27, 2015 | Posted in Precision Agriculture
Sommerfield family: The Sommerfield family in Mazeppa, Minn., have a very forward-looking view of precision agriculture. Rod (far left) believes the best evolution path is toward smaller, more autonomous machines that will look at the field microenvironment and adjust crop inputs for optimal yield on the spot. 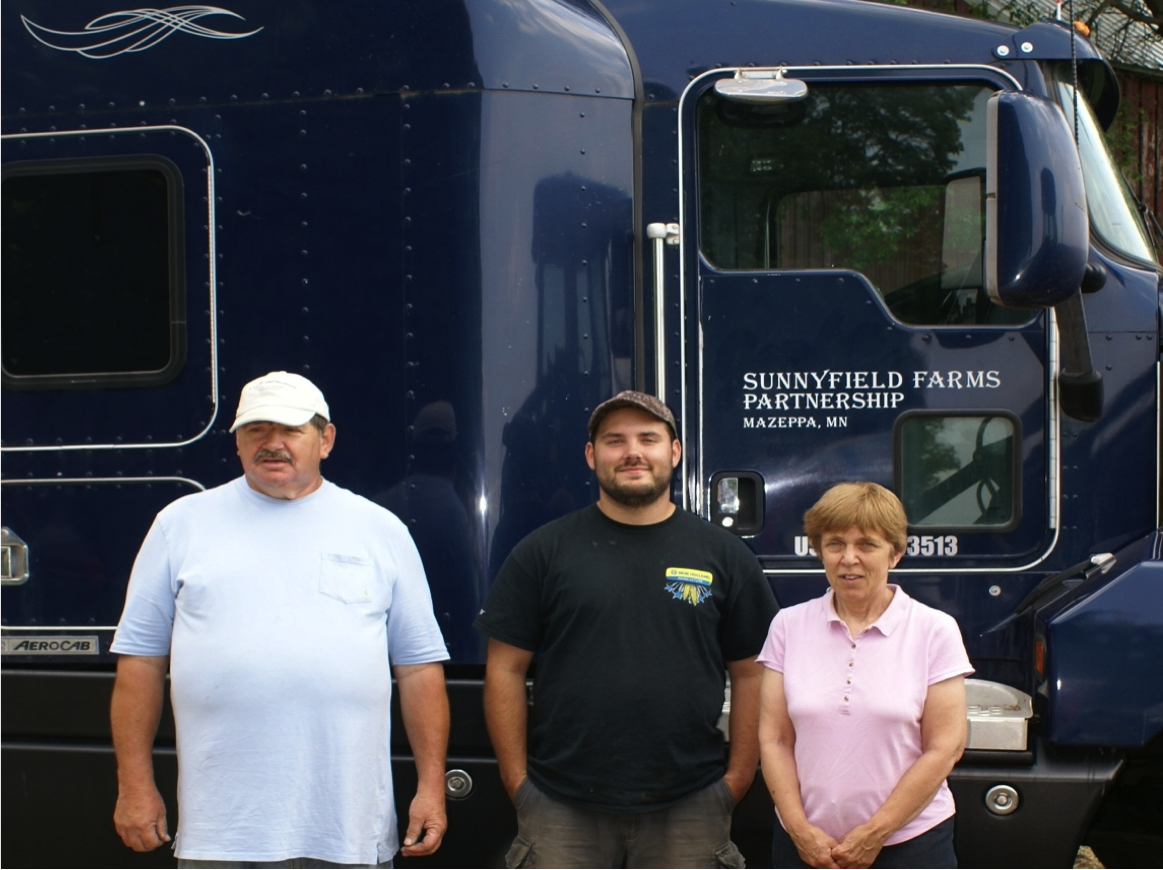 Mazeppa, Minn., farmer Rod Sommerfield has a very forward-looking view of precision agriculture. He believes the best evolution path is toward smaller, more autonomous machines that will look at the field microenvironment and adjust crop inputs for optimal yield on the spot.

But until that happens, he and his son, Rick, will look to improve soil health and yields, utilizing today’s technology on their 500-acre corn and soybean operation. So far, it’s been working well. When compared with other northern Midwest farmers, they use about half the amount of nitrogen (N) to grow a bushel of corn.

Soil conservation and regeneration are important to them. “Our fields average 6% slope, and we have some flat ground on that, so we farm some fields where it is hard to even stand up,” Sommerfield says.

They no-till soybeans and strip-till corn with a Redball strip-till rig and Great Plains twin-row planter, both 30 feet wide. Their sprayer, which they built, has a 60 foot boom with an EZ Boom auto-section shut-off.

“We can’t go any wider with the sprayer because our fields are so steep,” Sommerfield says. The sprayer is mounted on a New Holland TV140 bi-directional tractor.

The boom is mounted on the loader brackets and they operate the tractor in reverse so the boom trails the tractor. “The articulated steering makes getting lined up for the next pass very easy and accurate,” says Sommerfield.

Their precision farming program is controlled by a Trimble 500 system that they bought 6 years ago. While they have moved the monitor between their tillage tractor, sprayer and combine, they recently purchased a John Deere 8210T that they plan on using as the planting tractor as well as for applying pre-emergent weed control.

“It is supposed to be precision-ready, but we will need to work on that this winter to make sure everything works together,” he says.

While the twin-row planter had two section shut-offs, the Sommerfields were able to use the positive solenoid shut-off controls from the Trimble controller to break the planter into three-row sections for less than $1,000.

“We used the signal from the sprayer solenoids to control the row sections,” he says. “It works well.”

The Sommerfields subscribe to an RTK signal, but find that in their hilly ground, the signal can be spotty.

“It’s especially a problem if we can’t get the signal on the first pass in the field,” Sommerfield says. “When that happens, we are totally lost.”

To maintain field position, they use the planter row markers as a backup to the RTK signal. “It’s very frustrating to lose the signal, then we have to stop and restart, especially when we’re are under pressure to get the crop planted,” Sommerfield says. “We find the row markers allow us to keep going.”

The Sommerfields say they’ve also been disappointed with their dealer support after initial installation of their current guidance system.

“My brother, Rick, handles most of the precision farming equipment,” Sommerfield says. “We probably would have better RTK accuracy and access if our signal was on the Russian GLONASS system, but we can’t justify that kind of equipment upgrade on our size of operation.

“I truly believe we are in the infancy of using precision in farming, but I am not sure how to take advantage of this technology. I think we need to look to smaller, more autonomous equipment that’s less expensive but helps regenerate the soil while getting best yields. Big, heavy equipment isn’t good for the soil and right now, that is the only way we can rationalize the cost of precision equipment.”