BIOLOGICAL TILLAGE. Mulock has his John Deere 1850 air seeder set up to plant two sets of 8-inch twin rows. On the strip, he plants larger rooted cover crops like rapeseed, tillage radishes, oats and legumes. On the rows in between the strips, he plants higher carbon cover crops like cereal rye, sorghum Sudangrass and hairy vetch.

Dustin Mulock and his father, Carl, who farm near Woodville, Ont., have been building and refining their combination no-till/strip-till system for over a decade. Jumping from different pieces of tillage equipment, practices, inputs and cover crops has led them to what Mulock refers to as “bio strip-till”.

Originally no-tillers, the Mulocks decided to transition to twin-row corn and soybean strip-tilling in 2005 in an effort to build nutrient levels in their mostly sandy loam soil.

“We always liked not disturbing the soil, but we were feeling like we weren’t truly cycling the nutrients,” says Mulock. “When we noticed that we were in a progressive downtrend with nutrient levels, it was time for a change.”

They started with Progressive row units mounted on a John Deere 7000 planter frame which worked well in the spring, but over time they decided that it was too shallow. It often dried the top 3 inches of soil too much and wasn't placing fertilizer at the desired depth.

They switched to an 8-row Rawson machine which offered a 15-inch shank. With these units they saw much better fertilizer placement, but found that they were too deep, which was a concern because of horsepower requirements and increased erosion on hilly ground.

The Mulocks then switched to an 8-row Soil Warrior from Environmental Tillage Systems, which also had its advantages and drawbacks.

“Basically, we weren’t getting fertility down deep enough again, and we also prefer a system that uses a single pass” says Mulock. “We also tried Deere’s 16-row 2510S which ran about 8 inches deep and placed fertilizer at a good depth around 3 to 4 inches.” 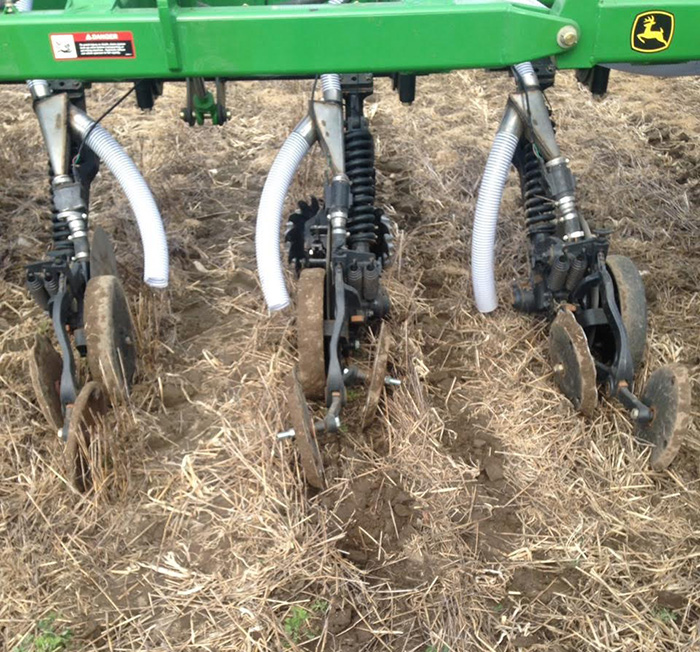 DIY RIG. Not getting what he was after with other strip-till rigs, Dustin Mulock decided to modify a John Deere 2510H nutrient applicator to fit his needs. The rig uses a single disc fertilizer opener with a 23-inch blade, a dry fertilizer tube that runs behind the anhydrous boot, sealing wheels moved 4 inches apart and Dawn GFX row cleaners with a custom made brackets.

However, even with the successes they’d started to see with strip-till, they once again began to shy away from the idea of agitating the soil too much.

“We wanted to leave our soil aggregates intact and not destroy our mycorrhizal fungi and root structures. Plus, pulling up rocks in our field was starting to become a significant issue,” says Mulock. “So, the choices we had were to one, ignore our dilemma and keep picking rocks and destroying soil structure. Two, return to no-till and abandon the fantastic benefits of strip-till. Or three, innovate a way to deliver the nutrients precisely, without destroying root channels, earthworm channels and soil aggregates.”

They decided to innovate. In early 2015, the Mulocks got a Deere 2510H 15-row nutrient applicator and modified it to a 16-row strip-till bar that delivers dry fertilizer up to 5 inches deep.

“We added a row and shifted it over. The rig uses a single disc fertilizer opener with a 23-inch blade, simply a larger copy of the traditional Deere no-till drill unit,” says Mulock. “It basically slices through the soil rather than tilling it up.”

They removed the anhydrous equipment because they don’t use any and attached a dry tube that runs behind the anhydrous boot. It’s able to shoot dry fertilizer into the trench and get closed up with two sealer wheels that run behind it.

They also widened the sealing wheels by 4 inches to offer a little bit of disturbance in order to texture the soil and still get a drying and warming effect.

Mulock also added Dawn GFX row cleaners with custom made brackets so he could clean the rows without gouging the soil. The sum total of his innovation and experimentation led to a piece of equipment that hit all of his requirements and then some.

After a year of testing the new rig, they no longer have any issue with turning up rocks. There has been no yield drag, and Mulock was able to eliminate the need for a 425 horsepower tractor and replace it with a 275 horsepower one. This change also came with a fuel savings of 6 gallons per acre and the ability to nearly double their strip-tilling speed, from 5-6 miles per hour to 10.

Mulock suspects that part of the reason his new custom strip-till rig works so well is because of the changes he’s made with cover crops alongside it. In 2012, he started experimenting with a mix of about 12 different species.

He says that he’s able to biologically make up for tillage lost on his much less aggressive modified rig and start dialing down fertilizer rates simply by strategic use and placement of cover crops. 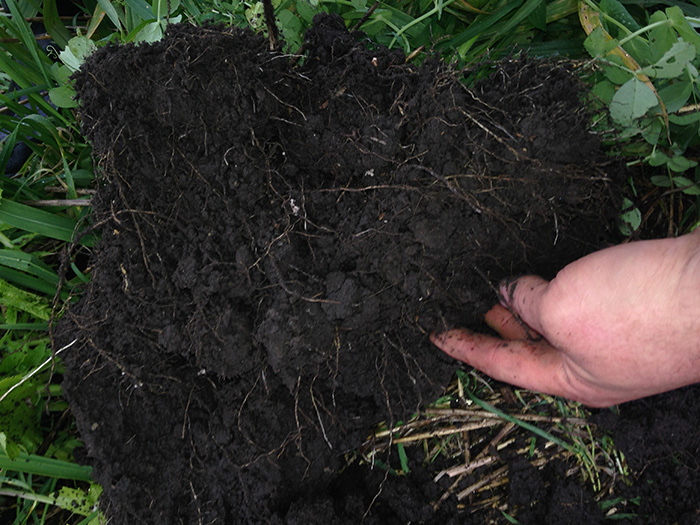 NATURAL NITROGEN. Mulock has started dialing back his nitrogen rates because he’s using 5 or 6 legumes in his cover crop mix right now. He’s still in the process of analyzing data to determine how much nitrogen the legumes are creating, but he plans to reduce his 2x2 planter application and sidedress rates as much as possible.

Mulock has his air seeder set up to plant two sets of 8-inch twin rows. On the strip where the corn or soybeans will be planted the following fall, he plants larger rooted cover crops like rapeseed, tillage radishes, oats and legumes. On the rows in between the strips, he plants higher carbon cover crops like cereal rye, sorghum Sudangrass and hairy vetch.

“All the cover crops in the strip will push straight down and make nice root channels for the corn, and they will all winterkill,” says Mulock. “They’re basically doing all the work to find the fertilizer that I just put in and hold on to it. They'll also cycle the chemical fertilizer into plant usable nutrients, increasing the nutrients available to our following crops.

“Because they are planted 8 inches apart, they actually form a mat of roots inside the strip by grow close to each other and get tied up. This works well because when the ground freezes it causes these roots to heave and fracture the twin rows together acting almost the same way tillage does in loosening the soil.”

In the rows between the strips, the higher carbon cover crops will survive the winter unlike the ones in the strip. Mulock says that as they come back, the early growth will recapture nutrients that are leaching from the decaying cover crops in the strip and it'll also reignite dormant microbial life earlier in the growing season.

“As the tillage radishes rot they’ll be releasing phosphorus (P), potash and nitrogen which the cereal rye will sponge up. When we kill the cover crops in the row, they lay down and give the tractor something to drive on, trap some water and resist some weeds too,” says Mulock. “The N from the hairy vetch is available to the corn right away, and the dead cereal rye will start decaying after it is killed will sort of time release its nutrients.”

Right now, Mulock applies around 150 pounds per acre of 28% nitrogen per year spread between a 2-by-2-inch application with the planter and a sidedress application between V4-V6 stage, but he hopes to replace as much of that as possible with legume cover crops.

“We are starting to dial back N because we’re using 5 or 6 legumes in our mix right now, but we’re still in the process of collecting data on exactly how much N they’re producing for us,” says Mulock. “On the nutrient end though, we were able to go from 120 pounds of potash down to 80 and 90 pounds of P down to 70. Even with those savings, we’ve seen our corn yields come up about 25% and counting, and our soybean yields have risen 15% from the days when we were pure no-till.”