Starting Out In Strip-Till

Evening Out Emergence with a Strip-Till System

EMERGING BENEFITS. One of the primary goals achieved by Yutan, Neb., farmer Kody Karloff 2 years after transitioning to strip-till from no-till is more consistent and even early plant emergence.

When Kody Karloff transitioned from no-till to strip-till 2 years ago, he hoped the move would minimize early-season inconsistencies with corn and soybean emergence. Farming 3,200 acres of rolling hills and sloping ground in Yutan, Neb., one of the challenges Karloff encountered during 15 years of no-till, was finding an ideal intersection between his planting window and field conditions.

“I’d get into different soil temperatures and moistures across the board trying to plant and it just never seemed to work. It never seemed to be that perfect time,” he says. “It was always a little wet or a little hard. We’d get corn that was at the V2 stage and then two plants away it would be just spiking out of the ground.

“It was very uneven, so that’s what prompted us to try strip-till as a way to create a better seedbed and more consistency. So far, we’ve been able to accomplish both.”

While Karloff struggled with syncing up his no-till planting schedule to match field conditions, his move to strip-till was well-timed. Above average spring rains during his first 2 years proved to be a good test of how well the system worked in adverse conditions.

One of the early benefits Karloff saw was less water runoff and quicker infiltration into soils after a heavy rain.

“Our water absorption rate is much higher than it is in the no-till fields,” he says. “We had one day in spring where we got about 2½ inches of rain. One field we fall strip-tilled and freshened in the spring, there was never even a trickle that came off the hills. It absorbed all of it. We’ve had some serious stretches of rain water running out of our no-till fields.” 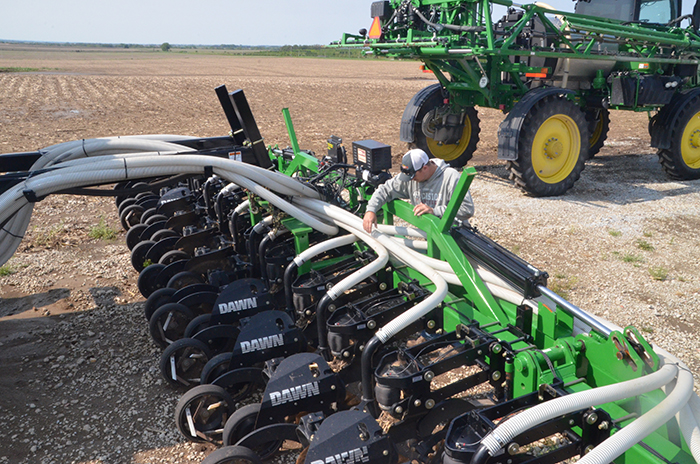 FIELD FLEXIBILITY. Karloff has run 3 different strip-till rigs and likes the flexibility of building strips and applying fertilizer in spring and fall. His plan is to use his 16-row Dawn Pluribus unit in the spring as a refreshing pass on his strip-tilled corn fields and then in the fall as a primary pass in soybean stubble.

By creating a 6-inch-wide and about 8-inch-deep strip, Karloff says he’s been able to create a better pathway for rain to seep into his soils, rather than run off of them. With 80% of his farm under center pivot irrigation, he says it’s nice to bank any moisture he can for the growing season.

“I’m seeing a lot better capacity to hold water in a strip-tilled field. That’s the name of the game here in Nebraska, where I need to be able to hold as much water as I can,” Karloff says. “Usually, I’d have to go out and do that with a ripper to get that compaction layer out. Creating a strip that’s 7-8 inches deep with a shank, it freezes out that much faster. It gets down there and it fractures and lifts that compaction layer a little bit, which helps water work its way down and also lets those soils warm up faster in spring.”

Strip-tilling in both spring and fall, Karloff has seen a dramatic improvement in spring soil temperatures, which helps early emergence.

“We were recently in a corn-on-corn field and in between the strips, 4 inches deep, it was 51 F. In the strip, it was 63 F,” Karloff explains. “This was at about 1:30 in the afternoon. It was a warm time of day, but still, there was a 12-degree differential between the two areas, which is huge.”

Although only 2 years in, Karloff is seeing preliminary yield benefits in part based on more consistent emergence, improved water infiltration and retention. One irrigated field of strip-tilled corn after soybeans yielded 265 bushels per acre in 2015, well ahead of the 235-240 yield goal Karloff typically sets.

“The emergence was just perfect and everything came up,” Karloff says. “Planting into it was very, very consistent and we didn’t even apply any fertilizer because it was just a trial.”

For years, Karloff no-tilled soybeans in 15-inch rows, but switched to 30-inch rows this year. His rationale: the wider spacing will allow him to get more use out of his John Deere 12-row 1770 planter on terraced fields, while also accelerating emergence.

“The biggest thing I’ll be anxious to see is if we can get them canopied quicker,” he says. “I know that’s the case in 15-inch rows and it’s easier to manage weeds. I’m hoping that if we can get a little faster growth, a little quicker emergence, we’ll see those same benefits.” 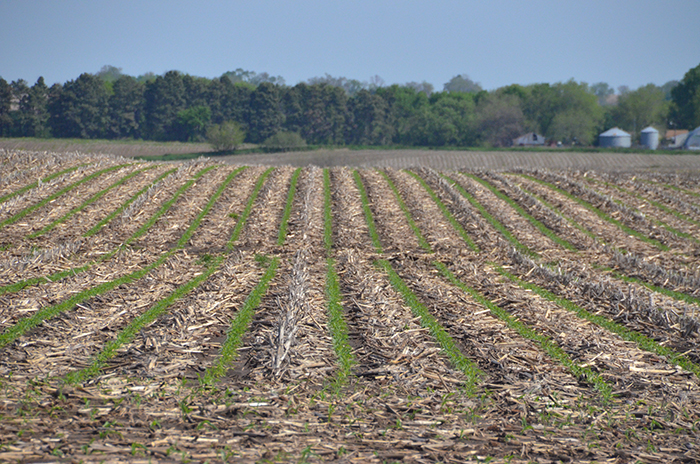 ROLLING RELIABILITY. With rolling hills on his 3,200-acre operation, Karloff says strip-till has allowed him to minimize erosion and retain more water after heavy spring rains that have soaked his area in recent years.

While Karloff has seen positive early results with strip-till, he is still figuring out which type of rig best suits his operation. So far, he’s run three different units, starting out with a pull-type 12-row Gladiator rig from Kuhn Krause.

Strip-tilling in the fall his first year, Karloff says he struggled with drift and keeping the unit on contours, despite using implement guidance. The following spring, he ran a 16-row Dawn Pluribus unit with a mounted Montag dry fertilizer tank.

Karloff says he plans to continue running the Dawn unit in the spring as a refreshing pass on strip-tilled corn fields and then in the fall as a primary pass in soybean stubble.

“My plan is to strip some of this hillier ground in the fall and I haven’t seen any issues with erosion problems or strips washing out,” he says. “Where I seem to get the best seedbed is when I get that fall strip built, it freezes and I freshen it in spring. It’s kind of complicated, but I want to use that fall pass to fertilize the soybean ground. Then in the spring, I can focus on covering more corn acres.”

This past spring, Karloff applied 160 pounds per acre of urea, 50 pounds of sulfur, 30 pounds of potash and 140 pounds of monammonium phosphate (MAP), mixed into the strips with the Pluribus unit. He liked the application method of blending fertilizer into the strip vs. banding it because several farms have pH levels near 8 and phosphate can get tied up beneath the soil.

“We want to go in and add that phosphate where it’s needed,” Karloff says. “Last year, with the Gladiator we banded 10-34-0 and it cost me a lot of money, but I wanted to at least try it. We saw a little bit of a lag from when the corn came out of the ground and until it found that band. With fertilizer being incorporated into the soil, I’m hoping plants with get more of a jumpstart.”

As Karloff continues to refine his fertility program, he plans to add variable-rate application. While he already utilizes variable-rate planting, he wants to be more efficient with fertilizer placement.

“We’ve typically applied a straight rate and I think we can be more economical targeting the higher producing fields,” Karloff says. “I know we’re still pretty new to strip-till, but already we’ve seen the benefits of more consistent emergence by planting on a perfect seedbed in the strip.”

Making The Most Of A Simple Strip-Till System