More than 50% of benchmark respondents utilize cover crops, while the percent of strip-tillers planting twin rows has more than doubled.

As strip-tillers search for efficient, economical ways to retain moisture and nutrients in their soils, an increasing number are turning to cover crops. Analysis of the 3rd Annual Strip-Till Operational Benchmark Study revealed another uptick in their use.

While these figures don’t yet compare to the 72.7% of no-tillers who planted cover crops in 2015, according to No-Till Farmer’s 8th Annual No-Till Operational Benchmark Study, it will be worth watching whether use among strip-tillers continues to increase.

For the second year, farmers were asked to identify which types of cover crops they’re seeding into strip-tilled fields. Once again, cereal rye was the most popular species, with 64.5% seeding this cover, up more than 4 percentage points from 2014.

Second most popular by a wide margin were radishes at 50.2%. However, this number was down by about 10 percentage points year-over-year. Also seeing a substantial decline was ryegrass, from 46.6% according to last year’s study, to 36.5% in 2015.

The biggest gain came in the percentage of strip-tillers using rapeseed, which jumped from 9.7% to 21.8%. Also seeing sizeable increases were buckwheat from 1.9% to 8.5% and barley from 1% to 6.2%.

New additions to the list this year were turnips, used by 20.4% of survey respondents, and lentils, which were grown by 2.8%.

While strip-tillers were able to maintain the same per-bushel average for corn yields, they did so by decreasing their average seeding population, albeit slightly. After 2 years of identical rates of 33,194 seeds per acre, the average fell to 32,970 in 2015 — a decrease of 224 seeds per acre.

While not a significant decrease, it was still above the 31,424 seeds-per- acre average for no-tillers as reported in No-Till Farmer’s benchmark study.

Perhaps the most interesting change in seeding practices was the continued adoption of twin-row strip-till. The percentage of strip-tillers utilizing the system has more than doubled during the last 3 years, starting at 2.9% in 2013, to 4.7% the following year and 6.3% in 2015.

This was more than three times the 1.9% of no-tillers planting twin-rows, down from 3.5% in 2014, according to No-Till Farmer’s benchmark study

Examining the top-yielding strip-tillers’ seeding practices, 68.8% utilized cover crops, about 15% higher than the overall group, with the most popular varieties being cereal rye (72.7%), oats (45.5%) and annual ryegrass (36.4%).

The top 10% averaged a corn planting population of 34,750, about 1,700 more seeds per acre than the overall group. Average seeding rates for strip-tilled soybeans were 142,902, slightly less than the overall average of 143,191.

As was the case with the overall group, more high-producers practiced twin-row strip-tilling. Last year, 15.6% utilized twin-rows vs. less than 1% in 2014. 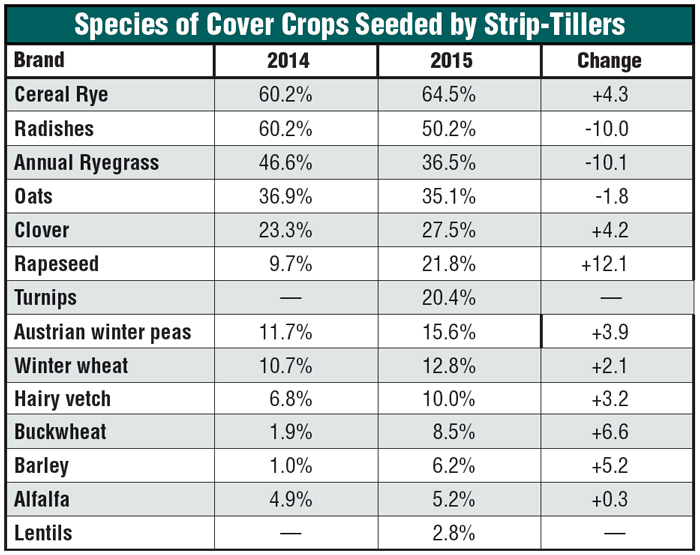