Cover crops started as somewhat of an enigma in strip-till, with farmers researching and testing the best mixes and seeding methods to achieve desired results. But the last few years have seen an explosion in the adoption and application of cover cropping in strip-till, as well as other conservation tillage systems.

In just 4 years of tracking use of cover crops in strip-till systems, the practice has grown more than 17% to a high of 61.2% in 2016 as revealed through analysis of the 4th Annual Strip-Till Operational Benchmark Study.

Strip-tillers’ incorporation of cover crops is trending on the same plane as no-tillers’ as reported by No-Till Farmer’s recent 9th Annual No-Till Operational Benchmark Study. Some 77% of respondents to the no-till study said they utilized cover crops, an all-time high, and an increase for the fourth straight year.

Dig deeper into equipment setup, strip-building preferences, fertilizing practices and precision farming usage in extended online analysis from the 4th Annual Strip-Till Operational Benchmark Study. Learn about which strip-till rig and GPS correction signal brands are most popular, as well as when and what types of nitrogen, phosphorus and potassium strip-tillers are applying in their operation.

For the first time, the benchmark study asked strip-tillers to identify their preferred method for seeding cover crops. Far and away the most popular option was drilling them in, with 45.5% of respondents preferring this method.

A handful of respondents noted they seeded cover crops with their strip-till rig, while other methods included broadcasting them and incorporating them with a vertical tillage unit, and, perhaps most interestingly, helicopter application.

Looking at corn seeding populations preferred by strip-tillers, the average increased slightly last year to 33,219 seeds per acre, compared to 32,970 in 2015. This increase brought the average back in line with the 2013 and 2014 averages of 33,194. The modest year-over-year increase widened the gap between average corn seeding populations for strip-tillers and no-tillers of 31,403 seeds per acre, as reported in No-Till Farmer’s recent benchmark study. 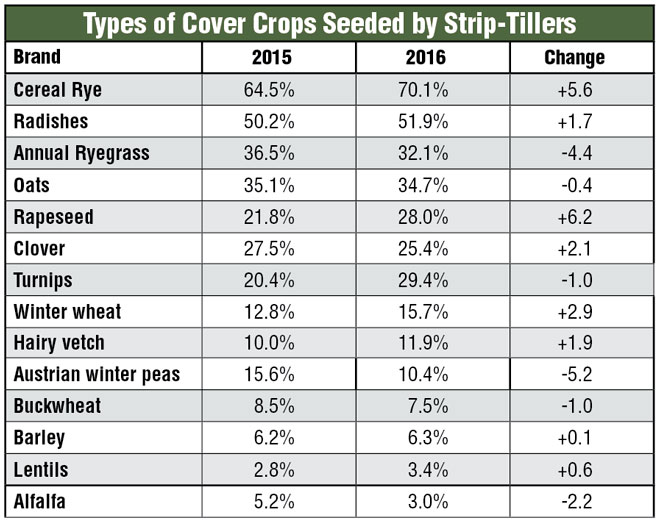 Cover crops were part of 70% of the top strip-tillers’ operations in 2016, about 9 points ahead of the overall group and 2 points higher than 2015. Some 60% drilled in their cover crops, about 15% more than the overall group.

WELL COVERED. In just 4 years of tracking use of cover crops in strip-till systems, the practice has grown more than 17 points, to a high of 61.2% in 2016.

[Podcast] A Sensible Approach to Cover Cropping in Strip-Till