Strip-tillers often cite targeted fertilizer placement as a key benefit of the practice, to ensure that plant roots can access nutrients throughout the growing season. But the 3rd Annual Strip-Till Operational Benchmark Study revealed some interesting changes in what type of fertilizer strip-tillers are applying and how.

Also seeing an increase, albeit a minor one, was the percentage of farmers who apply fertilizer between the berms with their strip-till rig, from 4% in 2014 to 5.3% last year.

Feeding the crop on a consistent basis throughout the growing season often requires multiple fertilizer applications, and strip-tillers tend to efficiently time their nitrogen (N) based on need.

But last year, fall N placement in the strips was the only method that saw a year-over-year increase among strip-till survey respondents, from 35.1% in 2014 to 37.4% last year.

There were also smaller declines in the number of strip-tillers making foliar N applications, from 11% in 2014 to 8.7% last year, and fertigation of N, from 12.6% to 9.8%. These came a year after near across-the-board increases of strip-till N applications from 2013-14.

As for the types of N that farmers are applying with their strip-till rigs, anhydrous ammonia was again the most popular, with 30.6% using this source. However, this represented a nearly 9 point drop off from 2014.

Increasing governmental regulatory pressures in many areas may have contributed to the decline, but it will be interesting to see if the trend continues in coming years, given that anhydrous is still an economical source of N.

Once again the majority of strip-tillers prefer to make their phosphorus (P) and potassium (K) applications with their strip-till rig than at any other time of the season. More than 97% of survey respondents apply P and K either in fall strips (59.7%) or in spring strips (37.7%). These applications were up from 55.3% and 34.8% in 2014, respectively. 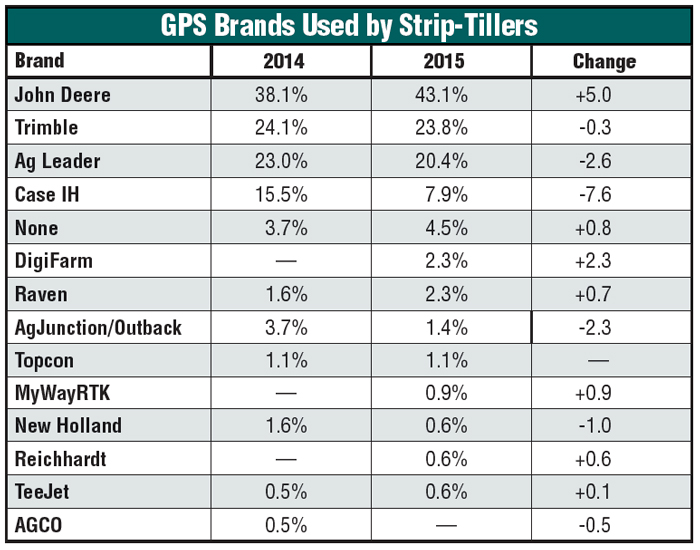 Although there is still some debate over the consistent benefits of variable-rate fertilizer application, it’s a practice that strip-tillers continue to embrace.

View from the Top

Banding fertilizer beneath the berm has remained the most common method among the top-yielding strip-tillers, with 80% preferring this method, nearly identical to the 79.3% in 2014. 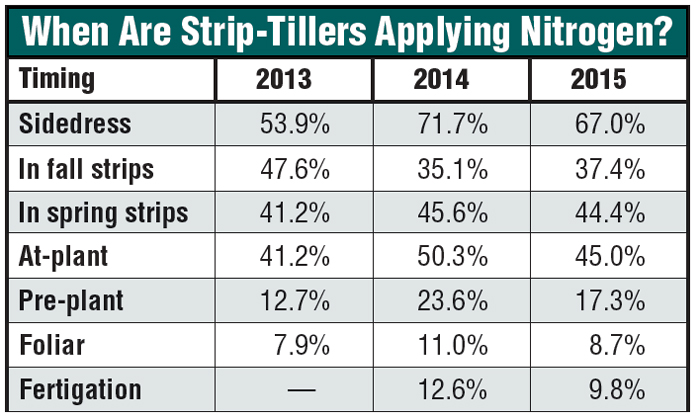 Consistent with the overall group, John Deere was the most commonly used brand of GPS, with 61.3% of the top strip-tillers using the system. Implement guidance use was up slightly among the top strip-tillers, with 21.9% utilizing the technology, compared to 17% in 2014.

2015 Strip-Till Operational Benchmark Study: Sidedressing Nitrogen, Use of Variable-Rate Fertilization on the Rise

Flipping the Fertilizer Script With Variable-Rate

Limiting the Variability of Variable-Rate Application