Shifting Preferences for Brand, Size and Setup of Strip-Till Rigs

By Jack Zemlicka posted on August 5, 2016 | Posted in Equipment

As many strip-tillers can attest, finding the right mix of equipment to maximize performance and productivity in the field is an evolving process. It may takes years or even decades of experimentation with different toolbars, row units and attachments to find the right combination.

This notion is reinforced by responses to the equipment usage portion of the 3rd annual Strip-Till Benchmark Operational Study, which revealed a variety of brands, row unit setups and sizes of unit used by farmers.

The type of row unit setup strip-tillers find most effective can depend on field conditions and when they prefer to prepare their seedbed. Fall strip-till proved to be the most popular timing for the third year in a row, with 42.3% of farmers getting back into the field after harvest. While this represented an increase over 2014’s total of 37.3%, it’s on par with the 42% reported for 2013. 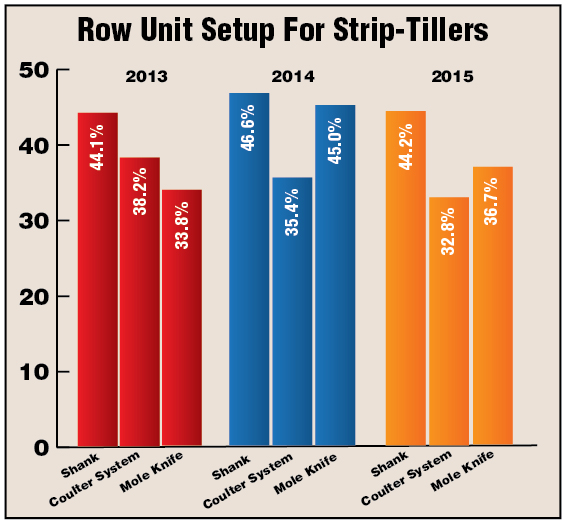 An increasing percentage of farmers are strip-tilling in fall and spring, perhaps for a refreshing pass or having adaptable equipment setups to accommodate either season. Some 35.6% respondents to this year’s benchmark study are fall and spring strip-tillers, up from last year’s 33.4% and the 29% reported in 2014.

With strip-till acreage on the rise, it makes sense that farmers are increasing the size of their equipment to cover more ground in a shorter amount of time. While 44.4% of farmers utilized a 12-row strip-till rig on their operation in 2015 — by far the most popular size — 37.5% used 16- or 24-row machines, an increase over prior years. 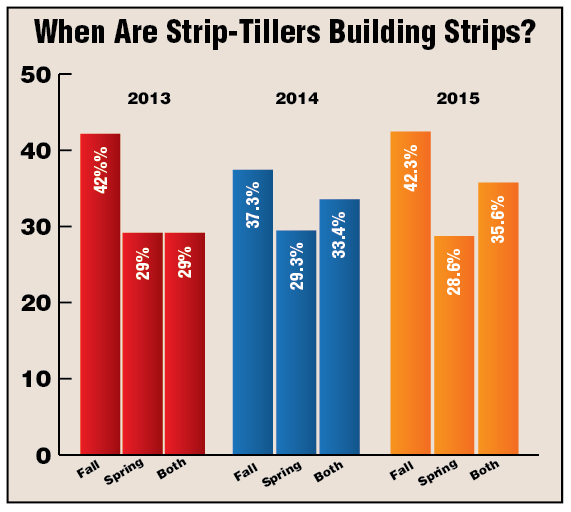 It’s common to see farmers tinker, tweak and even take apart strip-till rigs in an effort to improve performance or adaptability to their field conditions. With no shortage of field-ready machines on the market, strip-tillers have a variety of options to choose from — at least for a starting point.

For the second year in a row Kuhn Krause was the most commonly used strip-till rig, with 20.7% of respondents using the manufacturer’s machine, despite about a 2% year-over-year dip. 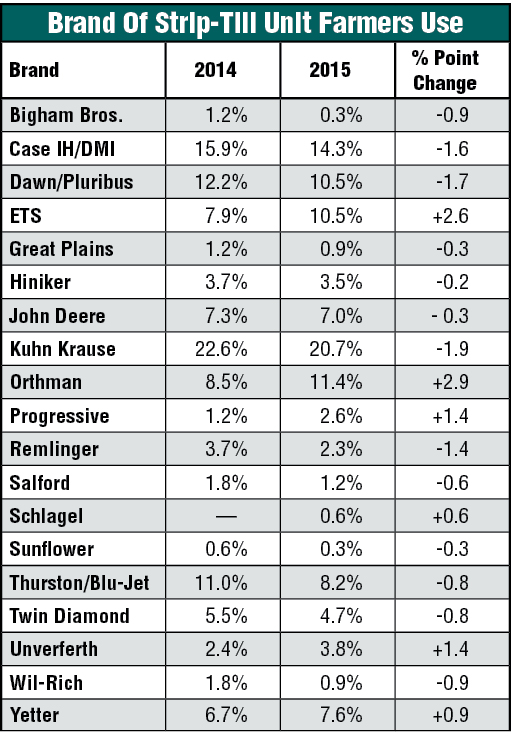 Looking at brand usage, only 36.8% of strip-till manufacturers saw year-over-year growth, compared to 57.9% in last year’s study. Given the ag market, it’s possible that strip-tillers were more conservative with purchasing new toolbars, row units or attachments in 2015 and it will be interesting to see if the trend continues this year.

So how do the equipment setups of the highest-yielding strip-tillers compare to the overall group? The majority of the top 10% utilized a shank setup on their row units, with 59.4% preferring this system, followed by mole knives (32.3%) and then a coulter system (25%).

This deviated from last year’s results, where 34.1% preferred a mole knife, 27.3% used a shank-style setup, and less than 1% used only a coulter system on their row units, or a combination of coulters and shanks.

As for which brand of rig the highest yielding strip-tillers preferred, 25% ran Orthman units, up about 10% from last year. Last year’s top brand, Kuhn Krause was second with 21.9%, down from 22.7% and Thurston/Blu-Jet was third with 12.5%.