What Farmers Want From You

Being on the Bleeding Edge Can Cut Into Precision Productivity 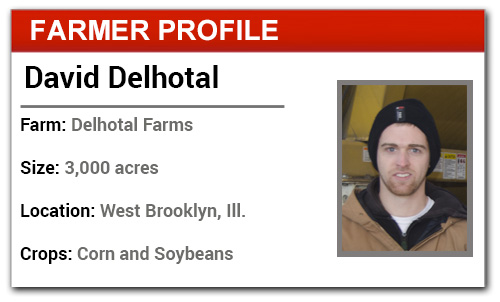 When David Delhotal started using precision farming equipment in 2007, he was sold enough on the capabilities and benefits, that 2 years later, technology touches most aspects of his family’s 3,000-acre operation in West Brooklyn, Ill.

He and his father, Ray, strip-till corn and no-till soybeans and do 2,500 acres of custom application work. Starting with a Trimble FMX monitor and single radio base station RTK signal for tractor auto-steering, the Delhotals went full bore into precision farming in 2009, using the FMX monitor in conjunction with radio-based RTK signal for even greater accuracy.

“With the topography here, we would sometimes lose the base station signal,” Delhotal says. “In 2012 we switched to cellular RTK because the signal is much more precise and reliable.”

They strip-till more than two-thirds of their corn, starting with a fall pass with a 12 row Environmental Tillage Systems’ Soil Warrior with an XD deep-tillage attachment. They use a mounted, 8 ton fertilizer cart that can variable-rate phosphorous (P) and potassium (K) based on rates that Delhotal prescribes through a program he has developed.

“Depending on the weather, we may make the strip-tillage pass in the spring, changing the unit over to a 16 row rig with XS spring units that have offset wavy coulters that work the soil and settle the dry fertilizer into the seed zone,” he says. “We will add 70 units per acre of urea as a straight rate in the spring.”

They use a Trimble TrueTracker implement guidance steerable hitch on the strip- till rig. “With that and the cellular RTK signal, we can accurately space guess rows,” Delhotal says. “That’s especially important with custom work because equipment widths may not match our own.”

For planting, they used a Kinze 3700 planter with hydraulic drives. But in 2017, they are going to a John Deere 1770 NT planter outfitted with Soucy rubber tracks to minimize compaction from the heavy central seed hopper. With four sets of tracks, Delhotal says the weight will be distributed more evenly.

They get even greater steering control with a Laforge guided hitch between the planter and their Deere 8235R tractor. Seeding rate is controlled by the Trimble FMX monitor.

“It was hard to figure out the calibration of the electric drives, but our dealer was helpful and now it works great,” Delhotal says. They can load precisely enough seed for the field and almost always the correct amount to finish the field.”

Delhotal was one of the first farmers in the area to install a Trimble TrueTracker hitch system, and he and his dealer struggled to get it calibrated correctly. The early frustration caused some anxiety about capitalizing on favorable field conditions.

“It was stressful when we were getting the system to work, when the weather was perfect and we weren’t getting anything accomplished,” he says. “When I look back at what we struggled with, it doesn’t seem like such a big deal now, but it certainly was when we were going through them.”

Delhotal’s precision dealer dealer ultimately was helpful in getting the A-B lines set up correctly so they can control traffic in the fields. “Because we have the system calibrated so well now, we can run the strip-till rig up to 13 miles per hour and spray at up to 18 miles per hour on flat ground,” he says.

Delhotal uses Farmworks to manage yield data and create variable-rate maps. He says the software was difficult to learn at first, but he’s had success laying yield data over fertility and other data to reveal areas that aren’t performing as well.

“We can pinpoint problems and opportunities for improvement,” he says.