By Ian Gronau posted on January 25, 2023 | Posted in Nutrient Management

GROWING NITROGEN. Iowa strip-tiller Keith Schlapkohl noted that he saw a boost to his planter-applied nitrogen (N) by applying Azotobacter, a N-fixing bacteria. A late spring nitrate test showed that he’d gone from 30-80 units of available N in the top 2 feet of his soil to 180-330 pounds of N available, even though he only applied 80 units of N with his corn planter.

When it comes to a strip-tiller’s bottom line, the profit often comes in the form of cost savings rather than increased yield.

However, there are a few exceptions ─ especially when the farmer makes a concerted effort to maximize yields through a combination of various techniques.

That’s the case with Keith Schlapkohl, a strip-tiller in Stockton, Iowa, who has made incremental improvements to his system that are inching most of his corn yields toward the 300-bushel mark.
He explains it’s not just one piece of equipment, strategy or input in his arsenal that is edging up his yields, but rather a mix of methods.

“It’s not cherry-picking an idea from one spot and saying that’s the magic bullet,” Schlapkohl says. “There are no magic bullets.”

Strip-tilling since around 2010, Schlapkohl has nearly 1,000 acres of strip-tilled corn-on-corn. While he acknowledges his system is still a work in progress, he shares four unique strategies he’s putting into practice that are contributing to the corresponding yield bump.

Schlapkohl puts his water through a two-step process to help stretch his inputs. First he runs it through a Reverse Osmosis system, which removes minerals to make it 99% pure. Then he structures or energizes the water.

Referencing research by The Hidden Messages in Water author Masaru Emoto on the molecular structure of water, he points out that ordinary water appears blob shaped under an electron microscope. But Reverse Osmosis water that’s been structured appears as a snowflake, making it a more suitable medium to deliver nutrients, pesticides and other inputs.

“Water that looks like a snowflake penetrates the plant a lot better and it carries more material,” he says. “If you try and put sugar into water, simply by using structured Reverse Osmosis water, you can go from 6 pounds of sugar to 8 pounds of sugar per gallon of water. There’s so much holding capacity of that water when you do something with it other than just pump it out of the ground and use it.”

By stretching inputs, Schlapkohl says he can use less, which allows him to save money and allocate it toward other yield-boosting strategies.
“If you can cut your herbicide bill in half, what does that save you?” he says. “How much more money can you spend on fertility to feed that plant?”

SNOWFLAKE MOLECULES.  By using reverse osmosis water in all his sprays and foliar applications, Schlapkohl says that he’s able to stretch all of his inputs further than they’d go normally, thus saving money. While ordinary water appears “blob” shaped under an electron microscope, reverse osmosis water appears as a snowflake, making it a more suitable medium to deliver nutrients, pesticides and other inputs, he says.

Schlapkohl believes that pesticides and herbicides don’t stop after just killing off the “bad stuff.” Beneficial biology, bugs and plant life are killed, too.

Because of this potential negative side effect, he does his best to keep his rates as low as possible. Using RO water allows him to lower the rates while maintaining potency, even increasing it, he says.

“Four ounces of insecticide is all I use for rootworm beetle control, which is way below labeled rates,” Schlapkohl says. “For herbicides, my complete corn program for weed control is two quarts of Lexar and half a pound of Atrazine. By doing something different with water, I’m able to reduce my herbicide, insecticide rates.”

“Glyphosate has a patent as an antibiotic,” he says. “Why are we putting an antibiotic on our fields and killing soil life? It kills the beneficial microbes while letting the bad boys, the Fusariums and pythiums, explode.”

Schlapkohl has been on a quest to reduce nitrogen (N) application for 20 years.

“I learned that over-application of nitrogen is just as detrimental as under- application a while ago,” he says. “I have a 77-acre creek bottom field with point rows. One year, a corner down in the back of the field where snow drifts got deep, about one-third of an acre didn’t get covered with manure. Guess what third of an acre was standing that next summer after a windstorm?”

Over-application of N also promotes disease and stalk rot, he says. “We need to be properly timing and placing N, whether it be a nitrate form to vegetatively grow the plant and roots, or an ammonia form to promote reproduction,” Schlapkohl says.

When a recent stalk nitrate test showed Schlapkohl was applying too much N, he decided to half his 21-1-0 foliar application from 2 gallons to 1 gallon. He says his SPAD meter, which measures chlorophyll, tell him he has as good or better readings than he had been getting the previous 3 years.

He credits this in part to the use of two N-fixing bacteria: one that is applied in-furrow during planting, as well as the bacteria Azotobacter, which is applied to the plant. Although applying the Azotobacter costs him an extra trip across the field ─ spreading it with N will kill it — he’s seen results to convince him that it’s well worth the investment.

The application, which lasts about 3-4 weeks, can produce up to 60-100 pounds of N in the right growing conditions, he says. In an experiment that pits his normal rate of foliar N against Azotobacter, the SPAD meter showed better returns on the latter.

“At this point, I’m a full 10 points higher on the same variety using the Azotobacter vs. foliar feeding the plant the way I have the last 4 years,” Schlapkohl says. “I’m growing my own N instead of buying it, it’s more cost effective.”

Late spring nitrate testing also has convinced him that applying the two N-fixing bacteria are having a profound affect.

“I pull late spring nitrate tests across all of my corn fields and in the last 10 years I went from seeing N levels of 30-80 units available in the top 2 feet of soil to now seeing 180-330 pounds of N available,” he says. “That’s only with 80 units of N put on with the corn planter.

“In 2013, my best late spring nitrate test was 330 pounds of N. Is inoculating my soil with N-fixing bacteria working? I think it is. How else can I have those levels of N in the soil without applying them?” 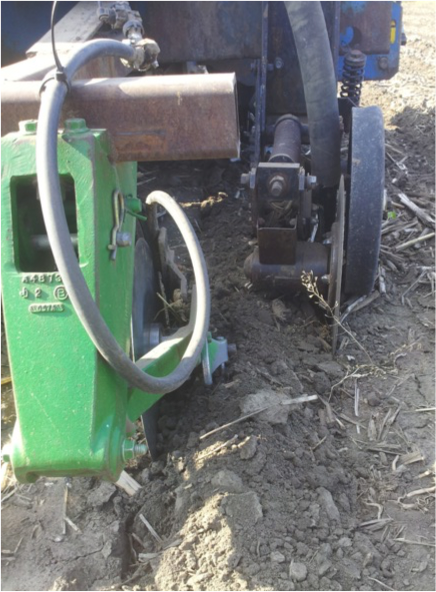 BOOSTED RETENTION. By applying a 1,000-pound mix of gypsum and lime, Schlapkohl says he’s seen at least a 50-100% boost in water retention and his water infiltration rate is 3-5 times greater than before. The program works so well for him, he’s been using it for well over a decade.

“If you don’t have oxygen in the soil and you’re not managing that water table, you can’t grow a good crop,” says Schlapkohl.

For this purpose, he uses a combination of gypsum and lime. After reading a study about how lime and gypsum were beneficial to soils independent from one another, he decided to combine them.

“It’s one of these one-plus-one things. If you throw the two of them together, it’s like throwing gasoline on a fire vs. diesel fuel ─ you get a bigger reaction, bigger response,” he says. “This stuff gets hard when it gets wet. It works great in the feed lot to put on cattle mounds. A college roommate told me I may want to try spreading it on the farm because it has sulfur and calcium in it too.”

He explains that gypsum increases water infiltration 3-5 times the rate of soils that don’t receive gypsum, resulting in a water-holding capacity that’s 50-100% greater. This really paid off in the drought of 2012, as he was able to beat the county average by 100 bushels.

“Unfortunately it’s a benefit that you need to wait for a drought to figure out that it’s actually there,” Schlapkohl says. “But I’ve seen it twice in the last 15 years that we’ve beat the county average by 100 bushels on a drought year.”

He adds that the faster infiltration also helps to prevent runoff.

“When you see the water running off your neighbor’s field, it’ll all be soaking in on yours, and because you can store it, that becomes your ace in the hole,” he says.

This also means that wet spots don’t appear in his fields as quickly as they use to, which means during a wet year he can get in his fields faster. He started by applying 500 pounds per acre of a gypsum and lime mix, but quickly moved that up to 1,000 pounds, on account of seeing early gains in soil structure and reduced compaction.

“I’ve got 18 years of doing it continuously now,” Schlapkohl says. “First 14 years, we brought it up to a ton per acre, but then the pHs of my soils were starting to rise over 7, so we cut back to 1,000 pounds. I still haven’t figured out how much is too much, it keeps getting better and better.”