For Canadian strip-tiller Mike Verdonck, weed pressure, erosion and a reliance on heavy herbicide and fertilizer applications are all symptoms of “sick” soil.

The antidote? Reducing tillage, moving to a year-round, multi-species cover cropping system and putting a focus on rebuilding and maintaining soil health.

Verdonck farms 2,500 acres of mostly corn and soybeans near Montreal, Quebec. Farming heavy clay soils, his latitude exposes him to difficult climate challenges, compounded by more than a decade of conventional tillage practices.

“Believe it or not, we’re still able to grow corn that far north — maybe in the 95-day variety or 100 if we push it,” Verdonck says. “We probably have a bit of a microclimate though because of the St. Lawrence River.” 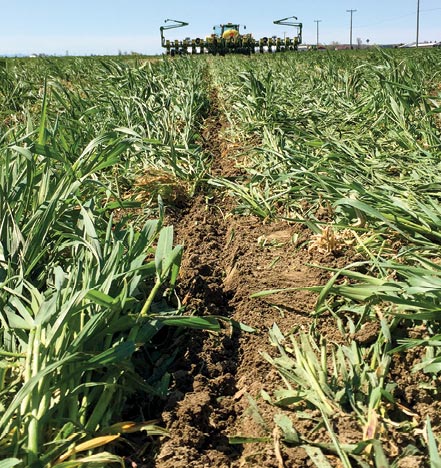 BIO-HERBICIDE. After trying no-till first, Verdonck ran into onerous weed pressure. His current system of year-round cover cropping and strip-tilling has allowed him to dial back the herbicide rates as a natural mat of cover crops often choke out early season weed growth.

It wasn’t exactly love at first sight with strip-till either when he first tried it several years later. Building his own rig in 2012, Verdonck says it took him some time to settle on ideal depth — initially starting at 18 inches — and toolbar set-up, as he was seeing smearing with shanks. But, he saw enough potential.

In 2014, Verdonck invested in a 16-row coulter-style Soil Warrior from Environmental Tillage Systems. He says the rig’s discs on a light setting allow for the aeration he wants to see in the seed trench without smearing, ripping or overly disturbing the soil.

But even with the equipment in place, Verdonck still needed to solve weed pressures that made him dependent on heavy herbicide applications. To combat this, he wanted a biological solution.

“So if you want to keep tilling you’ll have to buy all the fertilizers, micronutrients and other inputs every year to get results. You can have most of that for free if you start building your biodiversity through cover crops. Tillage just oxidizes carbon, increases water evaporation and reduces organic matter.”

In this FREE, 14-page eGuide edition of “Innovative Opportunities to Increase Soil Biology in Strip-Till,” be immersed in expert soil biology boosting tips, tricks and techniques designed to push your strip-till farm to the next level! Download now »

A recent convert to year-round cover cropping, the argument that sold him was the idea that weed pressure is part of a “soil’s defense system to rehabilitate itself.”

“If you think about it, weeds are activated by the soil,” Verdonck says. “The soil needs plant growth for its bacteria. When there’s no plants, the soil is going to send a message through its system and it’s going to fill up with weeds. Nature doesn’t like emptiness. You need to always have something living, or at least a mat, on your soil.”

He admits, returning his soil to a more healthy and productive state has been an expensive, labor intensive and ongoing process. However, after the investment produced little to no yield drag, Verdonck is convinced that the process is worth it.

“Soils will always feed themselves first,” says Verdonck. “So microorganisms, if you give them the chance, will use 90% of their energy to rebuild their habitat with only 10% going to the crop itself. The farther away you are from healthy soil, the longer the roots are going to be and the tougher they’re going to be. We’ve had to be patient and work through the transition to healthier soils, it’s probably going to take us at least another 5 years.”

Verdonck has steered away from broadcasting cover crops. “Sometimes broadcasting applications seem to work, but in our area it can be tricky — we’re using expensive seed and we want them to take hold,” he says. “This can depend on timing and weather, but we usually prefer to drill the seed in.”

Depending on how late in the fall he harvests and subsequently seeds his cover, Verdonck uses predominantly cereal rye. If he can get into the fields earlier, he’ll use a mix.

“I limit the mixes as fall advances,” he says. “Sometimes because we’re up north, after the soybeans, cereal rye is the only thing that’s really going to give an edge. Otherwise we’ll put some radishes, oats and crimson clover too.”

He’s also begun experimenting with alfalfa and black oats for their ability to last further into the colder months. Verdonck says black oats have shown that they act as a fungicide and are a hardier cold climate crop, but the drawback is their cost. Trials with alfalfa have been promising as well, but he’s on the lookout for soybean cyst nematodes.

“Alfalfa has a deep root system and it works hard — it’s very tough at the bottom,” he says. “But then again, the soil structure on top is not great. So we’re starting to mix it with birdsfoot trefoil. I’ve been told that the long-term effects of using too much alfalfa can support soybean cyst nematodes so that’s another reason to mix it. The mix has proven to be a great nitrogen (N) source and offer excellent weed control because I have constant cover.”

Verdonck says by planting his soybeans in narrower 7.5-inch rows he’s been able to help biologically choke out the alfalfa in the spring.

“I go easy on the glyphosate so I don’t kill the alfalfa completely,” he says. “With narrow soybean rows, they grow over the alfalfa fairly quickly and shade it. Alfalfa doesn’t like the shade so it’ll stay dormant on the bottom.”

For Verdonck, rehabilitating his soil is helping to maintain profitability despite his climate conditions. He notes that soil regeneration is critical to not necessarily increasing yields, but increasing revenue.

“Some farmers brag about yield, but I prefer the economical facts,” he says. “To be competitive in our business we have to know our cost of operation and cost of production. The advantage of strip-tilling is efficiency — lower costs of production while maintaining good yields.”

Where the practice really shines is when it’s faced with seasonal volatility. He says the 2016 growing season was disconcertingly dry in his area, and the 2017 growing season was deluged with water. He believes that the combination of strip-tilling and cover cropping protected him equally in both scenarios.

In 2016, his corn crop seemed to be suffering due to early dryness. But after digging along the corn, he saw that the root systems looked good — chasing down the existing cereal rye root masses. By July, conditions were still dry and the corn looked dismal. But in August, the corn came roaring back, he says.

“I’ve been told that in a dry season with cover crops you can get off to a slow start, but by August, they return all their fertility and moisture,” Verdonck says. “By August, there was no discoloration and the corn looked great. Since it was such a dry year, there ended up being a yield drag, but it was only something like a 5-bushel difference which was not bad at all considering the weather.”

In 2017, conditions flipped, and his fields were drenched and cold most of the growing season. “There was a day where we got 2 inches of rain in 20 minutes,” says Verdonck.

Again though, he says he was protected. In this instance his cereal rye, oats and crimson clover mix helped with infiltration.

“My neighbor had plowed and planted corn-on-corn and there was just no infiltration for him — he had severe ponding and his fields didn’t dry out all season,” he says. “His plow pan didn’t let any water down deeper into the soil.”

The difference between his and his neighbors fields — with only 5 years of strip-tillage and two of continuous cover cropping behind him — was night and day, he says.