Strip-Till Viable on Both Ends of Cross-Country Farm Move

Texas corn producers move their farm 1,300 miles east and pick up where they left off when their High Plains strip-till operation was displaced by a growing dairy. The sand’s the same in South Carolina.

Pictured Above: PROPERLY EQUIPPED. Brandon Woody says his John Deere 2510S high-residue strip-till rig is the key to holding soil in place, whether it be on the Texas High Plains or in the Deep South. Woody and his brother, Colt, transplanted themselves from the Texas Panhandle to South Carolina 4 years ago, and continue their penchant for high-yielding continuous corn on sugar sand fields.

It’s rare when a farm gets bought out that the owner moves half way across the country just to start again. That’s what brothers Brandon and Colt Woody did, after some serious, careful planning.

The Woodys left the light, sandy ground of the High Plains northwest of Amarillo, Texas, 4 years ago when their 4,800-acre continuous-corn operation was absorbed by one of Texas’s many sprawling dairies. They landed 1,300 miles east near Aiken, S.C., with a well-thought-out business plan to grow corn again — and again, their fields would be primarily sand.

“Over the past 11 years, we’d learned how to farm on light soils by strip-tilling to prevent wind erosion,” explains Brandon. “So when we moved to South Carolina, the strip-tiller remained a key to our management because erosion is a problem here too, only it’s water erosion we deal with now..”

“We researched a number of areas for a new home,” Brandon says, explaining the area around Aiken is populated with poultry and swine feeding operations, but historically has been deficient in corn production.

“We found the corn basis is consistently higher ($0.70-$1.20) in this area than most. So, it told us supply is consistently short here,” he says. “If, what we are told is true about carbon and freight, we decided help alleviate a portion of the carbon footprint of getting corn from out of state for the chicken houses.

“Plus, we were accustomed to sandy ground and were able to find enough land to accommodate our operation in a relatively close proximity.”

The one catch to the plan, however, was about 3,000 acres of that sandy soil was supporting a 65-year-old stand of pine trees.

“When we arrived, there was no land available,” Brandon says. “There was quite a local uproar when we bought timberland and cleared it for row crops — particularly since farming isn’t a primary activity here.

“Our location is a good one, however, because we cooperate rotating acres with a neighboring potato farm. They have to plant on new soil to combat soil pathogens, so after their harvest they plant sorghum-sudangrass as a cover crop and terminate it when it’s about 6 feet tall. We come in and plant in that stubble the following spring.”

Like the Texas operation, Woody Farms, owned by the brothers and their parents Mr. and Mrs. Truman Woody, is irrigated. Twenty-three Valley center-pivot rigs fed by a deep aquifer untouched by local residential and industrial wells provide timely water to continuous corn.

While the Aiken area receives about 54 inches of precipitation a year, the Woodys don’t want their corn to have even one bad day, so the sprinkler radius?, ranging from 30-340 acres are on hand to provide a steady source of moisture.

“We try to just move the residue off the strip we’re building and bring up a little fresh dirt at the same time, running 6-7 miles per hour...” — Brandon Woody

“The fields are equipped with AquaSpy soil moisture probes which can give us moisture condition readings every 8 inches from the surface to 4 feet deep,” Brandon says. “We can watch where, when and how much water the plant is taking up, and through timely irrigation we can maintain a steady supply of moisture for maximum yields.”

All of the Woodys’ fields — some of which are 30 road-miles apart — sport electronic rain gauges and AgSense cellular remote irrigation control systems on the pivots, so watering can be stopped or started remotely. The technology allows sprinklers on fields receiving rain to be idled to save power and water.

Brandon says strip-till farming and implement guidance makes it all possible. “We have to maintain residue on the ground to prevent washing when we get heavy rains,” he explains. “What we learned in Texas to combat wind erosion works well here, too.”

When moving day came, the brothers hauled their John Deere 2510S Residue Master high-residue strip-till rig across the country, along with a 32-row Deere DB80 planter. Other trailers brought the JD8530 and 8360 tractors, along with a pair of Deere 4WD machines.

“When we moved to strip-till a dozen years ago, the first thing we noticed was we drastically cut the number of trips across the field,” Brandon recalls. “We were in continuous corn, just like here, but we retired a lot of equipment when we began farming in strips.

“We quit cultivating, we didn’t disc, we stopped running the chisel/chopper mulcher. By eliminating those field trips we made drastic cuts to our diesel fuel bill. The same goes for the new farm. We build strips in the spring, we make fertilizer applications, we plant, we spray if need be and we harvest.”

“The Residue Master is reserved strictly for building strips,” Brandon explains. “There’s no application equipment on it, and we’re running Deere’s original ground engaging row units with Deere residue managers on the front.

The machine is equipped with a bank of coulters set 15-inches apart on the front to cleanly cut residue, followed by a set of row cleaners in front of the chisel shanks. Behind the shanks, berm-building discs throw up soil and a trailing packing wheel settles the dirt.

“We try to just move the residue off the strip we’re building and bring up a little fresh dirt at the same time, running 6-7 miles per hour,” Brandon says.

At planting, the Trimble system is swapped to the planter for nearly sub-inch tracking for DeKalb, Cropland and Pioneer hybrids at a rate of about 33,000 seeds per acre. The planter also runs a set of residue managers to ensure a clean drop zone for the seed. 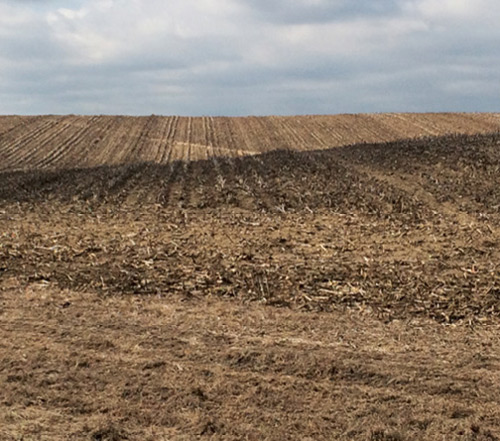 SIMILAR SOILS. Sand is sand and it moves when the wind blows or rains pour, especially when fields roll at up to 12% grades. By using what they learned strip-tilling in the Texas Panhandle, Brandon and Colt Woody are able to hold this soil in place and produce over 240 bushel of corn per acre on their new farm near Aiken, S.C.

“Despite the hills, I’ve seen the planter run just a couple of inches off the strip-till track, but only for 10-feet or less,” Brandon says. “Getting the system to perform that well took a lot of in-field tweaks, but once we got it locked in, it’s a dream to run.”

The entire farm is soil sampled each year on 2.5-acre grids. “We’re now building additional value into our grid maps with yield data, but we’ve only been here 3 years so we’re just starting,” Brandon says.

“From those results, we can correct for pH and will use a variable-rate applicator to lime where needed. Also we get nitrogen (N), phosphorus (P) and potassium (K) readings and micronutrient levels from those soil tests.”

Just before planting, the Woodys broadcast the prescribed P and micronutrients along with 50% of the K called for by the soil analysis. “We hedge on the K because we want the roots of the new crop to engage it as soon as possible,” Brandon says. “We don’t want to put the full amount on at planting because we could lose it in a heavy rain. We’ll topdress the remainder at the 4-collar stage to make sure it will be available when the plant goes into heavy growth.”

All of the crop’s N is applied through the sprinklers and a system of AgriInject pivot pumps. “We fertigate 30 units per acre of N at the 4-collar stage and then take weekly tissue samples up through the brown-silk stage to prescribe how much N we need to pump each week to keep the plants vigorous and growing toward our yield goals,” Brandon explains.

Because most of the corn Woody Farms produces is on the prior season’s potato ground, Brandon says they have one of the cheapest weed control systems in the industry.

“The potato growers fumigate their fields for disease control, so when we take to the fields, they’ve already controlled a lot of weed species,” he says. “So far, all we’re using is Atrazine and Roundup.”

Brandon says plant disease hasn’t been a problem on the new site, although he says drought-stressed dryland corn in the area has tested positive for aflatoxin.

Rain, Rain Go Away — or Stay?:
Adapting to Changing Climates

“The last few years of weather data lay on the fringes of what we’ve experienced in the last 120 years,” he says. “We see that across all the Midwest and we can expect this trend to continue.”

Although there is much debate about climate science, Hatfield says recent weather patterns have broken from past trends and will become even more unpredictable in the future. If weather follows the course it seems to be on, rain events will become more intense and more infrequent, he says.

“We need a tillage system that will handle the extremes in precipitation,” says Hatfield. “I can tell you that conventional tillage systems are not going to handle that because most of the erosion I see and runoff I see are coming out of those systems, because they slake very quickly and don’t have any protection.”

Hatfield points out that seasonal rainfall may mean much less to farmers if only a small portion of it infiltrates their soil. The aggregate soil structure created by strip-till is conducive to infiltration, he says.

“It’s not enough to say that I got 2 inches of rain,” Hatfield says. “If you got an inch of runoff from 2 inches of rain, you only got 1 inch in the soil. It also contributes to soil degradation. I see soil running off fields with less than an inch of rainfall. If we’re going to pick up rain events that dump 2, 4, 6 or 8 inches in a 24-hour period and the soil can only absorb 1 inch, everything else is gone and it’ll carry soil with it.”

Strip-Till & Cover Crops Offer the ‘Best of Both Worlds’