As attendees at the fifth annual National Strip-Tillage Conference began filtering in for the start of the event, a newcomer to the practice overheard a conversation between a couple of experienced strip-tillers who were chatting about nitrogen (N) application experiments.

He asked to join them, and candidly admitted, ‘You two know a lot more than me and I’d love to pick your brains.’ More than an hour later, the three farmers were still engaged in discussion, with several pages of visible notes in front of the new strip-tiller.

The scenario personified the collaborative, knowledge-sharing environment of the 2-day event which drew a crowd of 360 farmers, researchers and industry professionals to Iowa City, Iowa, July 26-27.

Kicking off the conference was Reinbeck, Iowa, strip-tiller Jack Boyer’s presentation on successful cover-cropping practices when paired with strip-till. Boyer implements covers across 100% of his corn, seed corn and soybean acres.

As for selecting varieties within a cover crop, Boyer recommends considering seeds-per-acre instead of pounds per-acre when pricing, as not all “pounds” of seed brick are created equal.

“For cereal rye, I took Variety Not Stated (VNS) vs. Elbon and counted out the seeds. The equivalent of 56 pounds of VNS was 35 pounds of Elbon. So going to seeds per acre has a tremendous benefit to cost of production,” explains Boyer. “I’ve got experience with 35 pounds of Elbon and gotten equal to or better cover crop coverage than VNS.”

Over the past 10 years, Boyer has participated in a series of cover crop trials with Practical Farmers of Iowa, Iowa State University and the Iowa Soybean Assn. One notable study came in 2014 with his seed-corn fields divided into 4 sections.

Once all four trials were completed, Boyer used the Haney Soil Test and conventional nitrate test to gauge the amount available N for the following spring. While the plot with no cover crop had the most N in the soil, the amount of total N provided by each plot with cover crops was significantly higher, with the highest totals coming from the earliest planted-section.

“The earlier rye was planted, the more N it kept. On average, the three different planting dates kept 66 more pounds of N available than the area with no cover,” Boyer says. “Using 2015 prices, that’s between $30-$35 worth of N value per acre.”

A topic of emerging interest was the advantages and obstacles of transitioning acreage into and organic system. Wallendal Supply, a diverse strip-till and no-till operation near Grand Marsh, Wis., is in the process of converting a portion of their 3,300 acres to organic practices.

During a classroom session, Megan Wallendal, who co-manages the farm with husband, Eric, explained their motivations and methods for making the transition. 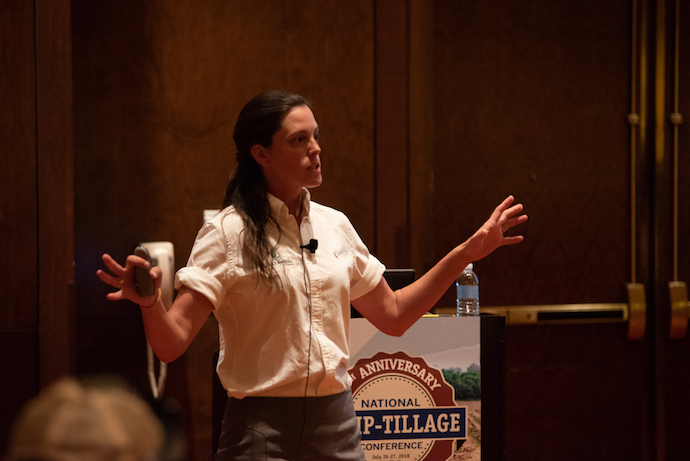 ORGANIC OPTIONS. Wisconsin strip-tiller and no-tiller Megan Wallendal, explains the motivations and methods transitioning 550 acres to organic practices including application of organically certified fish blend as a source of N.

“We’re 550 certified organic acres and we have another 200 in transition, and strip-till has been a really important part of that process, particularly in terms of banding nutrients,” she says.

The Wallendals have experimented with strip-tilled organic squash, cabbage, corn and dry edible beans, applying fertilizer in two bands, at 4 inches and 8 inches beneath the berm. One of the economic options they’ve liked is an organically certified fish blend (CHB Activate) produced by BioGro.

“We’ve got crops that can’t always reach out for that two-inch by two-inch application or we’re transplanting in a crop, so banding becomes a lot more economical than broadcast,” Wallendal says. “We band these products at about two gallons per acre for our edible beans and the broadcast ratio is about 10 gallons per acre. So we’re saving about $56 dollars per acre on just our organic amendments for strip-till.”

Wallendal adds that selection of applied N requires a more rigid approach in an organic system because the sources have to be certified and approved. Manure, fish, compost and chicken litter are all options the Wallendals have applied, with positive results.

“We’re using heavy compost system and putting on a lot of different nutrients and adjuvants that can help activate that soil,” she says. “We started out by selecting our lowest-performing fields and transitioned those to organic because we weren’t making any money on them using conventional methods.

“It’s a 36-month process but we’re seeing organic matter increase along with production.”

The biggest challenge has been weed control on organic acres. Being limited with chemical applications, the Wallendals use a tine harrow as a weed-control tool ahead of strip-tilling and no-tilling.

Once the crops are a little bigger the Wallendals will utilize a finger weeder on organic acres. They budget $150 per acre in their cost of production for hand weeding for all of their canned crops.

“We haven't reached that budget every year,” she says. “Overall, our cost of production with organic increased about 30-50%, but revenue is far higher. We have contractors coming to the farm asking, ‘We heard you have organic acres, can you grow this for us and we'll pay you a premium?’ That's pretty amazing.”

Working with as many as 15 different varieties, including broadleaf, grasses and legumes, Laurent “Woody” Van Arkel is always looking to simplify, yet enhance the performance of cover crops as a soil-strengthening tool.

“It wasn’t long after first trying strip-till that the light bulb went off in my head. I said, ‘Why can't I have something growing in between those rows?,’” he says. “There’s the perfect place to have a cover crop. It’s not in my way, and it’s covering the soil.

“I started with wheat in my crop rotation where I had applied manure and then after wheat harvest, plant a multi-species cover crop into those acres.”

Van Arkel acknowledges his 20 years of cover cropping has involved plenty of trial and error. One lesson he learned was how cover crop residue can be a slug deterrent in his strip-tilled crops.

“The only time I have trouble with slugs is when that cereal rye residue row is touching the corn row,” he says. “If I get it in the middle and there’s bare ground on each side, the slugs tend to leave the corn alone.

“The first year I tried this with sugarbeets. I went into the field one evening and could count five of them in my hand, underneath the handful of residue. I went to bed that night thinking, ‘These sugarbeets are like candy to these slugs. They’re going to eat everything.’

“But they never touched the sugarbeets. They stayed happily in that residue and my theory is they didn’t like to crawl across two to three inches of bare ground. They would rather stay where they were comfortable.”

Basing his findings off of the “4R” approach to nutrient management, McGrath emphasizes how the “right method” for any particular practice is subjective to the goals of a farmer, with economic, yield and environmental concerns considered.

Outlining a Maryland case study where 25 additional pounds of N was required on one farm to boost a field’s yield potential by 1 bushel per acre, McGrath highlights the importance of accuracy and whether achieving optimal yield is worth the economic and environmental considerations of additional applications.

“There are competing performance objectives,” McGrath says. “The most profitable system will likely have an environmental impact, and maximum yield does not equal maximum profit.”

When it comes to what technology is needed vs. what’s currently available for variable-rate fertilizer application, McGrath says farmers aren’t able to precisely map nutrient needs at the same resolution as fertilizer can be applied, leading to uncertainty when trying to interpret soil test results.

In most research, McGrath says rates should be altered every 14 inches, or roughly two corn plants.

“About 40-70% of acres in the U.S. are variable-rate, but what’s the agronomic basis for all of them?” McGrath says. “Yield is the first thing we look at when building a zone, but often yield maps have very little to do with actual nutrient requirements.”

While growers can use computers to interpolate soil data, McGrath warns that the samples need to be within a quarter acre (or 30 meters) apart in order to be interpolated with any scientific basis. Until the tools to map nutrient needs catch up with variable-rate technology, McGrath recommends farmers sample annually and shift their grids a quarter-acre every year, as taking samples at quarter-acre intervals for computer interpolation is both cost prohibitive and labor intensive.

“Nutrient requirement varies at less than a half meter,” McGrath says. “Use the money you’re spending on good samples to sample more frequently. Temporal variation trumps spatial variation every day, in any way.”