The very aggressive, hard-to-control weed first was found in a row-crop field in McIntosh County this summer. The other four counties are Benson, Dickey, Foster and Richland. Plants in two counties were confirmed through laboratory analysis, and NDSU Extension specialists confirmed the plants as Palmer amaranth in the other two counties. 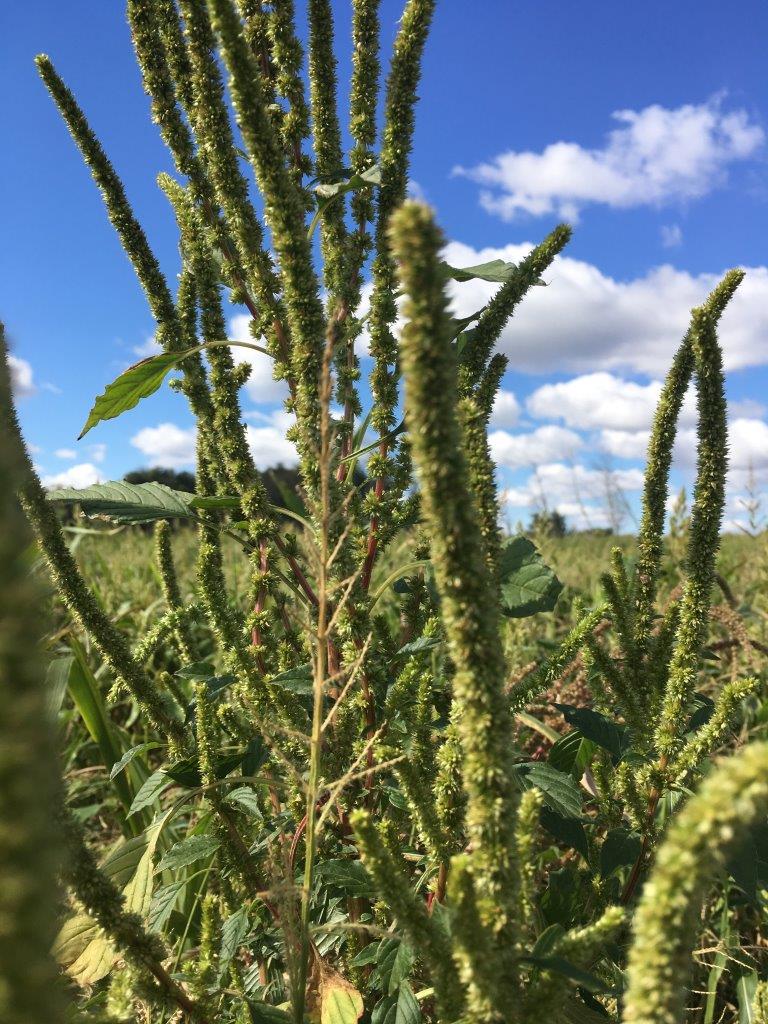 Contaminated seed, wildlife, water and wind are among other ways Palmer amaranth seeds can spread. Other sources include potting soil, hay from other states and native seed mixes used for pollinator or wildlife habitats.

Because Palmer amaranth resembles other pigweeds, it can be difficult to identify. Once someone contacts Extension about suspected Palmer amaranth, an Extension agent or specialist, or both, visit the field and investigate to determine what it is. If necessary, they also send samples to the University of Illinois Plant Clinic for DNA testing. Lab results take about two weeks.

To help producers, landowners and others learn more about Palmer amaranth and how to spot it, NDSU Extension developed a website, https://www.ag.ndsu.edu/palmeramaranth, and posters.

One way to distinguish it from other pigweeds is its leaf stem, or petiole. Palmer amaranth's petiole is as long as or longer than the leaf blade. Another clue is the female plant has spiny bracts that are bristly to the touch in the leaf axils and seed head. The seed heads can grow up to 2 feet long.

Anyone who sees a plant that may be Palmer amaranth should contact a local NDSU Extension agent as soon as possible. Visit https://www.ag.ndsu.edu/extension/directory for contact information.

Palmer amaranth poses a serious threat to North Dakota crops because it can grow 2 to 3 inches per day in optimum conditions and reach a height of 6 to 8 feet. A single plant can produce up to 1 million seeds. Especially heavy infestations have reduced yield up to 79 percent in soybeans and 91 percent in corn in other states. Unlike other annual weeds that need to be controlled only through early summer, Palmer amaranth emerges throughout the growing season.

Palmer amaranth also is a huge challenge to growers because it is prone to herbicide resistance.

The weed originated in the desert region of the southwestern U.S. (New Mexico and Arizona) and northern Mexico, then spread to the Mississippi Delta
before invading other states, including Missouri, Kansas, Iowa, Wisconsin, Minnesota and South Dakota.

Palmer Amaranth Resistance to 2,4-D and Dicamba Confirmed in Kansas