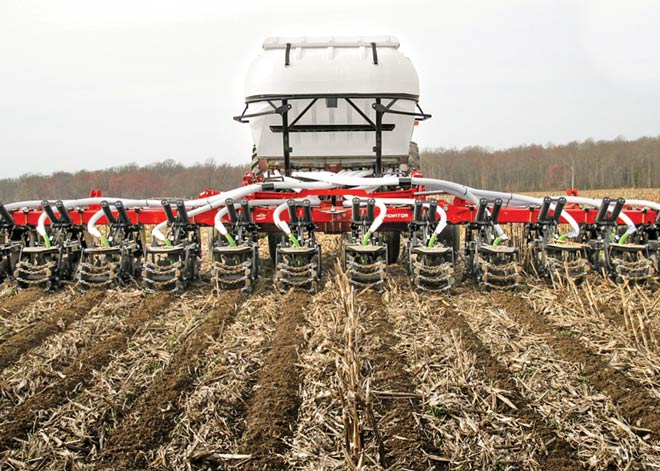 Parking the plow wasn’t easy for Frank Family Farms, but a transition to strip-till proved profitable, with a dramatic reduction in fuel costs and fertilizing flexibility.

Some strip-tillers look for an ‘a-ha’ moment during their initial transition to the practice as they search for visual results that they’ve made a wise decision.

For Dexter, Minn., farmer Ted Frank, his son, Tom, and brother, Ed, this moment came about 2 years and a few hundred acres into their strip-till journey. The Franks initially ran a rented 8-row SoilWarrior from Environmental Tillage Systems in the fall to evaluate the machine’s single deep cog and 2 containment wheels.

Strip-tilling about 50 acres of corn in 2010 and then another 100 acres the following year, Ted says they saw a noticeable difference in their spring seedbed when compared to the decades of deep-ripping they had traditionally done.

“That first spring we had the nicest conditions we had planted in following corn because the root balls were still in the ground, not in the way or rolling around on top of the soil,” says Ted, whose family farms 1,100 acres of corn and soybeans. “We actually had trouble with the navigation controller on our GPS system that spring, so we really didn’t have RTK on the planter. But it just so happened that the rows had a nice, straight row of corn stubble to follow.”

Profitable Approach To Strip Till With Cover Crops, Nutrient Management

Video: Digging Into the Health of Strip-Till Soil & Roots