Managing SCN for 2020 Should Begin Now

Now that the 2019 corn and soybean harvest is in full swing, it is not too early to start thinking about and planning for the 2020 growing season as well. For soybean farmers in Iowa, a critically important fall activity that can pay large dividends is soil sampling to determine soybean cyst nematode (SCN) population densities in fields in which soybeans will be grown in 2020.

Also, some farmers might consider sampling fields for SCN in which soybeans were grown in 2019 that produced disappointing yields for no apparent reason. Often, SCN infestations are found in areas of fields in which soybean yields were inexplicably low.

The need for knowing your fields’ SCN numbers is because although SCN had been kept pretty much “in check” for decades with SCN-resistant soybean varieties, almost all of those varieties had the same source of SCN resistance genes - from a breeding line called PI 88788. And using the same resistance genes for 20+ years has led to the buildup of SCN populations with increased reproduction on resistant soybean varieties.

The SCN populations in a majority of fields infested with the nematode in Iowa have relatively high levels of reproduction on soybean varieties with the common PI 88788 SCN resistance. Populations of SCN that used to reproduce at a level of 5% to 10% now are reproducing at levels of 50% or 60% or more. Put simply, many (most?) SCN-resistant soybean varieties are not as effective of a management tool as they used to be.

Need to know your numbers

So now more than ever, farmers need to know if their fields are infested with SCN and what the numbers are. The higher the number of SCN eggs in the soil, the greater the yield loss - even with resistant soybean varieties.

SCN is a consistent soybean yield reducer every year, not a “hit or miss” issue depending on the weather as is the case with many pathogens and pests. The nematode survives very well in the soil, even through a few years of nonhost corn, and SCN will reduce yields every year that soybeans are grown in infested fields, regardless of weather.

Fall is an opportune time to sample for SCN

It is relatively easy to determine SCN numbers in fields. All it takes is collecting a soil sample to be tested for the nematode. And fall is a prime time to collect samples from fields. 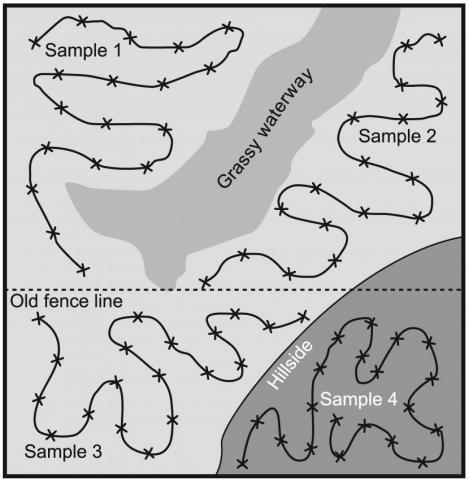 Figure: Example sampling pattern in a field with different management zones. Each “x” represents the location from which a soil core was collected.

What do SCN sample numbers mean?

The egg counts that correspond to risks of low, medium, and high yield loss in Iowa based on SCN numbers from the ISU Plant and Insect Diagnostic Clinic are shown below. The numbers are estimates; actual severity of yield loss is greatly affected by in-season temperatures and rainfall. Also, there is no one standard extraction method used to process soil samples for SCN; a few different methods are used throughout the US and Canada.

Different extraction methods can be more or less effective at recovering SCN cysts and eggs from the soil. So, categories of egg counts corresponding to yield loss severity likely will vary among different laboratories. 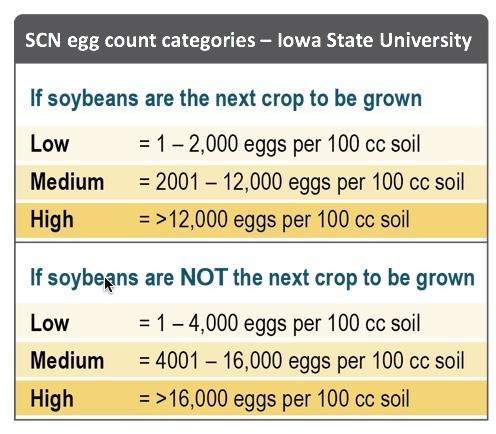 Now is the Best Time to Sample for SCN

If You Had SDS, Sample For SCN