When Craig Taylor decided to reduce machinery costs on his 725-acre corn and soybean farm in west central Illinois, he was convinced to move to no-till farming. But he also experimented with his crop service provider’s strip-till bar and liked the results.

“We tried it for five years, comparing strip-till against tillage and I saw only a 1-2 bushel per acre difference on corn, so I decided to just stick with it,” he explains. After that decision, he never looked back.

“One of the biggest things besides the reduced machinery costs has been planting flexibility,” he explains. “I am an LG Seed dealer, and using strip-till allows me the time to make my deliveries in the spring and then plant when I’m ready.

Also, he says by not tilling full width, his fields retain sufficient soil structure between rows to allow the flexibility of planting in much wetter conditions than those found on similar conventionally-farmed Muscatine soils.

“Over the past 5 years, I’ve seen an annual increase in organic matter of 0.10% on my cover crop acres. It’s slow, but it’s steady…”

“Yields have remained as good or better than many farms around me throughout the transition, and I really notice the difference after a big rain. My fields absorb water much quicker than those of my neighbors who rip and plow. I noticed this after only a few years in no-till and strip-till.”

Taylor, who has farmed his family operation near Media, Ill., since 1976, grows about 400 acres of corn and 325 acres of soybeans each year in a roughly 50/50 rotation plan.

Also, he keeps one field in corn-on-corn production for 3 years before moving it back into the annual rotation. In addition, since 2012, Taylor has flown on cover crop mixtures into both corn and soybean fields before harvest to enhance soil health, control erosion, and add organic matter to his farm.

“I’ve never had a bad crop of corn-on-corn, and on those acres the yields are comparable to corn planted on bean stubble,” he says. 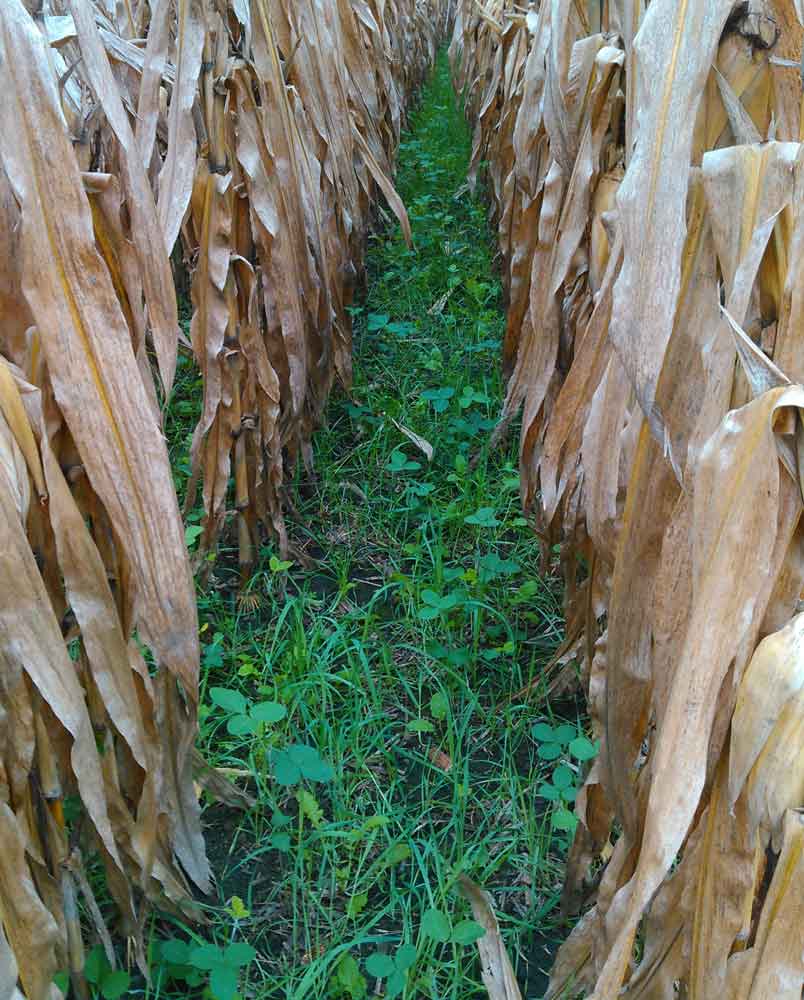 Looking back, Taylor’s decision to reduce machinery and related maintenance costs left him in a position to farm with only a Versatile 280 tractor, a 2018 White Precision 12-row, 30-inch planter, a 9695 Massey Ferguson combine and a 1000-bushel Brant grain cart. The bulk of other field activity on his farm is custom work.

When necessary, Taylor rents a Kuhn-Krause Excelerator vertical-tillage machine from a friend to help size field residue ahead of strip building.

“We’re committed to reducing tillage as much as possible, but in the past we’ve used the vertical tillage tool to size residue in the fields so the strip-till bar wouldn’t plug up.  Nutrien now has a new strip-till machine that may not have that problem,” he explains. “I still like to size the residue if possible because I think it helps with better planting.”

Taylor says he pays $25 per acre for the custom strip-tilling and fertilizer application which includes anhydrous injections and variable-rate phosphorus (P) and potassium (K) dry fertilizer placement in the strips.

“I tell my buddies who farm conventionally that by the time they hit the field with a ripper and a field cultivator then go back to knife in anhydrous, they’ll certainly have more than $25 an acre in costs, plus they have to maintain those implements every year.”

Taylor says one of the only drawbacks of his arrangement in leasing field work is compatibility of precision systems.

“I use a Trimble EZ-Steer assisted steering system using an RTX signal, which is accurate to about 1½ inches. My custom work is done with a John Deere system on RTK and the two don’t match up,” he explains. “So, I have to run the first passes to get the A-B lines and then they work with that. There’s some inefficiency doing that, but I remember driving it manually to make those strips and my arms got tired.”

“I tell my buddies who farm conventionally that by the time they hit the field with a ripper and a field cultivator then go back to knife in anhydrous, they’ll certainly have more than $25 an acre in costs, plus they have to maintain those implements every year…”

Taylor’s strips are primarily made in the fall, with 160-170 pounds per acre of anhydrous banded 4 inches deep on bean stubble ahead of corn. When he builds spring strips because of weather conditions, he’ll apply about the same amount depending upon soil test results.

Both fall and spring anhydrous applications include the use of N-Serve nitrogen stabilizer, Taylor explains. P and K is variable-rate applied according to grid-sample soil analysis.

On soybean acres, P and K are broadcast ahead of planting according to grid sample analysis. Taylor has soil samples pulled on about a quarter of his acres each year on a rotational basis and has mapped his farm in 2½-acre grids.

Strip-till is only used on corn and strips run 7 inches deep and 10 inches wide in spring or fall. Taylor doesn’t sidedress fertilizer for corn, but applies 30-50 pounds per acre  of liquid N during the season’s first chemical spray — based on plant vigor and market and weather conditions.

“Our on-farm experiments showed insignificant yield results for soybeans planted in strips, so all our beans are no-tilled and we have good performance with that,” Taylor explains. “My new White planter has hydraulic downforce with floating trash whippers and a coulter so we have little trouble planting, even in standing cover crop material.”

Taylor says he signed a Conservation Stewardship Program (CSP) contract through his local NRCS office in 2012 to begin cover crop use to build organic matter in his soils and help with water and wind erosion.

“We were already active in conservation efforts so the CSP made sense and we participated in a 5-year contract and when it expired we renewed. Now we have 7 years of cover crop management under our belt and we’ve gotten along really well with it,” he explains. “Over the past 5 years, I’ve seen an annual increase in organic matter of 0.10% on my cover crop acres which encompass 300 acres here on our home farm. It’s slow, but it’s steady.”

Taylor says some years the covers work better than others, depending upon weather conditions, but even those years when covers are stunted by cold weather in the fall, they green up and come back strong in the spring.

He generally uses a mixture of cereal rye and Seven Top turnips on corn acres. On bean fields the mixture is ryegrass, oats and turnips. All are flown on before harvest, and in 7 years, Taylor says only one aerial planting didn’t live up to his expectations. None of the covers receive any additional fertility.

“I’ll fly my cereal rye mixture onto corn anywhere from the Aug. 1 to September and hope for rain. On beans we’ll start flying the rye grass mixture on as soon as we see yellowing leaves.

Taylor says he doesn’t like to seed the cover in the beans too early for fear of them smothering out. In 2018, however, the oats got so tall he was running a lot of them through the combine with his soybeans and didn’t like that.

He says the cover crops have helped build soil organic matter and reduce soil erosion during off-season rains — even though his fields are mainly flat.

“We’ve planted green and terminated, and we’ve burned down the covers and planted in them with very similar results,” he says. “It depends on the height of the cover crop when you’re ready to plant.

“I do know cereal rye holds back weeds better than the others,” he adds, noting the additional barrier to herbicide-resistant waterhemp in the early season has helped him control the weed better with his post-emergence use of dicamba.

Taylor says he sees growing interest in strip-till and the use of cover crops in his area, and says for 2020 he hopes to demonstrate some 60-inch corn rows to see what difference his covers make in the wider rows and planting earlier.

“For strip-till especially, those strips make a loose, perfect seed bed and the ground in between is solid so I can go out with planting and harvest equipment easier — regardless of conditions that might prevent many from field work. “In a dry year the strips retain moisture, and in a wet year I may only have to wait a day or so longer to plant.”

Taylor says in addition to the benefits he’s seen from strip-till and cover crop management, his major long-term goal is to leave his farm with better soil health and less erosion for the next generation.

“I  have a daughter who wants to farm, and hopefully a grandson who will become interested as he grows. Our land is part of my legacy.”

Switch To Strip-Till, Cover Crops Friendly To Yields And Profits