Barry Martin was completely convinced of the benefits of a heavy cereal rye cover crop on his cotton and peanut farm near Hawkinsville in central Georgia long before cover crops were the rage.

He’d seen how use of rye eliminated topsoil crusting over his newly-planted cash crops after spring rains, and he was amazed at the elimination of soil erosion on cover-cropped fields.

In fact, the veteran farmer switched from conventional methods to strip-till nearly 25 years ago to accommodate the regular use of covers in his rotation. Today, Martin farms 550-575 acres of irrigated sandy-loam underlain by heavy clay producing a rotation of peanuts, cotton, corn, soybeans, wheat and grain sorghum.

With the exception of occasional help from a friend, the veteran of nearly 50 years farming handles field operations himself — with a lot less equipment since he moved to strip-till. For his rye cover, he uses bin-run seed produced on a dryland portion of his farm, and plants just over 2 bushels per acre. His rye seed crop is planted at 1½-bushels per acre.

While heavy cereal rye is the major cover on Martin’s farm, he prefers to keep it very light ahead of peanuts, and usually plants only enough to control erosion during the off season. “I don’t want it to get big ahead of peanuts because it provides habitat for a borer bug that stings peanuts and causes a dockage on grade,” he explains. 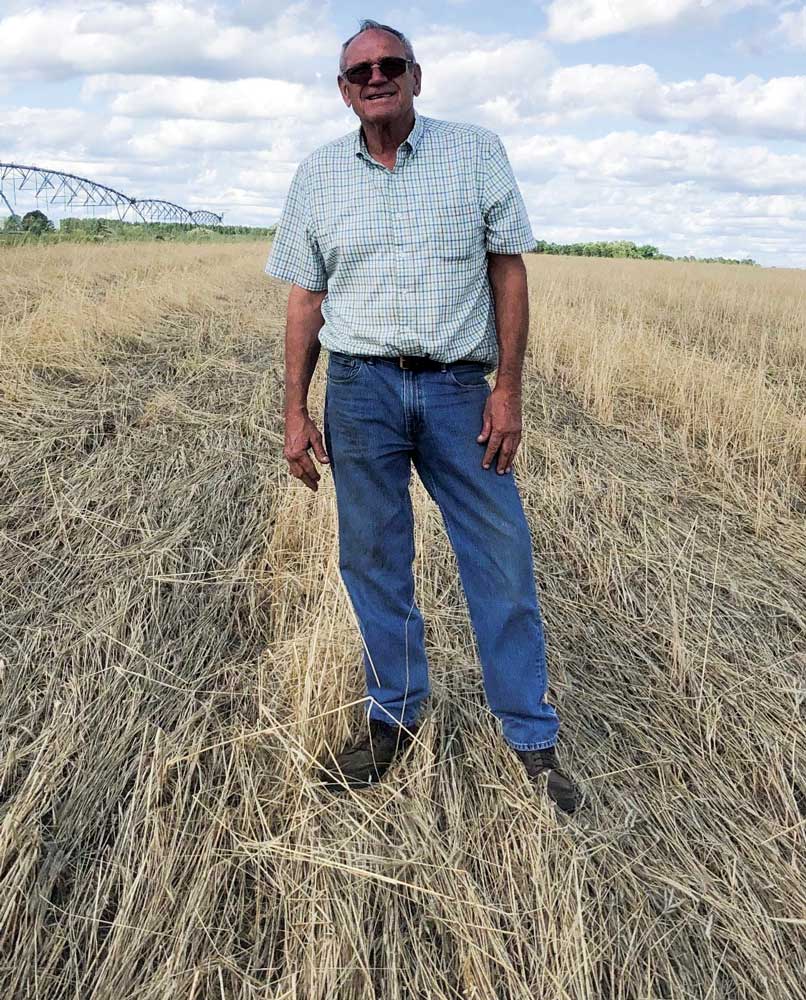 VETERAN STRIP-TILLER – Barry Martin has spent half his farming career as a strip-tiller, using the practice to take advantage of the benefits of heavy cereal rye cover crops on his irrigated peanut and cotton farm in central Georgia. He reports significantly reduced erosion, improved planting flexibility and improved soil organic matter from the methods.

“We started in 1996,” Barentine recalls. “People were experimenting with cover crops and strip-till, but no one in our area had made it work. Barry called me wanting help setting up a strip-till rig to run in his rye cover crops and I went out thinking it was just another routine farm visit. That call changed my life.”

Thinking weed control would be the biggest challenge, Barentine and Martin embarked on what turned out to be 4 years of experimenting and collaborating with others on equipment selection and settings to work in shoulder-high cover crops.

“We knew the heavy rye was the best option for weed control and soil protection in our area, but figuring out how to get through it was a challenge,” Barentine explains. “We traveled around a lot taking notes on other producer’s equipment and would go home and try it at Barry’s place.

Finally in 2000, they had a system that would work in the 6,000-7,000-pound rye residue Barry was growing. After that, it was easy and they saw nearly 75% of the farms in the area adopting similar techniques.

Martin says farming with strip-till was much simpler than the conventional methods he’d been using. “We had all this equipment to break the ground. Then we’d disc a time or two and then bed the fields. It took a lot of time, effort, manpower and horsepower just to get a crop in,” he recalls. “I didn’t want to do it anymore when I knew there was a way to save labor, fuel, time and trips across the field.”

“Because of the improved water infiltration of the undisturbed cover crops between my rows, when rain falls it stays put…”

Barentine says the switch to conservation tillage allowed Martin to drop at least one tractor and significantly cut his labor requirements.

“The first thing we noticed, however, was improvements in soil quality,” he adds. “Crusting went away in the first two years. We didn’t have to worry about replanting after a big rain. Organic matter content (OM) levels in Barry’s fields also began to rise quickly.”

Barentine says adjacent farms were testing 0.7% OM and after 3-4 years, some of Martin’s fields were well over 2%, a figure considered impressive for the area.

“I rarely see erosion on my fields, even after a 3-5 inch rain,” Martin explains. “Because of the improved water infiltration of the undisturbed cover crops between my rows, when rain falls it stays put and doesn’t run off to cause erosion.”

Martin’s equipment roster currently includes an 8320 and an 8300 John Deere tractor, a Deere 1720 no-till planter set on 38-inch rows, a Crustbuster twin-row planter for corn and peanuts, a spreader buggy for fertilizer application and cover-crop seeding, along with a KMC 6-row strip-till rig, and a farm-built roller crimper used to prepare tall rye stands ahead of the planter. 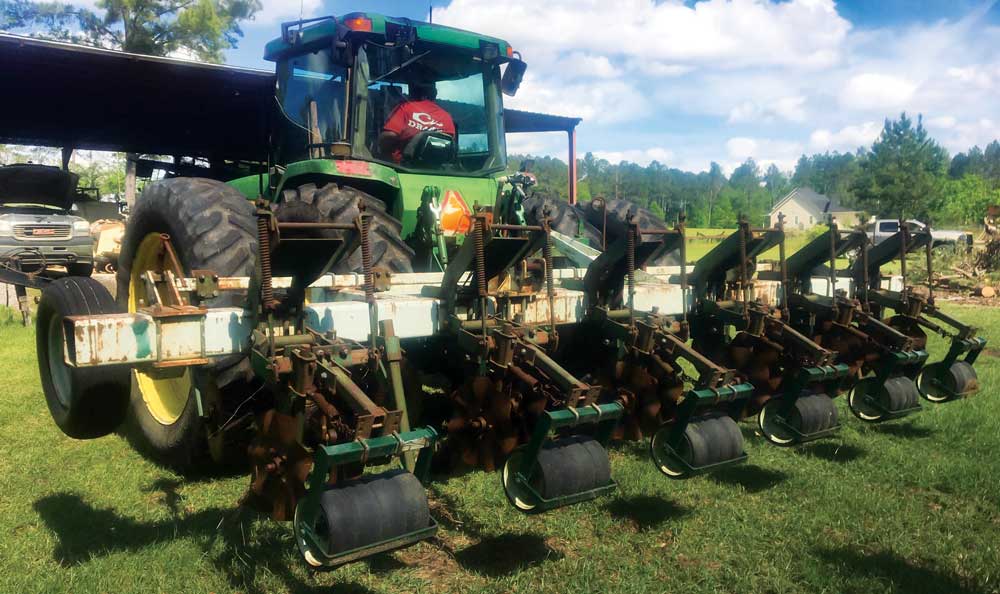 His 18-row sprayers include a Deere 6000 300-gallon machine, and a lighter duty 3-point locally-built unit.

“Strip-tilling automatically saves several trips across the field,” Martin explains. “But, in 2010 I realized I could make better time planting if the rye residue was all lying flat in one direction. That’s when I built a roller crimper out of 12-inch pipe casing with a spindle-axle run through it. I attached angle-iron in a spiraled pattern around the pipe to help crimp the residue to the ground, and mounted it all on a 3-point set up.

“For years, we’ve linked that roller crimper with the planter so we can roll, crimp, spray and plant in one operation,” he explains.

Martin prefers as narrow a strip as possible to disturb the least amount of soil and usually tries for about 4 inches wide. He runs 15-18 deep planting. With the planting zone already prepared, he doesn’t have to use row cleaners. The whole farm is mapped for Trimble’s Row Guide for planting and strip-tilling in one pass.

Through the years, Martin says his farm’s yields have steadily increased due to better moisture management, erosion control and the industry’s advances in genetics and nutrient management.

“Just the fact I have cover on the soil, I’m keeping moisture in the zone longer and that keeps the ground from hardening,” he says. “The only drawback is if weather conditions are cool at planting, the cover can keep ground temperatures cooler than on bare soil exposed to the sunlight.

Still, he says he’s never seen a drag on peanut yields and, because of better genetics and crop protectants, is producing up to 6,000 pounds of peanuts per acre, compared to 4,000 pounds 20 years ago.

His cotton yields range around 1,500 pounds of lint per acre depending upon weather conditions, and corn yields average 250-275 bushels per acre. In 2020, however, he plans to replace corn acres with grain sorghum or soybeans because of market conditions.

“We use petiole and leaf analysis on our cotton and apply some nitrogen (N) through the pivots. Usually, however, fertility needs are met with the spreader buggy,” he explains. The farm is zone mapped on 2½-acre soil analysis grids for managing phosphorus (P), potassium (K) and lime.

In addition to the soil quality benefits, Martin says his heavy rye use between crops has helped significantly in his battle with herbicide resistant pig weed. Barentine says Roundup Ready cotton was a big factor in the rapid adoption of strip-till in the area, but when herbicide-resistant Palmer amaranth developed it set the transition back for many growers who wanted to return to the plow. 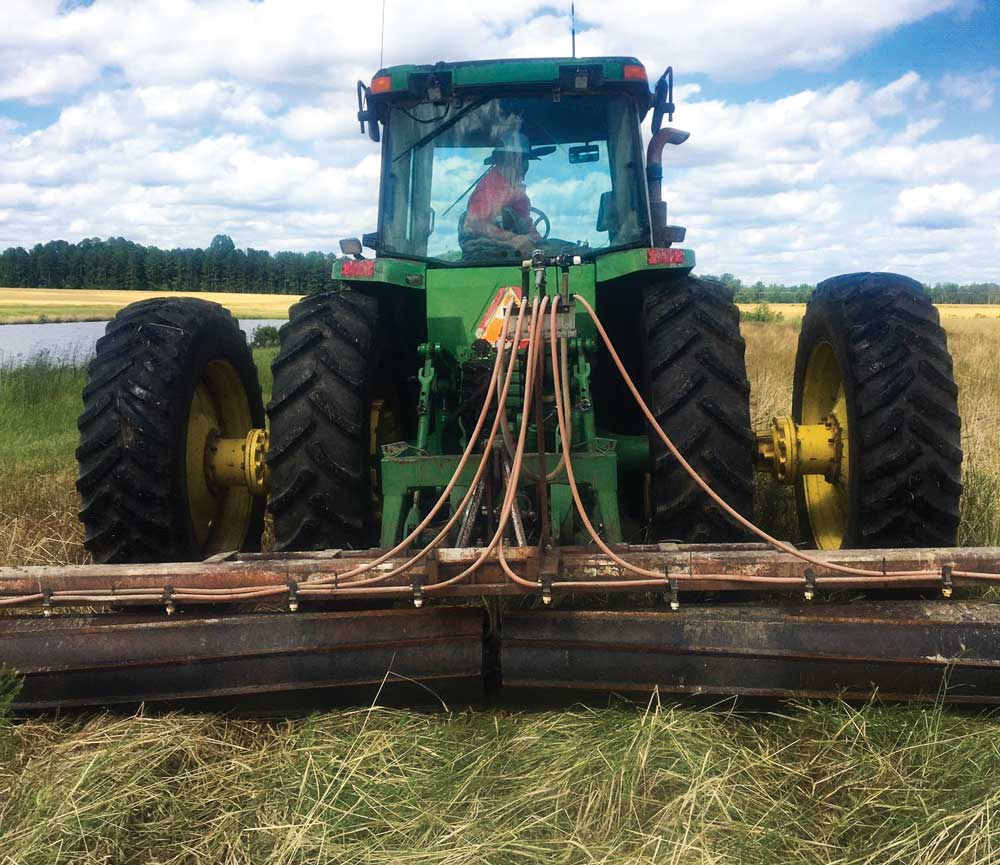 ROLLER-CRIMPER – This farm-built roller-crimper, fashioned from 12-inch irrigation well pipe casing and angle iron, gives Martin the capacity to plant in 6-foot rye covers. For years he has run the machine in tandem with his planter for single-pass rolling, planting and spraying.

“Barry stuck with it, however, and while many growers were spending upwards of $50 per acre for weed control, he had the some of the lowest herbicide costs in the county — even at the height of the pigweed onslaught,” he says.

“That was about the time I built the roller-crimper,” Martin explains. “I was committed to the use of the heavy covers, so we’d terminate the rye with glyphosate, roll it and plant directly through it.  It had a major effect on pigweed in my fields.

“I still had to use some herbicides, but not what some folks were having to use.” Today, he uses a tank-mix of glyphosate and Valor to burn down the rye.

Martin cites a 2008 Clemson University study that validates his use of a heavy thatch of cereal rye residue to shade the soil – which affects the germination of pigweed. He says the presence of rye residue in and on the soil seems to reduce palmer amaranth pressure in many of his fields.

He says his covers also allow him more flexibility at planting time.

“Many times I can plant when others can’t. They’ll be dry and my fields have a better chance of getting a crop to emerge. When the conditions are right I can plant. Where there’s no cover, the wind and sun can rob you of the top half inch of moisture in a single day,” he says. “If I rip today, moisture will be there tomorrow because of the mulching effect of the cover crop.”