After 20 years of strip-till, Nebraska’s Scott Bussell has proven effective in saving soil, moisture, time and labor, while enabling more efficient use of applied nutrients.

Pictured Above: BUSY MACHINE. Scott Bussell says he is pleased with the performance of the 16-row Kuhn-Krause Gladiator strip-till rig, and he trades every 3-4 years to keep up with the latest engineering. The Bussells build strips on more than 6,000 acres of irrigated High Plains Nebraska soil each season.

Scott Bussell says there’s a big difference in maximum production and optimum production when it comes to his farm’s bottom line, and he credits 20 years of strip-till management for helping him take advantage of that difference.

Bussell farms with his brother, Brent, and son, Justin, in southwest Nebraska near Imperial, and says his father, Delbert, was one of the first in the area to adopt strip-till as growers sought to limit soil erosion, conserve moisture and cut labor costs.

“I could grow better corn farming conventionally, but we can no longer afford to do that for a variety of reasons,” he explains. “We sacrificed some yield when we started strip-tilling, but at the end of the year we had more money in our pocket because of more efficient use of fertilizer, moisture conservation and a significant drop in labor costs.”

Located a county line from Colorado and a county removed from Kansas, the Bussells grow roughly 4,000 acres of corn, 2,000 acres of wheat and 600 acres of edible beans as well as alfalfa. The High Plains farm consists of highly variable soils — from blow sand to hard black ground — and lies atop the Ogallala Aquifer which provides irrigation to about 60% of the operation.

The Bussells irrigate with low-pressure sprinklers by Valmont and Reinke, and like many growers in the region have equipped all of their center pivots with drops to improve water application efficiency.

“The residue we leave on the fields with strip-till is very important in catching winter snowfall,” Bussell explains. “Any water we can save is important because, even though we can irrigate, we are on five-year allotments of only 13 inches of groundwater per year.”

“We’ve seen over 300 bushels on very productive spots in some of our fields. The wheat stubble lies there throughout the winter protecting the soil and catching rain and snowfall for the spring corn crop…”

Where his wells don’t permit access to sufficient water for corn-on-corn production, Bussell rotates corn, wheat and pinto beans on a 3-year rotation, a practice he says has boosted corn production.

“Our average farm corn yields vary widely but are 200-plus bushels, give or take, and we’ve noticed the best corn we’ll raise every year is that planted behind the wheat crop. We’ve seen over 300 bushels on very productive spots in some of those fields,” he explains. “The wheat stubble lies there throughout the winter protecting the soil and catching rain and snowfall for the spring corn crop,” he adds.

Another advantage of strip-till for the Bussells, however, is control of wind and water erosion. “Our light soils are like beach sand, and if it’s worked it never stops blowing,” Bussell explains. “Strip-tilling leaves residue in the middle to protect the soil. That cover also helps infiltrate moisture when we get rains.

“Twenty-five years ago dirt blew everywhere around here when everyone was farming conventionally. Now, if we see blowing dust it invariably will be because someone is working bare ground.”

The major economic benefit of strip-till for Bussell Farms, however, has been the reduction in labor and machinery costs.

“With conventional tillage we were in the field about five times during the season,” Bussell says. “Now one driver on a strip-till machine gets it done. The next pass is the planter and then the combine, compared with 4-5 field operations in the past. Our total labor force is the three family members and our employees Brock Liebhardt and Kelly Berry.

“Reducing our field passes has also saved us significant amounts of fuel and time over the years. We just put a lot fewer hours on our equipment.”

Bussell says reduced field traffic has also reduced compaction. Limiting field operations to strip-tilling and harvest keeps heavy tractors out of the field through the season and that allows soils to mellow.

Now, Bussell says he can take a penetrometer and shove it right down in the trench, which means corn roots can easily reach moisture and nutrients.

Bussell’s general rotation practice is to harvest wheat in early summer and strip-till the stubble in early fall and let the field lie through the winter to mellow ahead of corn. After corn harvest, he works the ground the following spring with a Sunflower 6830 vertical-tillage machine to prepare the seedbed for pinto beans. After beans, it’s back to a no-till winter wheat crop.

“For corn-on-corn acres we’ll strip-till in the fall or early spring as conditions dictate,” he explains. ”I like to have the strips mellow for a while before planting, so we try to build the strips in the spring as early as possible. 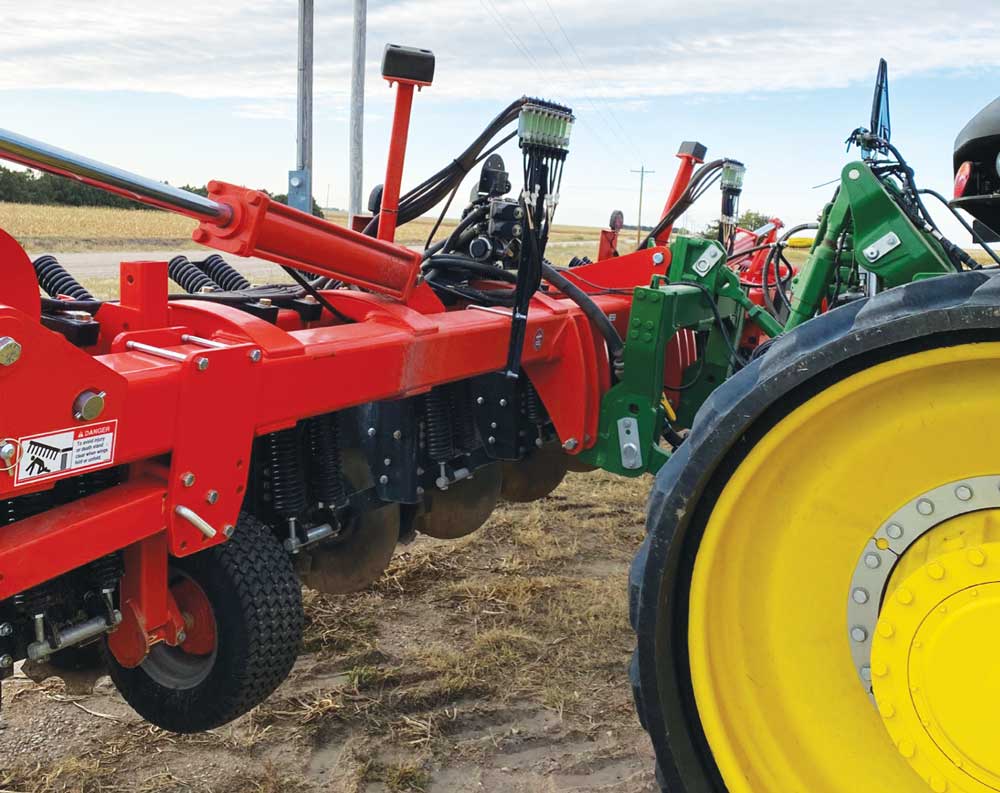 VR FERTILIZER. A variable-rate system is a key component on the Scott Bussell’s 16-row Gladiator strip-till machine, with plumbing connecting a 1,000-gallon feed tank to each row for liquid fertilizer placement 4-6- inches deep and at rates from 5-40 gallons per acre.

“If we run the strip-till rig right ahead of the planter, it pulls up the ground and if we don’t let that settle and fall before planting, a rain can cause newly-planted seed to sink as much as 6 inches from where it was planted. The more time we can let the soil settle, the better our results.”

Bussell runs his 16-row, 30-inch, Kuhn-Krause Gladiator strip-till machine 6-10 inches deep, depending upon the field and what it takes to get below the compaction layer. His berms average about 8 inches wide, and he runs the strip-till rig about 5 mph.

“Our soils vary so much we can cruise in some areas and really have to pull in others,” he says. “Working in heavier ground the strip-till rig does take a lot of horsepower.”

Factory row units on Bussell’s 2019 Gladiator feature an opening coulter with trash whippers and a shank followed by two berm-builders to close the trench. A rolling basket behind puts the finishing touches on clods and residue.

“We use SureFire’s LiquiShift variable-rate fertilizer system on the strip-till rig to apply about a third of our expected nutrients for the year,” he says. Fed by a 1,000-gallon liquid tank, the system bands the fertilizer 4-6 inches deep at variable rates ranging from 5-40 gallons per acre through shank-mounted tubes.

Rates vary based on soil type and fertilizer prescriptions from Bussell’s consultants, B&B Scouting and Nichols Crop Improvement. “Throughout the season, we fertigate the irrigated acres, spoon feeding the crop according to results of weekly scouting visits and several tissue samples we take each year,” he says. “By feeding the crop only what it needs as it develops, we avoid leaching and make better use of our inputs.”

Bussell says over the years, the farm’s fertilizer use has remained relatively flat, but the ability to apply more nutrients to the better-producing soils, and less to less-productive areas has improved overall productivity.

“The LiquiShift system has been a very good tool,” he says. “It’s fairly sophisticated but it works reliably, and RiteRate Ag Systems has helped us install and calibrate it well for our equipment.”

Bussell runs the strip-till rig and planter at 90 degrees one year, and 78 degrees the next, following the GPS guidance system on his John Deere 9570 RT tractor. He uses a fully-automatic GPS-cued Deere 1770 24-row VR planter to plant back in the same spot every other year.

“We have split our 30-inch rows in the past, but saw little if any yield advantage. We like our 90/78 system because the field residue flows better for the planter if we cross the rows.”

In 20 years, the family has used a variety of strip-till rigs from DMI, Orthman and Kuhn-Krause. “They all did a good job, but a number of years ago we settled on the Krause machine. We generally trade them after 3-4 years to stay up-to-date on their engineering, and we appreciate the fact they are easy to adjust and they require very little service.

“When a machine is easy to adjust, it’s more likely the operator will take the time to fine-tune it to specific field conditions, and that just means we do a better job.”