Pictured Above: SMOKING SOIL. Ohio soil scientist Frank Gibbs uses his “smoking tile” experiment to demonstrate the number of worm middens in a section of farmland. Blowing smoke into a cross section of the soil profile, Gibbs says the more that escapes through the surface is an indicator of good soil health and high earthworm activity.

Intentionally or not, farmers who’ve taken up strip-tilling have already made a commitment to rebuilding soil health. According to Rawson, Ohio, soil health expert Frank Gibbs, by being a bit more deliberate, strip-tillers can magnify the impact of their conservation efforts in ways that will show up on their bottom line.

The former USDA soil scientist and founder of Wetland and Soil Consulting Services (WSCS) has been a conservation advocate, agronomist and soil health expert for 40 years.

During his four decades of in-the-field experience, he’s developed basic principles of soil health he thinks strip-tillers should examine carefully:

1 Soil: Do Not Disturb

The value of limiting soil disturbance is well-known to strip-tillers and no-tillers, but Gibbs stresses the importance of being consistent. For him, this means steering away from routine “deep ripping” or moving strips over one row over every year.

“If you find that you have a plow pan an inch thick, you may not need to rip it at all,” he says. “If it’s 2 inches or 3 inches thick and it’s spread across the field rather than just the end rows, you probably will need to bring in a ripper.

Straight shanks tend to make a V-shaped shatter zone and the ones with wings will make more of a U-shape, he says, but farmers need to be sure they have very dry conditions so their not just smearing the soil.

“The important point is to do it once and do it right,” Gibbs says. “After that, use a strip-till and cover crop system to prop open that soil structure. If you come back repeatedly to rip it, you’ll lose the progress
you’ve made.”

Because Gibbs advocates for adhering to a strict controlled traffic regimen, he says farmers’ strips should be built and maintained in the same spot year after year.

“It’s important to be consistent,” he says. “Some farmers will strip-till one year, then vertical- or full-width till the next as they go into corn. It takes at least 5 years to start making good headway with earthworm populations and soil structure, but if you keep jumping in and out with different methods, you’ll never get anywhere. 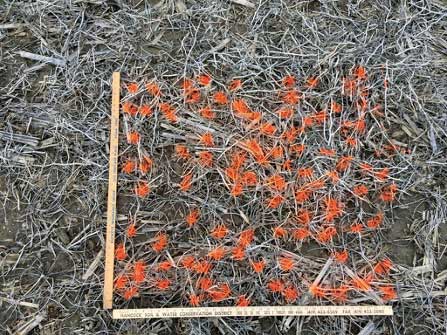 GET OUT AND COUNT. Frank Gibbs recommends counting earthworm middens in your fields to estimate the population. This particular sample from a field that has been no-tilled for 50 years had 87 middens within the square yard measured ­— breaking down to 9.7 per square foot.

“Set up your patterns and drive lines and stick to them. It’s tempting to think that by moving the strips over annually you’re building planks across the field. Truthfully, you’re building compaction — and it may come back to bite you.”

To reduce compaction on the field, a strip-tillers must not only find and address soil damage that’s already been done, but also do no harm themselves. Gibbs’s argument for strict controlled traffic is predicated on the idea that the soil you drive on will be compacted no matter what, so it’s best to limit that path.

“It is incredibly important to remember that the very first time you drive over the soil, you’re causing 80% of the compaction,” he says.

Investigating the damage that’s already been done over the years is a different story — one that requires a shovel/backhoe, a can of spray paint and a lot of determination. Seeing soil structure and earthworm population density as the best indicators of health, Gibbs focuses on them specifically.

“I suggest going into several of spots in your field that represent various soil types and conditions, then laying out a square yard in each,” he says. “Then I’d look for nightcrawler middens (castings). Each time you see one, hit it with some brightly colored spray paint. Then count them.”

By dividing the total by the 9 square feet in a square yard, the population per square foot can be established. Averaging these sums across the various management zones will give a farmer a rough idea of how many earthworms are setting up shop across the field. -“Five spots per management should be enough to get a pretty good idea,” says Gibbs. “Once you start digging sections up, you’ll start noticing things right away — are you having compaction problems? Are you not keeping enough residue out? Not cover cropping? These things can influence that.”

“It takes at least 5 years to start making good headway with earthworm populations and soil structure, but if you keep jumping in and out with different methods, you’ll never get anywhere…”

Nightcrawlers are a huge component of building organic matter, he says. They process crop residue and build those organic resins that make for nice crumbly soil structure in the top layers and blocks of clay in the subsoil that allow for greater root penetration and air and water movement. Nightcrawlers can easily make holes that are 6 feet deep.

While there’s no specific number that determines if the soil is “healthy” and climate will always be a factor, Gibbs says the more nightcrawlers in your fields, the better.

“Of course, this is most applicable to the humid regions on either side of the Mississippi — and if you have high salinity you may not find many nightcrawlers,” he says.

“But, typically we find 2-3 middens per square foot on an average field that has been in a minimal tillage and cover cropping program. That usually increases to 4-6 if a farmer is also using a nice variety of cover crops. For farmers consistently pushing their management with control traffic, a nice crop rotation, and year-round growth — we’re seeing 8-9 middens per square foot.”

Finding a scant earthworm population might be an indication that a farmer needs to make their fields more hospitable to these invertebrate allies.

“Their number one issue is drainage — if you have ponding, nightcrawlers will move out overnight,” says Gibbs. “They need air in the soil. When they move out of a poorly drained area, they’re slow to come back as well, which can make the issue worse. Focusing on good surface drainage and following up with good tiling will make a world of difference.”

Just as important as air, Gibbs says any growing population of nightcrawlers will need a consistent supply of food. 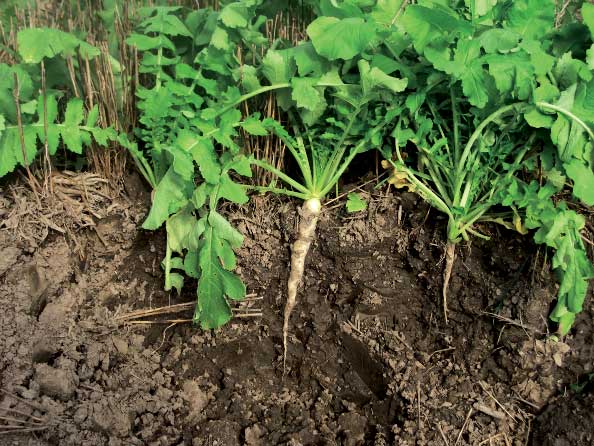 POUR ON A COCKTAIL. While a single species cover crop application is better than nothing, Frank Gibbs advocates for seeding a mix or “cocktail.” His recommendation is to use a legume to create nitrogen and break down residue, a carbon source such as a grass, and a brassica like radishes or turnips to act as a reservoir to store nitrogen over the winter.

“Keeping residue on and maintaining a varied and aggressive cover crop program are the best ways to do this,” he adds. “As long as you have a good carbon/nitrogen ratio, your residue will disappear very quickly. We’ve done several studies and consistently seen that if you have up to 6 or more nightcrawler holes per square foot, they can process up to 9 tons of residue from a cover crop and have it be gone by the end of August before you come in to harvest. It’s amazing.”

As far as Gibbs is concerned, your fields should have something actively growing on them for as much of the year as possible. Although single species cover crop applications are better than nothing, Gibbs says a well-thought out variety of species or “cocktail” is ideal.

“You should have a legume to create nitrogen and break down residue,” he says. “Then you need a carbon source — like the grasses. You should also have a reservoir to store the nitrogen over the winter and release it in the spring. Brassicas like radishes and turnips are best for that purpose. Having those three plant types in a cocktail can make a huge difference.”

Timing applications is usually a strategical hurdle, but Gibbs always pushes for seeding as soon as possible. Because corn can shade out early growth in cover crops, Gibbs suggests adding a small grain to the rotations. Gibbs notes that the added crop diversity on its face has benefits, but that it allows for earlier cover crop seeding compounds that boost.

“It’s probably not what most strip-tillers want to hear because they’re doing a lot of corn and beans, but getting a small grain in there can actually help get about five times — or more — the amount of organic matter down into the soil,” says Gibbs. “That multi-species cover crop has a lot longer time to grow because that small grain is usually coming off somewhere in July. You’ll see a much bigger benefit from that than just straight cereal rye ahead
of corn.”

The last pillar of Gibbs’s soil health program will pretty much hold itself up if the others are already in place, he says. A varied crop rotation with an aggressive multi-species cover crop program will introduce microbes that may not have been in a field’s soil otherwise.

“Every root has different organisms and microbes on them, some are specialized to cluster right on the tips,” says Gibbs. “Each variety is bringing in more diversity with it.”

Supporting a healthy earthworm population will ensure that microbes get spread out.

“Nightcrawlers are basically transporters,” Gibbs says. “They can easily move these microbes up and down the soil profile just as they pass through. Honestly, it’s all a big web and adhering to a management program that puts this much emphasis on soil health really saves money and increases sustainability long term.”

The Five Principles of Soil Health