When your family has been farming some of the same ground for more than 255 years, there have been many changes. Yet some of the most meaningful and innovative changes have taken place over the past 25 years as Brian Newcombe and his brother Craig moved to no-till and strip-till at Cornwallis Farms in Port Williams, Nova Scotia.

Representing the ninth generation, the brothers live in an area that receives 60 inches of yearly precipitation near the Bay of Fundy, which is located off the western shore of Nova Scotia. This Atlantic Ocean area has the highest-changing tides in the world, as the bay’s water level rises and drops 56 feet every 12 hours.

“We’re from the Annapolis Valley in Nova Scotia, just east of Maine,” Brian Newcombe says. “We’re in a microclimate so we have a lot more heat units than does the rest of Nova Scotia. We’ll grow up to 91-day corn, and we can get 0.3 soybean to yield 60 bushels. The longer daylight helps us a bit, but we also have a livestock operation in addition to our 1,800 acres of cropland.”

Located near a village of 1,000 residents, the farm is highly diversified. Craig handles the 850,000 broilers they turn out each year, manages the 20,000 laying-hen operation and operates the feed mill that produces the farm’s dairy and poultry feed needs. This includes operating an extruder for processing their soybean crop for on-farm dairy and poultry feed.

Learn more about Cornwallis Farms in Port Williams, Nova Scotia, in a conversation with Brian Newcombe and Editor Frank Lessiter who discuss the diverse operation that includes a dairy, chickens and about 1,800 acres of corn, soybeans and wheat is spread out over more than 100 separate small fields. Visit www.StripTillFarmer.com/Newcombe to listen to the podcast.

The crop rotation includes 375 acres of winter wheat followed by cover crops, 525 acres of soybeans seeded in 7½-inch rows and 750 acres of corn — including 60 acres cut as silage for the dairy herd. They plant corn-on-corn, corn after soybeans and plant corn directly into green cover crops seeded after winter wheat harvest.

Grown for dairy feed, 150 acres of forages are a mix of alfalfa and grasses. These forages are seeded in 7½-inch rows in two trips running in different directions with a 30-foot John Deere 1890 air seeder. Besides forages, the air seeder is also used to no-till soybeans, winter wheat and cover crops.

The Newcombes started no-tilling in 1994 with a Case Cyclo 6-row planter equipped with the Rawson three-coulter zone-till system. They later ordered a 12-row 3600 Kinze planter with finger meters and down pressure springs, which were removed.

Having difficulties in the mid-1990s with no-tilling corn into winter wheat stubble ground that remained cold and wet in the spring, the brothers moved to a Yetter 6-row strip-till system. Today, they use a 12-row Dawn Pluribus strip-till system, building berms in the spring due to a combination of a corn harvest that doesn’t start until November 1 and the area’s typical wet conditions during the fall months. 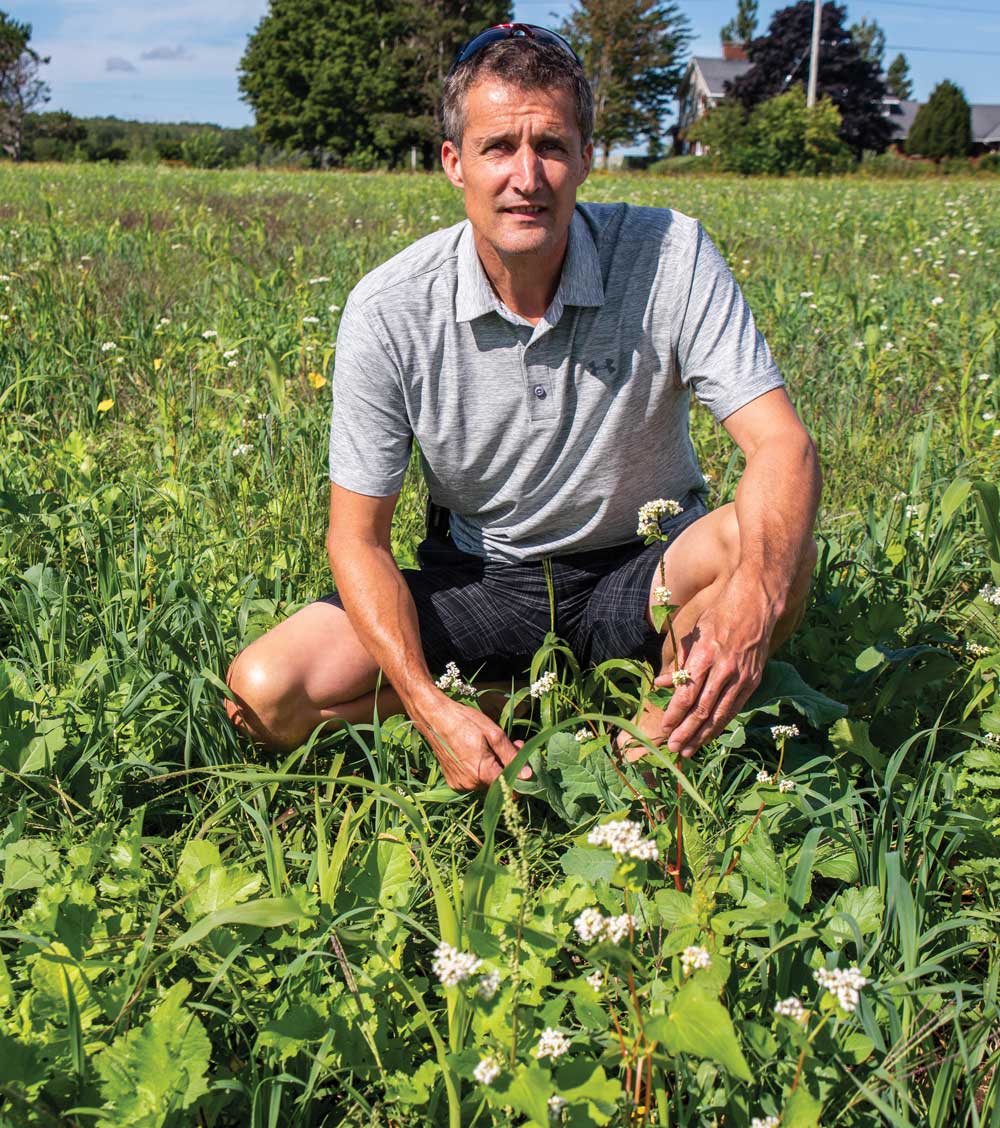 HOME-GROWN NUTRIENTS. Soon after seeding with the 9-way mix and oats, Brian Newcombe says the farm’s 375 acres of cover crops receive a quick dose of manure.

“We didn’t get enough plant uniformity when no-tilling corn with our cold soils and growing conditions, but we have overcome these concerns with strip-till,” says Newcombe.

Along with 28 pounds of oats per acre, a 13-pound, 9-way cover crop mix is seeded immediately after harvesting 375 acres of wheat harvest in August. The multi-species cover crop mix flows from one tank on the air seeder, while a second tank holds the oats.

“When seeding cover crops into a heavy wheat residue, the more species we include in the mix, the more diversity we get and the better chance of getting a good stand during 3 months of fall growth,” says Newcombe. “We’ve learned cover crops are important with both no-till and strip-till to increase soil organic matter. Cover crop seed and drilling costs run us around $50 per acre.”

While they’ve tried broadcasting cover crops into corn at the V4 stage, getting enough moisture at this time to establish a cover crop before shading can be an issue. Aerial seeding is not an option due to their small-sized fields and nearby residential housing.

“I’ve done replicated plots of cover crop after winter wheat so we get a nice 8-9-way mix. And then we burn down every other strip in the fall, and let the other strip go green,” Newcombe says. “In the spring, I’ll strip-till the sprayed plot and the other one I’ll plant into green cover. The first year, we replicated the trials in 8 plots. In the fall strip-tilled ground-up, yield was 2.3% higher than planting into the green in spring.”

In 2019, the Newcombe’s experimented with mounting a Valmar 4056 seeder run by a John Deere 2000 rate controller along with HFL Biomass Builder row units on an old 6-row Yetter strip-till bar for interseeding cover crops into standing corn at the V4 stage.

With extensive chicken and dairy numbers, manure makes up a significant part of the Newcombe’s fertilization program. Manure samples are tested for nutrient value and this data is used along with GPS and computer data to get a look at applied nutrients and to calculate application rates.

“But if we’re applying chicken litter and I’m applying 32% in a small triangle field I don’t want to go back and topdress it again,” says Brian Newcombe. “I’ll apply manure and whatever N I need to finish the field, and I don’t go back again because I’m just running it over the head rows. But the bigger fields, I don’t mind going back again, I can go back and make an AMS application.”

From the 70 dairy cows, they have solid, liquid and composted manure while the 20,000 layers produce semi-solid manure. The 850,000 broilers provide dry manure that is stored under cover, making it easier to spread on the no-tilled ground and to reduce odor concerns among nearby villagers.

The brothers use the farm’s 60-foot scale to weigh spreader loads to calibrate manure rates, as moisture and weight changes from load to load, which impacts the spreading pattern. Plus, relying on GPS and auto-steer leads to more effective manure application.

“My goal was to use different combinations and rates of annual ryegrass, radish, hybrid brassica, crimson clover, berseem clover, hairy vetch and turnips that will establish and can survive the shading of the corn,” says Newcombe. The cost of the cover crop interseed mix ranged from $20-$26 per acre.

Newcombe believes in feeding the soil rather than the growing plants, an idea he picked up from Neal Kinsey, a world-renowned Missouri crop consultant.

Strip-tilled corn is planted with 5 gallons per acre of in-furrow liquid 6-24-6 pop-up fertilizer along with a 2-by-2-inch band of 40 pounds of nitrogen (N) per acre applied with the strip-till unit. Phosphorus and potassium rates are based on soil test results. 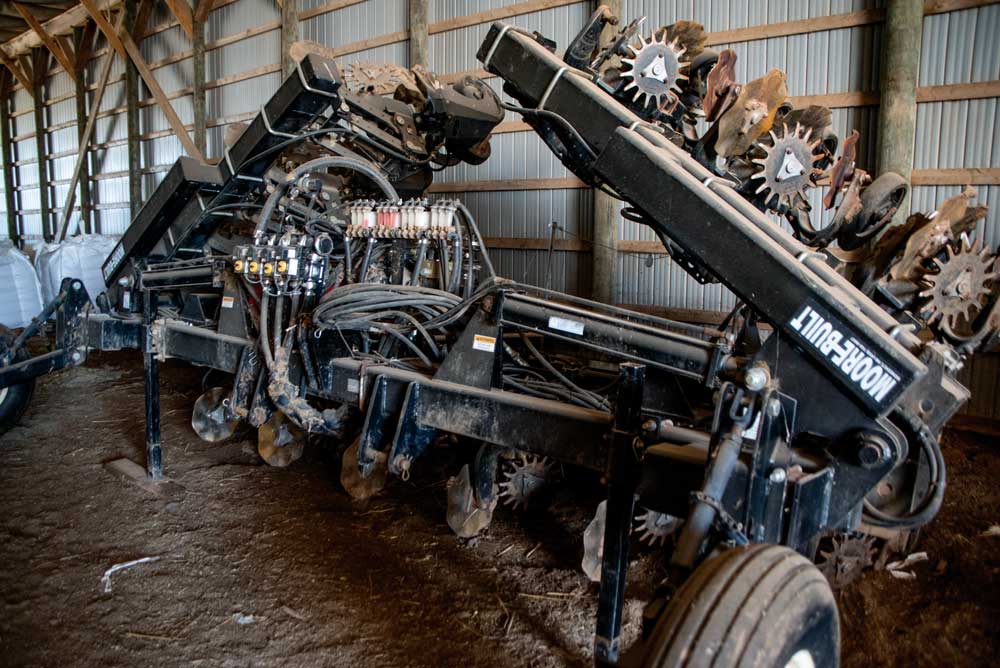 SPRING-TIME BERM. Because of the area’s cold and wet fall conditions, strip-till berms are built in the spring just prior to planting corn.

“While we use variable-rate fertilizer application, we still apply about the same amount of total N as in the past,” he says. “But we get more yield with variable-rate application because it reduces the N application rate where it is not needed and applies more where the corn can better utilize it.”

He applies 32% N while strip-tilling corn. Equipped with a 90-foot boom and 1,000-gallon tank, Newcombe uses a self-propelled Apache sprayer to apply in-season N not only to corn, but also to wheat in March and May.

He credits the investment in the sprayer’s section control with paying off in less than a year’s time, as it provides more accurate fertilizer placement across the width of the entire boom than was the case with dry fertilizer.

Plus, it’s easier to adjust rates when spraying herbicides and liquid fertilizer on more than 5,000 acres each year. With numerous small-acreage and odd-shaped fields, Newcombe credits the sprayer’s section controls with avoiding what could otherwise be 12-15% in costly overlap concerns.

Since N rates involve some guesswork with the farm’s extensive use of manure, corn plots with varying N rates are planted to fine-tune application rates. With hairy vetch making up a large amount of the cover crop mix, Newcombe didn’t see any yield difference when he dropped 40 pounds per acre of N from the application rate.

Now, he’s doing further testing to see if hairy vetch can provide 60-80 pounds of N per acre without sacrificing any yield.

Even as margins tighten across North America, reducing tillage, adding cover crops and diversifying with dairy cows and chickens have helped the 255-year old Newcombe family farm stay efficient and profitable while protecting
the environment.

What Each Species Brings to the 9-Way Cover Crop Mix

Brian Newcombe seeds a 9-species cover crop mix at a rate of 13 pounds per acre after winter wheat harvest in early August. At the same time, he seeds 28 pounds of oats per acre. Here’s a rundown on each of the multi-species along with Newcombe’s comments on the value each adds to the mix.