Farming practices in northeast Wisconsin have changed for the better in the past 7 years, thanks largely to the conservation efforts of Mike Pribyl and Brent Petersen.

Pribyl, who farms in Green Bay, Wis., had long followed the seasonal patterns of conventional tillage practices. But a series of conversations with Petersen, an agronomist with Brown County Land and Water Conservation, led to a transition, first to no-till and then to strip-till.

“[Strip-till] is the next step for some producers that we don’t have the opportunity to work with on straight no-till, and it’s been a great fit here so far,” Petersen says.

In spring of 2020, Pribyl and his father, Doug, launched a custom strip-till business, and they’re finding farmers are increasingly interested in strip-till’s potential.

“We see those positive impacts pretty quickly once we start introducing more diversity and minimal tillage,” Pribyl says. “I had a meeting with a producer last week, and we were talking about strip-till and how we can better use it to benefit their operation — not only from a soil health standpoint, but from a financial standpoint.”

Northeast Wisconsin has a lot of clay soils and significant amounts of runoff. The runoff has led to crusting and deteriorating soil health, as well as nutrient loading issues in Lake Michigan, Lake Winnebago and the bay of Green Bay.

Petersen, whose position is funded by the Natural Resources Conservation Service, approached the organization about setting up a demonstration farm in the lower Fox River basin to showcase conservation practices that reduce runoff. He began working with one of Pribyl’s customers to set up a demonstration farm, and the two approached Pribyl in 2014 about making the switch from heavy conventional to reduced tillage.

“We’re always up to a challenge,” Pribyl says. “We started with no-till and cover crops, and that was kind of our leap of faith. No-till isn’t for everybody — some people need that intermediate step, and that’s where strip-till comes in.”

Since then, conservation tillage has been spreading throughout the region.

“There’s now about five or six demo farms in this northeastern Wisconsin pocket,” Petersen says. “It’s growing. We want to demonstrate practices that we don’t traditionally try in this neck of the woods.”

Pribyl’s own farm consists of 35 acres, but he works on upwards of 8,000 acres every year through his custom business. He does about 1,500 acres a year in custom strip-till and aims to double that number moving forward. In a typical year, Pribyl also sidedresses 6,000-7,000 acres of corn and plants about 2,000 acres of corn and beans.

A 16-row ETS Soil Warrior 4540SXD is his tool of choice for strip-till. Pribyl says the zone created by the Soil Warrior after one pass plants very nice, and emergence has been fantastic. It’s a welcome change from the sidewall compaction he ran into when doing no-till.

“Brent and I took some pressure tests out in the field, and we were seeing well over 300 PSI in some cases,” Pribyl says. “So we said, how do we alleviate that? And that’s where strip-till really came into it.”

He recalls a grower who experienced sidewall compaction when planting corn into alfalfa ground. Pribyl didn’t do any fall tillage on those fields, but he strip-tilled them in the spring. He placed some nutrients in the strips, and Pribyl says it resulted in a “night and day” difference in yield with just a quarter of the work of the year before.

“A lot of people look at things in terms of efficiency,” Pribyl says. “We look at things in terms of effectiveness. This strip-till system is enabling us to be significantly more effective out in the field. We still might have to plant a little bit slower, but overall, we’re significantly reducing our man hours by implementing the strip-till system, and the fuel savings are phenomenal.”

Pribyl estimates that strip-tillage consumes only about 1/3 of the fuel of conventional tillage. Petersen also notes the time savings that producers enjoy when the weather warms in spring.

“The strips are ready to go, and all we have to do is plant,” Petersen says. “We don’t have to go up there and work the ground twice.”

Saving time is just as important to Pribyl, who jokes that he’s running a one-and-a-half man operation with his father. Doug works full time in manufacturing, an industry in which accuracy is critical. That’s why their business aims for precision, rather than production. They strip-till in both spring and fall, and they’re especially interested in doing more acres in fall to help spread out their workload.

“You can’t put a value on all this additional manpower that you need to stay ahead of that planter,” Petersen says. “That’s pretty significant. A lot of this work can be done a month in advance or when things are a little freed up, I would argue.” 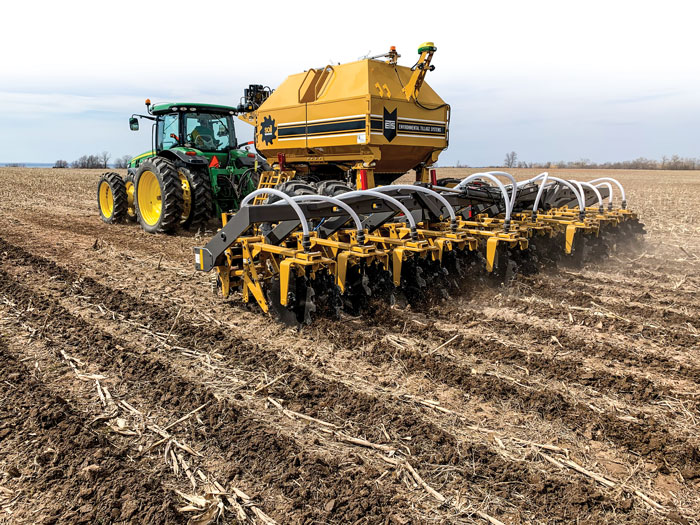 FIELD WORK. Mike Pribyl uses an ETS Soil Warrior for custom strip-till in northeast Wisconsin. He started with this 12-row unit in spring of 2020 and added on 4 rows in August 2020 to make it a 16-row unit.

For Pribyl, who’s married and has two young boys, strip-tilling allows him to finish his days earlier and be home in time to help put the kids to bed.

“It’s not only about the benefits for the operation from a financial and conservation standpoint, but this is about people, too,” Pribyl says.

Last year, Pribyl invested in a new John Deere 1775NT planter to use for their operation. It features ExactEmerge row units that can handle high speeds, hydraulic down force, pneumatic row cleaners and closing wheels, and is fully variable rate ready. They’ve had excellent success with Dawn Curvetine closing wheels, which are Pribyl’s general recommendation for a closing wheel system.

He estimates that 90% of the fields they planted over the past year have been no-till or strip-till, a figure in line with his goal to only do conventional tillage when it’s absolutely necessary.

Moving forward, Pribyl envisions strip-till as a big part of his custom business and a cost-effective solution for customers. He currently sidedresses heavy when the corn gets to the V4-V6 stages, typically applying 30-40 gallons per acre of 32% nitrogen (N). In more recent years, he’s added sulfur to the mix to reduce the rate to 28-0-0 plus 5 sulfur. By utilizing strip-till, he thinks he could start with environmentally safe nitrogen in the spring before planting and later sidedress 20 gallons to the acre of 32-0-0 (or 28-0-0) with 5 sulfur.

“We’re hoping that we can eliminate some passes out there,” Pribyl says. “I believe anytime that we’re putting down 100 units or more of N at one time, we’re throwing some money out the window. We’d rather spoon feed that crop and get the most ROI from it as we can.”

“No-till isn’t for everybody — some people need that intermediate step, and that’s where strip-till comes in…” – Mike Pribyl

Northeast Wisconsin has a lot of dairy farms, and most growers produce corn silage. Spreading manure for these large dairies is expensive, and it gets more costly farther away from the farm.

Soil fertility in northeast Wisconsin varies widely on a field-by-field basis. Pribyl says some fields have as much as 400 ppm potassium (K), while others have less than 50 ppm. He recalls a spring strip-till pass where he applied a starter mix at 300 pounds to the acre of 2/3 potash and 1/3 diamonnium phosphate (DAP). It was approximately 6-15-40. He then applied a starter with the planter 2x2 and a bit of in-furrow application, but he never got around to sidedressing the field. But when he looked at the harvest data, yields were within 15% and starch in the silage was very consistent with similar fields that had been sidedressed.

“We’re not looking to totally eliminate the sidedress pass, but we’re really looking to spread out those units better,” Pribyl says. “How do we not spend any more money on product, but we get more return?”

Operating for effectiveness, rather than efficiency, factors into Pribyl’s pricing for custom work. He charges $25-35 per acre for planting and $35-50 per acre for strip-till, depending on the scope of the job.

“We tell guys straight out, we are not the cheapest, but we are going to strive to be the best for you,” Pribyl says. “People get sticker shock saying, ‘$50 an acre? That’s a lot. I might as well just work the ground up.’ But we’re combining four passes into one. When we look at the cost of field prep in a conventional till system in Wisconsin and throughout the Midwest, you’re talking anywhere from $65-80 bucks an acre, depending on how many passes.”

Many customers like the package deals Pribyl offers, which include making the strip and planting. They also offer discounts on seed and fertilizer if purchased through their business.

To see how the economics of a custom strip-till operation pencils out, visit www.StripTillFarmer.com/NumberCrunch.

Pribyl sees specialization happening all around him, and he aims to be a specialized solution for his customers, too.

“A lot of the dairy farmers in our area, to their credit, are masters of the dairy industry,” Pribyl says. “Sometimes they need a little help on the cropping side, and that’s hopefully where we can fit in.”

The impact of Petersen and Pribyl’s efforts to introduce conservation practices to northeast Wisconsin is evident. Aerial images at Petersen’s office show the stark difference in ground cover and conservation practices over the past 10 years. In the 2010s, there was almost no cover over winter other than standard winter wheat and alfalfa. Today, the region has significantly better off-season coverage.

Conservation practices also increased biology in the region. Petersen says diversified fields had 50-60 species of plants, wildlife, pollinators and soil insects in a recent count, while traditional fields had just 6-7.

He’s amazed at how quickly mindsets can shift and how much more open producers have become to trying new methods of farming. A farmer who completely dismissed Petersen at his first demo has since become one of their business’s biggest proponents.

“I was the first person to tell you that you’ve got to work that ground in order to get good stand establishment,” Pribyl says. “And I’ll be the first one to eat crow on it, too, because we don’t have to do that. We’ve got a lot of really knowledgeable people out there and a lot of people who have seen that we can do these things differently.”

As they’ve proved, it just takes a single willing farmer to spark a movement.

“We’ve had quite a few local farmers come here and want to check out the equipment because they’re looking to learn something or adapt their existing equipment,” Petersen says. “Curiosity eventually leads to action.”