Southern California grower Tom Barcellos experienced a “blessing in disguise” when a tractor breakdown at planting time pushed him to switch from conventional tillage to no-till and later to strip-till.

Pictured Above: PLANTING COMPANIONS. Tom Barcellos runs an 8- and 10-row Orthman 1tRIPr for strip-till field preparation ahead of his John Deere 1770 MaxEmerge planters in Tulare County, Calif. Barcellos Farms was a leader in conservation tillage as growers in the area switched from grain crops to silage corn for local dairy demand.

Until 2000, Tom Barcellos was a conventional farmer like all of his neighbors in Tulare County in south-central California. He was the first to move away from the plow, and now he estimates 60% of corn production in the area is grown under conservation tillage — much of it by strip-tillers.

“When we’d double-crop corn behind winter wheat, we’d be running 6 tractors in the spring, knocking down irrigation levies, discing and floating the fields, running a chisel, and pulling up furrows before we’d pre-irrigate, mulch and plant,” he recalls. “It was very labor intensive, but that was the way everyone farmed in this area.”

Barcellos says in 2000 his main tractor broke down, leaving him with several smaller “support” tractors, but not enough horsepower to get all his conventional farm work done just before planting.

“To stay on schedule, I tried a John Deere 1700 no-till planter on an 80-acre field, and before I finished I stopped all the other tractors we had running and did another 320 acres,” he explains. “The following year we planted nearly 3,000 acres of corn between our own farm and the custom work we did for neighbors.

“It was early in the ‘Roundup Ready days’ and no-tilling helped us control weeds which was always challenging — since California has such stringent environmental rules and many crop protection companies just didn’t sell their products here,” he adds. “Ultimately, however, we were able to clean up our fields with glyphosate to the point we are actually using less chemical in the long run than we did farming conventionally.” 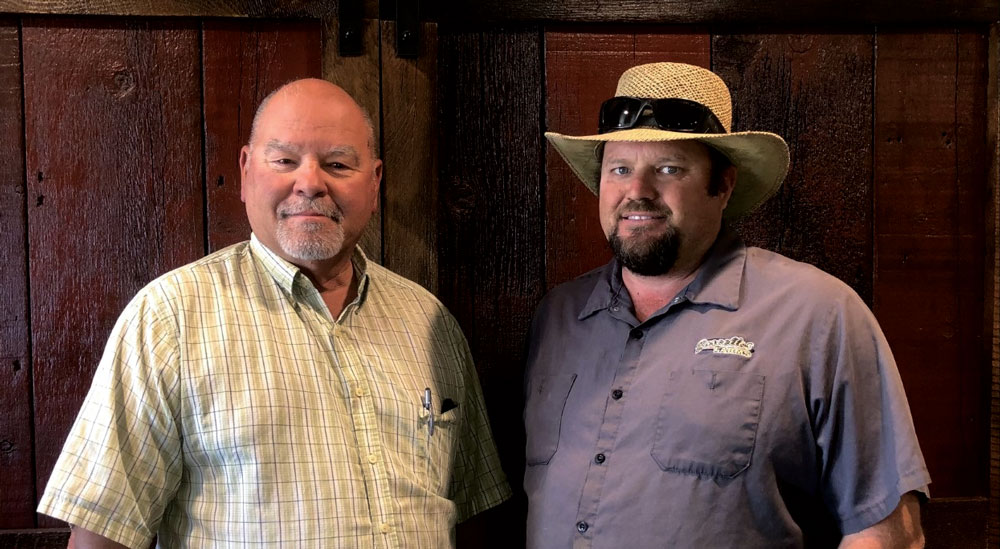 FAMILY FARM. Tom Barcellos, left, and son-in-law, Mathew, farm 1,800 acres on their own operation and manage a pair of dairies, as well as do custom work for neighbors. Tom’s wife, Felomena, and daughter, Bridget, are also instrumental in making the operation work.

Those initial two seasons of no-tilling in the area’s hot, dry climate, particularly as the afternoon sun began to bear down during planting season, caused Barcellos to pause.

“No-tilling was very beneficial to us, and we saw very little yield drag. It allowed us to get in the field 14-21 days earlier than when we were plowing. Our neighbors even saw the potential and bought planters, and that started a wholesale conversion to conservation tillage in this area.”

Even with the earlier planting window, however, as the day got hotter around noon, the ground would crust and Barcellos found he’d have to stop and wait until midnight or 2 a.m. when the humidity would come back up to start planting again. “At the same time we started no-tilling, we were exploring strip-till as a compromise between strictly no-till and our conventional farming methods. In 2002, I bought an Orthman 8-row 1tRIPr set up on a 30-inch spacing and started strip-tilling.”

Barcellos has farmed and milked cows in the same area as his family before him since going on his own in 1976 with 320 acres of rented ground. Today, he owns that 320-acre farm and milks in the same parlor as did his father and grandfather. He says strip-till has been a big factor in his growth and business success.

“Strip-till provided even more planting flexibility than no-till by eliminating the ‘night shift’ requirement to put seed in the ground,” he says

It also cut the number of field trips required to grow a crop nearly in half, and provided immediate results in improved soil tilth and the bank balance in Barcellos’ operating account.

“The first thing we noticed after switching to strip-till was the date the corn was coming out of the ground,” he says. “It was still May, and our double crop corn was already up. Under conventional tillage it was typically mid-June or later when we’d see emergence.

“The biggest thing I noticed, however, was that I had more money in the bank!,” he laughs. “We had cut our field trips in half, plus the passes through the field we were making were light-load trips, which helped us save a third of the diesel fuel we’d have burned farming conventionally.”

Barcellos says as his fields mellowed with the increased organic matter and better water infiltration behind his strip-till machines, the load on his tractors lightened each season.

“With better soil conditions we’re running the tractors at 1,600 rpm for most of our operations, where if we were pulling a chisel or a disc we’d be throttled up to 1,800-1,900 rpm.”

Today, Barcellos, who farms with his wife Felomena, and their daughter Bridget and son-in-law, Mathew Kidder, manages two dairies, 800 and 1,000-head respectively, and produces forage for those cows on their 1,800-acre irrigated operation. In addition, the family stays busy with a substantial custom business supporting other local dairies in the area with agronomic, forage-harvest and processing services.

As many dairies moved into the area over the past 25 years, and Barcellos Farms like many others expanded its own involvement in the milk business, its farming shifted to a predominantly forage-production operation.

Typically, winter wheat and triticale, along with some safflower, is double-cropped back to silage corn on the same fields for 4-6 years before being rotated to alfalfa. In years of scant water from the local irrigation district, Barcellos says some small grain fields may remain fallow until water conditions improve.

The small grains are usually planted before Thanksgiving and typically no later than mid-December, and provide yields of 18-26 tons per acre at 30% dry matter, Barcellos says.

The farm pumps highly-regulated surface water from annual runoff in the Sierra Nevada Mountains, along with lagoon water from its dairies and several groundwater wells. Annual soil samples monitor nutrient levels in the soil to prevent excessive buildup and to provide insight into annual fertilizer needs for healthy crop production.

STRIP ROTATION. Barcellos and his son-in-law, Mathew, plant their small grain and silage corn crops into alfalfa fields after the legume has produced dairy herd forage for about 4 years. Sometimes the strip-till operation leads the planter by only yards.

“If we have the water through the district, we’ll use it for about 80% of our irrigation,” Barcellos explains. “As water regulations tighten, we’re considering adopting more center-pivot sprinklers to replace our flood irrigation, and we’re looking at installing limited acres in sub-surface drip for our corn.”

He says with the advent of California’s Sustainable Groundwater Management Act (SGMA), state growers may not be able to farm all of their fields simultaneously every year.

“Center pivots are more efficient than flood irrigation, and under SGMA the corners could become our non-farmed property,” he explains.

The farm currently has limited pistachio and citrus production already watered by an underground drip system.

Tools of the Trade

Barcellos Farms currently runs a pair of Orthman 1tRIPr machines, the original, and a 10-row unit added later, both on 30-inch spacing.

“We liked the first one so much because it was bulletproof and they offer different attachment opportunities,” Barcellos explains. “Ours are equipped with a front gauge wheel with a blade to slice open the ground and a fertilizer shank runs behind that blade. We sometimes use that system on custom fields, but our own fertilizer is all put on up-front with the planter.

Behind the fertilizer shank, a pair of wavy coulters cut a strip 6-7 inches wide, followed by a spider combination wheel. The row-unit only raises a furrow about 1-2 inches, he says. “After that, we pre-water and then come back with a no-till planter.”

Barcellos says building strips and planting is far more efficient than the half-dozen trips his conventional farming required each spring.

“We make a third pass with in-season fertilizer when the corn is about 18-20 inches tall,” he explains. “Of course, we’re in the field throughout the season with the sprayer, but you have to do that regardless of how you farm the soil, so I don’t count those trips. The final production pass is with the harvester.”

Planting chores are shared between a pair of three-point-mount John Deere 1700 MaxEmerge planters, one an 8-row and the other 10, both following the farm’s 30-inch spacing. Both are equipped with coulters on the front with fertilizer units on the same bar and hydraulic drive pump.

Because of our custom farming, we have a lot of county roads to travel and bridges to cross, so the tractor-mount planters make more sense for us,” Barcellos explains.

“We use Demco tanks on the tractor and a Raven 440ES controller — which can be transferred between the strip-tiller, a side-dress bar, or a spray rig — for at-planting fertilizer applications,” he says.

“We generally knife in 20 gallons per acre of a potent blend of UAN 32% base nitrogen along with micronutrients and guano up front in a 2-by-2-inch application. That usually gets us well past traditional sidedress plant development timing. Because we use our dairy lagoon water when we can, we work closely with crop consultants to make sure we don’t over-apply nutrients throughout the season.”

“The biggest thing I noticed, however, was I had more money in the bank…”

The farm’s all-green fleet of farm equipment runs on Deere’s GreenStar RTK auto-guidance, with the exception of several Trimble lightbars on some of the smaller light-duty tractors.

Barcellos says strip-till has not diminished his yields from conventional farming standards, and, in some cases, he’s seen improvements.

“We’ve worked with DeKalb for a long time and have done corn variety trials on our farm for 45 years,” he explains. “In one of those trials we produced a 47-ton corn crop behind alfalfa in a strip-tilled field on 25 acres — not just a research plot. Our overall yield tonnages average in the mid-to-high 30s.”

Through the years, Barcellos says he’s consistently seen improvements in water infiltration on land he has strip-tilled, along with darker soils from increased soil organic matter — particularly on his own place where he applies dairy waste as part of his nutrient menu.

“Because we’re not tearing down the root zones across the entire field we get better water infiltration, and the strips provide a much more uniform, plant-friendly, mellow soil for young seedlings.

“We can see it in the soil as we build strips,” he says. “It turns easier, doesn’t clod up and stays mellow. You can see the roots in it. Also, the equipment pulls easier over the years. Strip-tilling is just more forgiving than conventional or strict no-till.”