Building healthy soil is a journey. Each grower is on their own journey, and that means an individual path with choices of how to improve your soil. Joe Breker, a grower from Havana, N.D., has found that using bio strip-till — a system in which specific cover crops are seeded in strips as a replacement for doing an actual strip-till pass —  has helped his cash crops emerge earlier while managing moisture and improving the grazing potential of the cover crops.

Breker says before this new rotation he was leaving the soil idle too often. Although residue was present, the soil biology was not being fed.

“My brother and I both thought that one of the ways we could advance no-till corn was to do some fertilizer placement, maybe do some residue management in the process, darken up a little strip,” he says.

So, they tried strip-till, placing fertilizer in the strips, which resulted in incremental yield increases in the cool, heavy North Dakota soils. Breker was also getting his corn planted and emerging a little earlier while providing nutrient placement.

“What I wasn’t doing, and I hadn’t realized yet, was managing the moisture,” he says. “Strip-till was not doing that for me.”

Adding Plants to the System

In the late 1990s, no-till legend Dwayne Beck reminded Breker that he needed more plants in his cropping system. So, he tried out seed from 20 different types of cover crops, seeding them in strips across a wheat field to evaluate them.

“That fall, I selected the ones that looked like they responded the best in that wheat stubble in that 10-week window from August 1 to mid-October.” 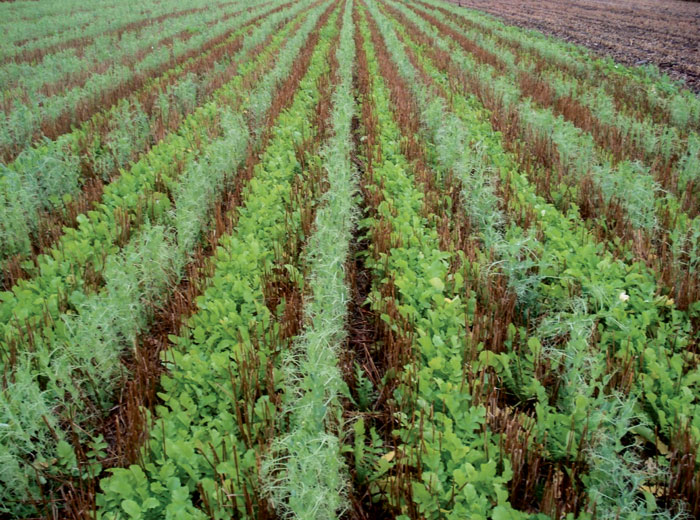 INCREASING ORGANIC MATTER. After 20 years of no-till, Breker’s organic matter levels had plateaued. After incorporating more plants into the system with bio strip-till, periodic soil tests showed that soil carbon was being sequestered and organic matter was increasing.

Breker says that some of the covers looked good, but some didn’t pan out all that well. Field peas impressed him the most, although Breker says he doesn’t use field peas much anymore in his cover crop mixes.

Breker realized that the soil responded well to having extra plants in the system. Moisture management was improving, in the short-term.

“You can grow a lot of biomass in 8-10 weeks in North Dakota on wheat, rye, barley or cereal stubble,” he says. “The grazing potential of the additional forages was very good, as well as the trafficability of the field, just because there is something green growing on them. We were also trapping nitrogen with peas.”

Periodic soil tests showed that over the long-term, soil carbon was being stored organic matter was increasing.

“After 20 years of no-till, our organic matter level had plateaued,” Breker says. “By adding more plants, it appears that cover crops brought on a whole new level of soil carbon storage and organic matter production.”

He noted changes in the color and aggregation of the soil. The soil was also not as saturated and less compacted.

In 2005, Breker led a group of farmers in looking at how to seed cover crops more easily, which led to the first field of bio strip-till just 4 years later. This advanced method of seeding covers leaves cover crops in alternating rows — either multiple cover crop species or with a cash crop.

“It was pretty simple,” Breker says. “We got peas and radish and it couldn’t be all blended together. We were seeding the different species in different rows.”

Breker’s goal was to create a more favorable environment for planting corn or another cash crop in strips, or “zones.” Bio strip-till tended to offer the same yield advantage as regular strip-till.

The bio strip-till with peas and radish worked well for Breker, except when cattle were turned out to graze. He found that if the covers were grazed, it was not as beneficial to have plants in strips. Breker would still end up planting his cash crop into a low residue environment after grazing, regardless of which cover crop species were seeded and where they were seeded.

“One of the ways we could advance no-till corn was to do some fertilizer placement, maybe do some residue management in the process, darken up a little strip…” – Joe Breker

“I needed a system that I could use or not use cows on,” he says. “I started playing with different covers.”

To the radish, Breker added turnip, flax and fava beans in 30-inch rows. After a freeze, the field looked like it had been strip-tilled because the strips of cover crops had turned black like soil.

Breker says he gets a better seedbed that is consistent with well-managed moisture. Moisture levels also determine when covers were terminated.

“For example, this spring was very dry, so we terminated the cover crop earlier than we normally would.”

“I always try to have an overwintering cereal in there,” he says. “If it’s spring wheat, I plant some rye or winter wheat.”

Breker is a big fan of cover crops because of what they do to his soils. After injecting covers into his rotations, Breker says it was like his his worms were “on steroids.”

“They really like that old plant residue that’s nutrient rich,” he says.

He’s also tried interseeding rye, winter camelina and flax. Camelina is very small seed, so it separates out of larger seed very easily. Breker uses ground corn as a filler to mix in with the cover crop seed to keep it smaller seed like camelina in suspension when interseeding the mix into standing corn.

“If you have a multi-species mix of cover crops of different sizes, they will stay in suspension,” Breker says. “We got good establishment with the interseeder. There was a fair stand of rye and camelina out there.”

“I love flax for a number of reasons,” he says. “It’s cold tolerant. It’s got a nice, stiff stem, but doesn’t interfere with planting processes. It stands over winter, catches snow and keeps everything kind of even. It’s supposed to be great for mycorrhizae.”

He has an astute observation when it comes to high-production corn. About half the time, the corn interferes with cover crop establishment.

“When you’re aerially applying a cover crop into corn in September, you’re totally relying on Mother Nature to establish the crop,” he says. “It’s been about a 50/50 deal. Parts of the field would establish, parts wouldn’t.”

Breker says that broadcasting has also been problematic, because crickets eat the seed on the soil surface.

“If you don’t get a rain almost immediately after you apply it, your establishment is usually not all that good unless you get some seed zone contact,” he says.

Breker worked with a small manufacturer in North Dakota to build a corn planter frame.

“I didn’t have my farm set up for 60-inch rows,” Breker says. “I used my sprayer to band apply 28% fertilizer and Roundup with every third nozzle,” he says. “Every 60 inches, I put on an 80-degree nozzle. I’d get about a 20-inch band and I set up my field for planting corn on pair row 60 with the sprayer.”

Breker seeds his covers in between the wide rows using a Great Plains 3-point press drill.

“It’s worked really well,” he says. “I was putting 6 rows of covers on 7-inch spacings between every pair row of corn.”

In 2020, Breker seeded fava beans, flax, alfalfa, rye, oats and wheat between 60-inch rows of corn. He opts to rotate his covers, so he’s not seeding the same cover crop species every year.

“I thought, why not use that new planter to do my fava beans in a pair row for next year’s bio strip-till?” he asks. “Fava beans are a legume. I don’t fertilize my covers. They’ll be nice and green and really grow well because they produce their own nitrogen (N) as long as you get the right inoculant for them.”

Breker says that the inoculants that are available for peas and lentils are also supposed to work well on fava beans, but don’t. He encourages growers to do their own research on that.

Breker’s operation is only 15 miles from a 20,000-cow dairy, so he sources their separated solids and composts it through the summer.

One experiment Breker tried was changing the pair spacing of cover crops from 8-inch, 6-inch, 4-inch, 2-inch, and compared them all to single row 60-inch corn.

“I just wanted to see if there would be any difference in the corn yield,” he says. “There were some differences.”

The single 60-inch rows of corn had more sunlight hitting the ground, so cover crops were a little bigger, but all the covers established and survived well. All but the single rows yielded higher.

“I don’t know if it’s because they’re spread out a little bit or because they competed with the covers a little more and the covers didn’t get so big, so there was less biomass,” Breker says. “With this extra cover crop growing in there, I probably used up some N that I probably either need to replace or I need to work on my cover crop mix so that I’m not utilizing quite as much N in that process.”

Breker went back to the drawing board to figure out how to address his N needs more efficiently. He decided to use the Conceal system from Precision Planting.

Using bio strip-till has allowed Breker to establish a seedbed that he finds easy to work with and ready to go when it’s time to plant corn. 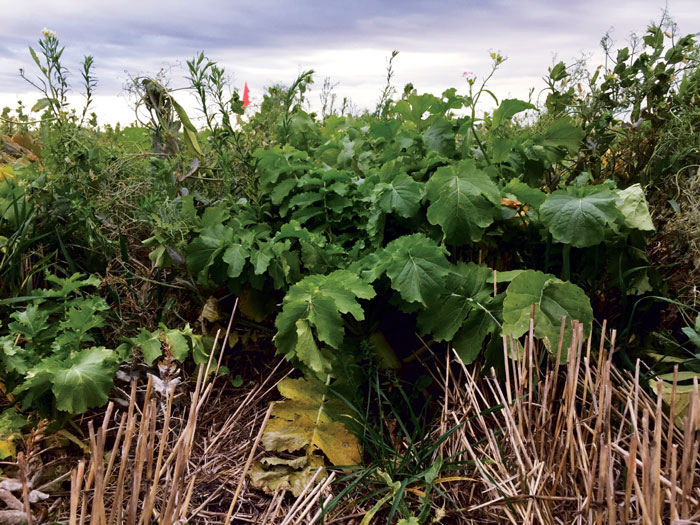 This spring, for every 6 rows he seeded, 4 were a cover crop mix of oats, rye, flax and alfalfa.

“I can tell you that covers work in this system,” Breker says. “They establish. The whole system works well. The corn harvest was great. The corn yields were very close, perhaps 95%.”

Breker is still on his strip-till journey but is not afraid to take risks and try new cover crops or other methods to improve his yields.