5 Late-Season Soybean Diseases to Scout for in August

Soybean disease levels across Ohio have been low to moderate so far, but growers should remain vigilant in their scouting efforts. August scouting can guide future variety, fungicide or seed treatment selections, so it is important to identify and record any of the following mid to late season soybean diseases. Sudden death syndrome (SDS) will first appear as yellowing between leaf veins that eventually becomes necrotic while the leaf veins remain green. Foliar symptoms are a result of the toxin produced by the fungus Fusarium virguliforme following early season infection of soybean roots. Foliar symptoms of brown stem rot (BSR) can be confused for SDS. Distinguish the difference between the two soybean diseases by splitting the stems lengthwise. The center of the stem or pith will be white for SDS and brown for BSR. SDS is likely to first appear in fields with soil compaction or history of soybean cyst nematode (SCN) infection. 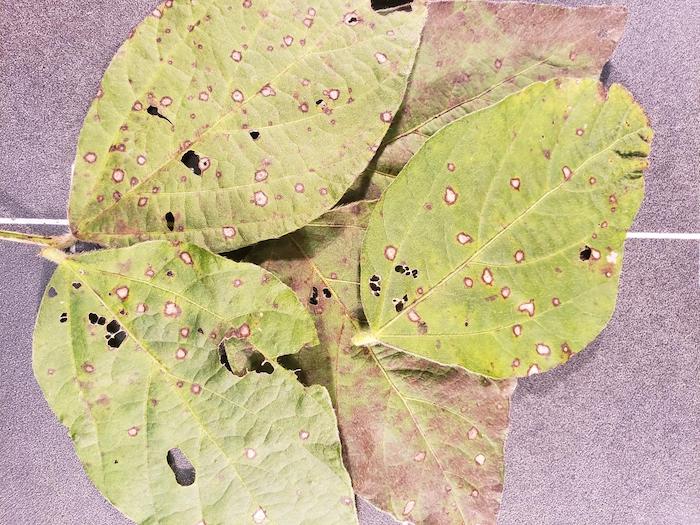 Warm, humid weather favors frogeye leaf spot development, but keep in mind visible symptoms will not appear until about 2 weeks after infection. Younger leaves are more susceptible; therefore, we recommend scouting for frogeye leaf spot in the middle to upper part of the soybean canopy. Look for small dark lesions that will grow and become gray to light brown with dark, red-brown margins. With a magnifying hand lens, diagnostic fungal structures (conidiophores and conidia) that resemble whiskers can be observed. Herbicide damage can sometime produce similar symptoms, but these lesions will not present fungal structures. 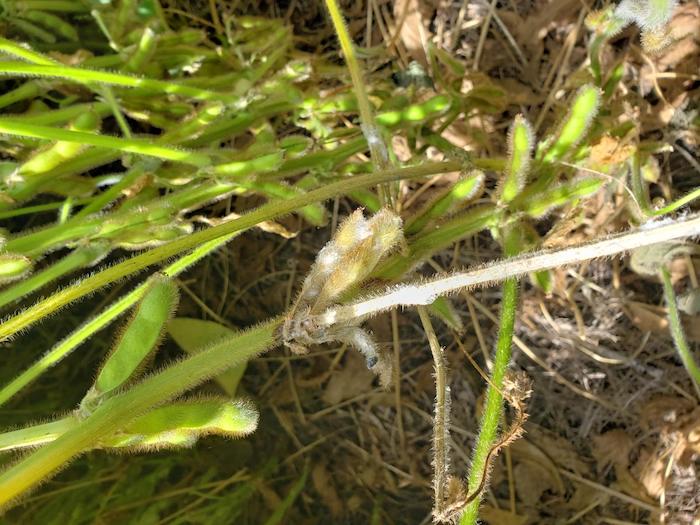 Target early scouting (R3 to R6) to fields with a history of sclerotinia stem rot or white mold. Varieties with greater than 20% disease incidence should be avoided at these locations in the future. White mold is caused by the fungus Sclerotinia sclerotiorum and is recognized by white, fluffy growth on soybean stems. You may also notice what appears to be rat droppings on the soybean plant, which are the fungus’ survival structure called sclerotia. A tell-tale white mold symptom is wilted, dead leaves that will remain attached to the stem at the end of the growing season.

Thought phytophthora root and stem rot was only an early season headache? Think again. This disease can occur throughout the growing season in susceptible varieties that have experienced recent flooding. Target scouting to fields with poor drainage 1-2 weeks after a heavy rain. Early symptoms include wilting and yellowing leaves. Eventually, a chocolate brown lesion will form, starting below ground to almost mid-height. Roots of infected plants will be discolored.

Unfortunately, soybean cyst nematode (SCN) can cause significant yield reduction with no aboveground visible symptoms. In other words, over 30% yield reduction can take place in SCN infested fields and soybean will look healthy.

So how do we scout for a disease that we can’t see? Active management of SCN begins by knowing if you have the problem. While plants may look healthy in SCN infested fields, the roots will not lie. Checking roots for SCN can be done 5-6 months after planting and throughout September. SCN can interact with biotic and abiotic stressors and compound their symptoms. For example, a field with potassium deficiency and SCN will show more severe marginal yellowing in soybean leaves than if that field was not infested with SCN. Amending potassium deficiency will reduce the symptoms, but not the SCN levels. There is also evidence that SCN will cause more severe SDS symptoms in fields where the fungus and nematode are present. Growers can use these indirect symptoms (nutrient deficiency, SDS, etc.) to target areas and sample for SCN.

If SCN is detected in soybean roots, a soil sample in the fall will reveal the SCN numbers and with this information, the best management strategy to implement. The first line of defense against these diseases is selecting a resistant variety, so refer to your scouting notes when selecting varieties for the 2023 growing season.

4 Mid-Season Soybean Diseases To Watch Out For