Get to the Root of Cover Crop ROI by Asking Questions

By Jack Zemlicka posted on November 8, 2018 | Posted in Cover Crops

It’s no secret that cover crops have become a popular pairing with strip-till systems, and we’ve seen that reflected in our annual benchmark study analysis. On average, more than 54% of strip-tillers say they utilize cover crops from 2014-18.

But that doesn’t mean there aren’t plenty of questions about how to most effectively and affordably integrate them into a strip-till system. Selecting varieties, seeding methods and timing are all factors which will impact the success of a cover crop. 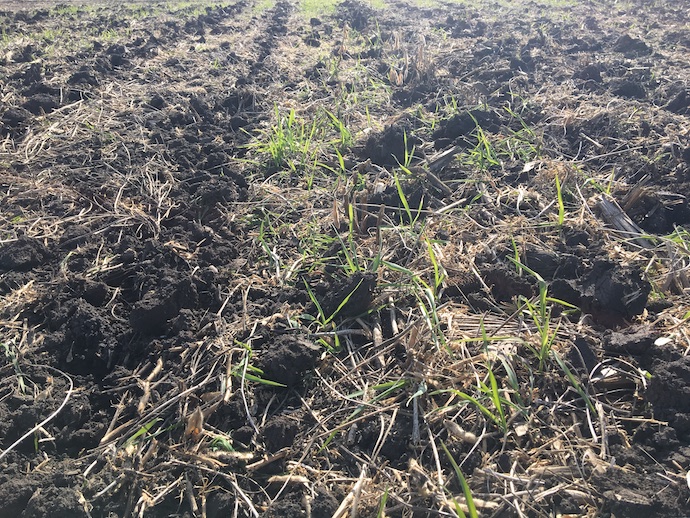 Visiting with strip-tillers in southeastern Minnesota who were wrapping up fall harvest, they had mixed reviews of cover crop performance in their respective operations. Ted Frank, who strip-tills about 1,100 acres of corn and soybeans near Dexter, Minn., seeded a mix of cereal rye, radishes and oats onto about 300 soybean acres this fall.

He hired an operator to interseed about two-thirds of the acres when the soybean plants began dropping leaves and then had the other one-third aerial applied. Frank planned to fall strip-till into the established cover and is hopeful there will be a lasting benefit in the spring.

However, he acknowledges that in 5 years of cover crop experimentation, he’s still searching for consistency. How to get good stand establishment and enough growth to make it worthwhile were two questions Frank hopes to get answered and help unlock ROI with cover crops.

Morristown, Minn., strip-tiller Brad Spinler is also in the same camp, also experimenting with interseeding with a Hiniker cultivator and blower, with rotary hoes to incorporate the seed, but has run into challenges with getting covers established.

One of the hurdles, he says, was “chemical carryover” from his cash crop having a negative impact on cover crop germination. A late harvest and lack of opportunity didn’t allow Spinler to get a cover crop seeded in 2018, and he’s hoping to dig deeper into the payback during the coming months.

While there are cover crop skeptics — some more vocal than others — there are those who have tried, failed and then learned from experimentation. Having had the pleasure of sitting face-to-face with those two Minnesota farmers, I listened to them explain their challenges, but more importantly, ask their questions.

What questions would you like to have answered about cover cropping to improve implementation in your strip-till system? Share your thoughts with me at jzemlicka@lessitermedia.com or at 262-777-2441.

Jack Zemlicka is the Managing Editor for Strip-Till Farmer. Since he joined Lessiter Publications' Ag Division in 2012, he has covered precision farming practices, products and trends. He also serves as managing editor of Precision Farming Dealer, and technology editor of Farm Equipment and No-Till Farmer.

Realizing the ROI of Cover Crops as a Soil Health Stimulant

Realizing the ROI of Cover Crops as a Soil Health Stimulant