EQUIPMENT UPGRADE. Pictured Above: Mineral, Ill., farmer Rick Childs farms 1400 acres of corn on corn and soybeans. About 15 years ago he switched from conventional tillage to strip-till. Recently, he has struggled with residue management on high-yield continuous corn, prompting him to upgrade from and old 12-row Progressive anhydrous bar to a 12-row Harvest International toolbar equipped with Yetter Maverick HR Plus units and a Raven NH3 cooler. Photo courtesy of Yetter Co.

When he moved to strip-till nearly 15 years ago, Rick Childs wanted a simpler, more efficient way to cover his 1,400 acres of corn-on-corn and soybeans.

As a the sole owner and operator on his farm in Mineral, Ill., Childs had grown tired of the toll conventional-tillage practices took on himself and his equipment.

“Strip-tilling has simplified my operation. I don’t have to have a lot of big, expensive, high-horsepower equipment around, and I don’t put many hours on the tractor,” he says. “I like to make fall strips and not touch them afterward. I don’t have a lot of help, so if I can get those fall strips made, all I have to do it spray and plant in the spring.”

Moving to strip-tilled corn and no-tilled soybeans, Childs cut his fuel consumption in half almost immediately, but some strip-till benefits have taken longer to manifest. Childs says even though he hasn’t done any soil testing, the increased soil health is obvious.

“With earthworms, we went from none, to dozens every place you dig,” says Childs. “After 15 years of strip-tilling, the soil is unbelievably mellow. I have better water infiltration, too. I don’t have ponding like I used to, and in the spring the soil in the strip is so pulverized — it’s like planting into gunpowder.”

Although a yield advantage has been difficult to quantify, he says that his strip-tilled corn is far more resilient in adverse conditions. A powerful wind event in later June last year resulted in a significant amount of downed corn during harvest, but damage was limited on Childs’ acres. 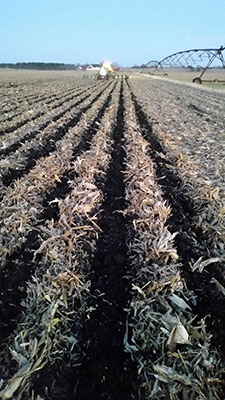 THE FALL PASS. During his fall strip-till pass last year, the new Yetter row units already helped Childs build solid strips into heavy residue. Before making the equipment upgrade, Childs was having a neighbor use a different rig to build his fall strips. Photo courtesy of Yetter Co.

“Our yields are usually very respectable. I shoot for around 250 bushels on both my irrigated and non-irrigated land, and if everything goes right I fully expect to get about that,” says Childs. “The wind event probably shaved 20 bushels off my yield, but even with that, I still ended up with a strong yield.”

For some strip-tillers, owning three strip-till units would be two too many, but not for Childs. To combat corn-on-corn residue challenges, he decided to upgrade from a 12-row Progressive anhydrous bar on 30-inch spacings to a 12-row Harvest International toolbar, equipped with Yetter Maverick HR Plus row units and a Raven NH3 anhydrous ammonia cooler.

He also recently purchased a 12-row Moore-Built toolbar with Dawn Pluribus row units that he uses specifically for spring strip-tilling when he’s unable to cover all his acreage in the fall.

Childs is getting use out of all three strip-till rigs, running the older Progressive bar on soybean stubble in fall. But for corn-on-corn conditions he plans to use the newer Yetter row units, which he began using in fall 2014.

The residue that accumulates from strip-tilled continuous corn had gotten to the point where Childs couldn’t use his Progressive bar even if he wanted to. He’d been hiring the strip building out to a neighbor with a Kuhn Krause Gladiator rig until deciding on the new purchase.

“The Yetter units build a better strip than my old Progressive could, and it has row cleaners on it to help with residue,” says Childs. “There is a lot of adjustability on it, and even though it’s not the easiest thing to adjust, you don’t have to do too much to it once you get it dialed in right.”

Although Childs was only able to strip-till 500-600 acres last fall with the new bar, he’s pleased with its performance on his corn-on-corn ground. Though he feels it pulls harder on his John Deere 8420 T tractor across the field, the added drag is necessary to build better strips.

Mineral, Ill., strip-tiller Rick Childs breaks his variable-rate fertilizer application into three different stages. In the fall, he applies 125 units per acre of anhydrous ammonia about 7-8 inches while building his strips. Phosphorous and potassium application in the strip poses a logistical issue for him so he broadcasts phosphate and potash later in the fall.

In the spring, Childs applies an additional 30 units per acre of N through the planter. He’s tried pop-up fertilizer in the past, but has been very disappointed with the results — finding that it interfered with germination. After planting, Childs sidedresses the remaining N, shooting for a total application of 180-210 units per acre.

Some years, he is unable to complete his fall strips, and when this happens he applies the full fertility program of N, P & K with his Dawn Pluribus units in the spring.

“The Progressive unit was just an anhydrous bar with rolling cutters, shanks and disc sealers on the back,” say Childs. “The Yetter setup is individual units on parallel linkage and they contour the ground better. Sometimes the shanks on the Progressive would flex, but when you drop the Yetter in, it is staying in the ground.”

Due to heavy rains and harvesting corn downed by 80 mph winds in late June last year, Childs will have to finish strip-tilling his acreage this spring. Although he prefers to build strips in fall, he’s prepared for spring strip-till.

After an excessively wet fall in 2009, Childs and a neighbor invested in the Dawn row units specifically for building strips in the spring.

“We call it plan B,” says Childs. “I’ve seen disasters running a shank machine in the spring, because it seems like conditions have to be absolutely perfect for it to work out right. With the coulter setup we don’t have that void like we would with a shank. It just fluffs the soil up and dries it out.”

“We tried a new corn head, put on some Lankota Stalk Stompers and even changed the rollers, but all the results were limited,” says Childs. “Residue is residue. I don’t care what size it is, it’s still there.”

The Stalk Stompers were helping compress the residue, but Childs found that when he sprayed in the spring, it would fluff the residue back up. With no stalks standing to catch errant residue, a gust of wind would throw it back into the strip.

He also uses Martin row cleaners with Precision Planting Air Adjust on his 16-row John Deere planter. But with 250 bushels worth of residue, Childs still wasn’t getting the results he’d hoped for. On some acreage last fall, the residue buildup was particularly severe, so Childs decided to try using a Turbo-Max vertical tillage machine from Great Plains Mfg.

“It was a bad, bad mistake,” says Childs. “I wasn’t there when I had the guy do it, and he must have sunk the rig clear up to the spools.

“Afterward, I had all this loose ground to try to strip-till and I had problems. The berm is there, but it’s inverted a little bit. I couldn’t keep the anhydrous bar from burying itself. It was ugly.” 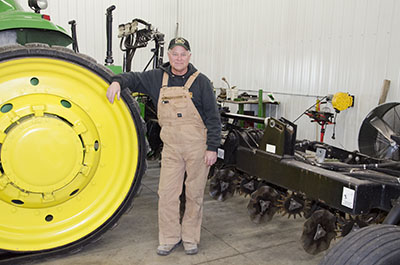 CHANGE OF PLANS. Due to heavy rains and a powerful wind event in late June, Childs wasn’t able to finish building all his strips as he’d hoped. This isn’t his ideal condition, but he is prepared for it nevertheless with his 12-row Moore-Built toolbar with Dawn Pluribus row units set specifically for strip-tilling in the fall. Childs says, in his area, he’s seen running a shank in the fall end in disaster, which is why he prefers the Dawn coulter setup for this purpose.

Childs says that using the vertical-till unit to break down and resize excessive residue has some merit, but there is a chance that it will loosen the soil too much to build good strips, so the process needs to be carefully managed.

He hopes that the new Yetter rig will be able to effectively breakdown his corn-on-corn residue, but after using a variety of equipment and strategies already, he admits that the simplest solution might be to just give the corn-on-corn a break.

“I have two fields of irrigated corn that have been corn for 9 years straight and it might just be time to give them a rest,” says Childs. “The easiest thing to do would be just to go back to a 50/50 corn-soybean rotation.”