Strip-tilling continuous corn may sound daunting to many farmers, but Stillman Valley, Ill., strip-tiller Cade Bushnell believes it’s worth the investment of time, energy and strategic planning needed to make it economically worthwhile.

“Strip-tilled corn-after-corn is profitable — and a great fit — in my farm,” says Bushnell, who no-tills soybeans and exclusively strip-tills continuous corn on his 1,300-acre operation. “My yields will be within a couple bushels or equal to my corn after soybeans. And that has happened year after year.”

For years, Bushnell exclusively no-tilled his corn, but looking to increase yield and consistency, he made the move to strip-tilled corn-on-corn in 2007, running a 12-row Dawn Pluribus coulter strip-till rig.

“The goal is to get 95% of plants to produce a whole ear, and I can get that with no-till corn after soybeans,” he says. “But I’m not building as much organic matter and I was having more trouble getting those effective plant stands in no-till corn-on-corn. Strip-tilled continuous corn allows me to hedge my bets for the best yield.”

“This is obvious, but it has to be said — seedbed starts with the combine,” Bushnell says. “I use Calmer Bt Chopper stalk rolls on my John Deere combine, and they do an excellent job reducing the length of residue that’s laying on the ground — especially in green corn, and corn where the stalks are green.”

“My most used piece of equipment is the sprayer. It’s the best scouting machine out there, because I know what’s going on in my field…”

Bushnell notes other options for sizing and spreading residue, but he prefers the chopping rolls because they confine residue to the row. “When I’m done harvesting corn, everything but the leaves and the husks are in the old corn row and not where I’m going to have to deal with it next year.”

Bushnell stresses the importance of making sure your planter is set up not only for strip-till, but for no-till conditions. “If it’s not set up for no-till and you get off the row, the yield penalty is incredibly high,” he says.

Nitrogen (N) can get “locked up” those first few years and there is a carbon penalty because of all the residue, he says. The key is keeping that residue away from the corn plant. It took about 3 years for Bushnell to start seeing N cycling back into his soil once the residue began breaking down faster and feeding the soil.

He’s had instances where the shadow line from a piece of corn residue crossed the row, stunted the corn and made it a weed. High winds have also blown residue over the row, and strip-till gives Bushnell a “second chance” to move that residue off the seedbed.

The row units on his strip-till rig and 16-row Deere 1760 no-till planter are set up nearly the same for residue management, with both featuring Dawn’s floating trash wheels and the planter also features Martin closing wheels and drag chains. Bushnell says he likes the setup because the row units move residue rather than blend it into the strip.

“I can do everything right, but if I don’t keep the residue away from the corn, I’m gambling,” he says. “I’ve had corn plants that were two collars behind because there is residue around them. In the right year, that may not make any difference in yield. But in the wrong year it could make a big difference.”

There are a lot of technology add-ons available for planters. One that Bushnell advises strip-tillers invest in when making the switch to corn-on-corn system is an automatic row shutoff or some kind of swathing.

“It’s a huge deal because you don’t end up with a mat of residue, which is extremely important,” he says. “Double-planted spots in the headlands are a disaster, in my experience with strip-till.”

Planter set-up isn’t the only thing Bushnell depends on for increased corn-on corn yield potential. He utilizes split N applications, and says in his experience, there’s no ‘one-shot wonders’ for N application.

Bushnell relies on as many as 5 applications of N in his corn-on-corn system, starting with 100 pounds per acre of ammonium sulfate (AMS) and 21 pounds of sulfur applied in spring along with variable-rate applied potassium (K) and phosphorus (P). 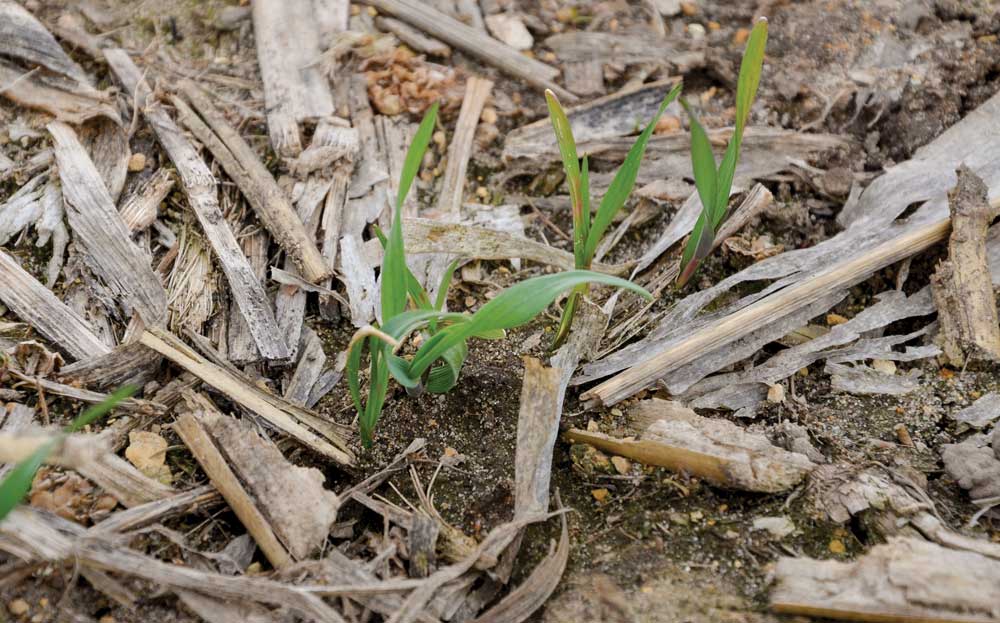 UNLOCKED N. Nitrogen can get “locked up” those first few years and there is a carbon penalty because of all the residue, Cade Bushnell says. The key is keeping that residue away from the corn plant. It took about 3 years for Bushnell to start seeing N cycling back into his soil once the residue began breaking down faster and feeding the soil.

“The herbicide is a carrier,” Bushnell says. “The reason being that if I don’t feed the microbes on the soil surface, they will rob the N from that 2-by-2-inch placement.”

“On my farm, the most used piece of equipment is the sprayer,” Bushnell says. “The sprayer covers more ground, it covers it more times, and it is as critical as the planter. It’s the best scouting machine out there, because I know what’s going on in my field. Technology and GPS only do so much. It’s also very economical.”

He typically sidedresses the balance of N when corn is between shoulder and head-high, but he may also dribble on another 5 gallons per acre with the sprayer, depending on the health of the crop.

Bushnell may also make a foliar application of N and micronutrients, using Agro-Culture Liquid Fertilizer’s ferti-Rain product if fields are saturated by rain early in the growing season. One year, several areas received 7 inches of rain when corn was about knee-high, resulting in significant N loss.

An older sprayer has done great things for Bushnell’s farm, and at a low cost. When he uses it to apply N and herbicide to his 950 acres of continuous corn, it costs Bushnell $25,600. “You need to add a sprayer to your operation if you don’t have it,” he says. “It will make your operation more successful.”

Farmers also need to consider which strip-till bar they want to purchase. According to Bushnell, part of that decision will be determined by how aggressively farmers want to till.

“Because I moved from no-till to strip-till, I don’t feel I need a lot of aggressive tillage. On my farms with poorer soil quality, I just didn’t see the benefit of going with a corn and soybean rotation in strip-till because I wasn’t growing enough organic matter with soybean residue. Nothing builds organic matter like corn.”

As far as Bushnell is concerned, the most important aspect of the strip-till bar is moving residue. He also uses it to create a bit of loose, dry soil and establish a good seedbed in spring.

“Those are the two things that make strip-tillage shine in corn-after-corn,” Bushnell says. “It gives me that second chance to move the residue, because corn hates residue next to it.”

Further managing variability, Bushnell began planting a cereal rye cover crop into a strip-tilled corn-on-corn field, which helps with residue breakdown and nutrient preservation. He typically seeds the cover into the old corn rows with his Deere drill immediately following harvest and then kills the cover once it gets about 8 inches tall. 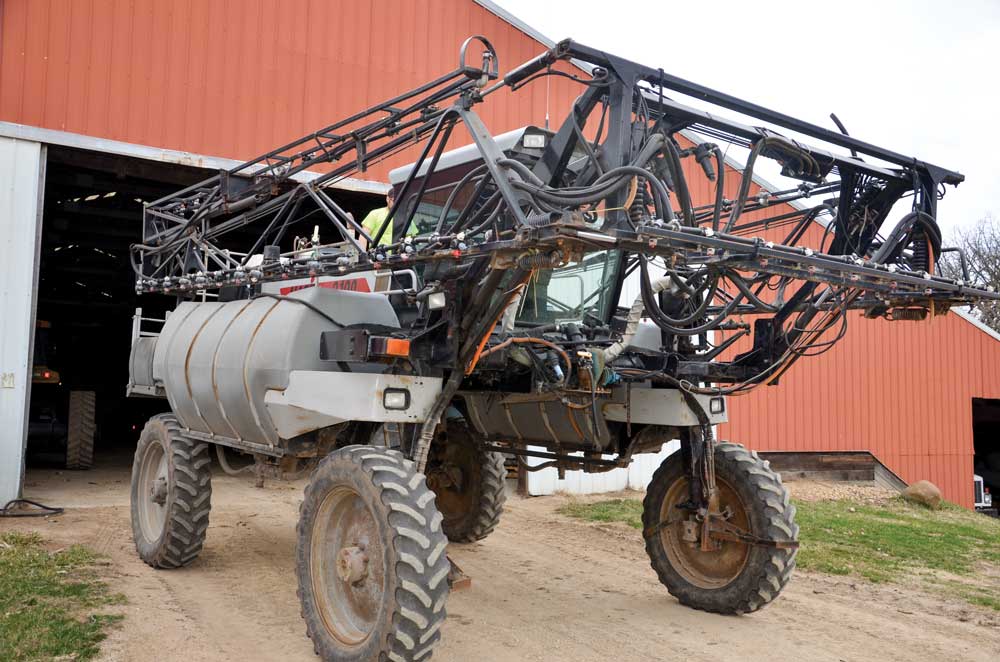 WORKHORSE MACHINE. Cade Bushnell typically applies 10 gallons per acre of 32% with an herbicide over the top using his Hagie 2100 sprayer. He typically sidedresses the balance of N when corn is between shoulder and head-high, but may also dribble on another 5 gallons per acre with the sprayer, if needed.

Bushnell has also strip-tilled right through a standing cover crop and the root mass will hold the soil together, he says. “It’s like strip-tilling into a Brillo pad.”

That cover crop helps a great deal with residue management, as well as with soil health, Bushnell says. Some of his fields had organic matter content as low as 0.7% dating back to 1962, and it’s taken nearly 50 years to boost those levels to about 3.5%.

“Cover crops tend to ramp up the soil health,” he says. “When I go into a strip-tilled corn-after-corn field in August, the only corn stalks left from the previous year are the ones that are standing. Everything that’s on the ground is gone. It’s pretty amazing.”

According to Bushnell, that makes it easy to plant into that same row again the following year. He says the key to cover crops is biomass, which means relying on cereal rye.

“The only one that I can establish and have good biomass with, once I start harvesting corn, is cereal rye,” he says. He’s been able to seed aerially with some success, but Bushnell notes that it works better in areas without an established corn stand.

Pest control is another key to a successful corn-on-corn operation, and Bushnell applies Capture LFR insecticide in-furrow with the planter.

“I didn’t see the benefit of going with a corn and soybean rotation in strip-till because I wasn’t growing enough organic matter with soybean residue. Nothing builds organic matter like corn…”

“We’ve had our issues with the Japanese beetles, not so much the adults, but the grubs,” Bushnell says. “A lot of years, I could dig and find more grubs than corn, but we’ve been able to combat that problem with our insecticide treatment.”

When he started doing more corn-after-corn, it really highlighted the need for fungicides, Bushnell says. He realized that not only was he struggling with foliar diseases, but he was having similar issues in his corn after soybeans.

He learned ways to improve the health of his corn-after-corn field, and he was able to apply those same ideas to his corn after beans. “The fungicides are probably the biggest change,” Bushnell says.

Some farmers suggested he use a lawnmower-style chopping head, but Bushnell says he doesn’t want to go that route. He prefers the snapper roller style chopping because it doesn’t redistribute the residue.

“With all that residue in the field, the loading of fungal inoculation and foliar disease inoculation in the spring is pretty high,” he says. “We just assume we’re going to have to deal with it every year. I wouldn’t let that stop me from strip-tilling continuous corn.”

Bushnell has a closing word of advice for farmers who are considering making the move to strip-tilling continuous corn.