SOIL CONSCIOUS. For the first 2 years Illinois farmer, Kevin Kennedy had his strips custom built, but in 2014 he acquired a 12-row Orthman 1tRIPr equipped with a 9-ton Montag fertilizer cart. Kennedy is careful to make sure that he gets his strips built in his clay soils in the fall and his strips in sandier, loamy soils in the spring.

Kevin Kennedy has shaken things up on his 3,200-acre farm in Walnut, Ill., over the last few years. He switched from conventional tillage to strip-tilled corn 3 years ago and did the same for soybeans last year.

“My success has been due to a combination of everything,” says Kennedy. “It’s been managing my inputs as wisely as I can and that means placing nutrients right in the root zone and controlling seed and nitrogen rates across soil types.”

Through his newfound cocktail of techniques, he’s increased application flexibility with dry fertilizer rates, seen a 20% reduction in fuel usage and is now beating the county average corn yield by 18% farm wide.

To make the most of his operational changes, Kennedy is looking at the needs of his farm at the soil level. For the first 2 years, he had his strips custom built, but last year his son acquired a 12-row Orthman 1tRIPr equipped with a 9-ton Montag dry fertilizer cart. 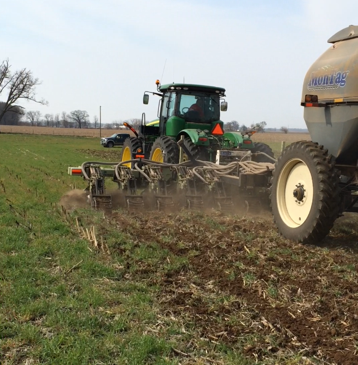 DIALING BACK RATES. Due to high fertilizer costs in 2015, Kennedy dropped his DAP and potash rates back to 125 pounds each per acre. He doesn’t think this is a sound practice over time, but he feels comfortable in his ability to manage extremely tight operating costs on some of his inputs while still maintaining full potential of yield. Photo courtesy of Kevin Kennedy.

Since Kennedy has a lot of ground to cover and variable soil types, he built a strip-till program that synchronizes with those conditions. Seeing that his tight timber, blow sands, Muscatine and Port Byron soils all respond differently to strip building at different times of the year, he’s come to understand that one size doesn’t fit all.

This staggered approach allows Kennedy a level of flexibility that was especially advantageous in 2015’s wet conditions.

“This year was a very good example of what strip-till will do for us,” says Kennedy, “When it was getting dry enough to work ground and our neighbors were working theirs, we were already planting into the strips we built in the fall. We had four or five rain outs, but even with those, we got everything planted on time.”

The attention to soil type doesn’t stop at the strips though; he tailors his fertility program as well. He runs 100% of his dry fertilizer, through his strip-till bar in both the fall and spring.

“We applied 125 pounds of both diammonium phosphate (DAP) and potash this year, but we went with a lighter rate than normal due to high fertilizer costs,” says Kennedy. “We felt better about pulling back rates because we knew that we’re putting it 100% under the plant.

“Agronomically, I don’t think that’s a sound practice over time. But, strip-tilling allows me to manage extremely tight operating costs on some of my inputs and while still giving me full yield potential.”

“Our seeding rate and N rate are based off of soil type, historical yield and green biomass index from previous years,” says Kennedy. “We aim for 8-tenths of a pound of nitrogen per bushel and that puts us anywhere from only 100 units on our sands to 190 units through our lower ground. We’ve seen a huge efficiency boost doing it this way.” 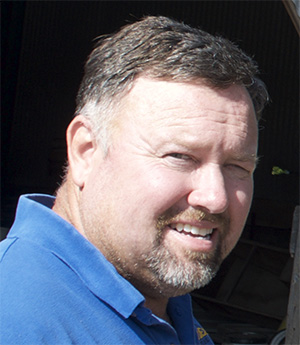 “We aim for 8-tenths of a pound of nitrogen per bushel and that puts us anywhere from only 100 units on our sands to 190 units through our lower ground. We’ve seen a huge efficiency boost doing it this way.”
— Kevin Kennedy

Since he no longer plows and his current practices have edged up his yields, Kennedy is grappling with heavy residue on his continuous corn. On some of his best performing acreage where yields close in on 260 bushels per acre, Kennedy has yet to figure out how to handle this residue solely with the strip-till bar.

Although he admits it may detract slightly from the status of “pure” strip-tiller, he has hit on a management system that has been very effective. To help size and bury residue, Kennedy runs a tillage pass with a prototype Salford I5100 vertical tillage tool on the heaviest residue before building fall strips.

“On some tighter clays, we don’t have to do any fall tillage, only strip-tilling,” says Kennedy. “But, with some of our heavy soils, we have to work it once with the vertical tillage tool, to bury the trash because it’s too much to handle.

“In that environment, this tool will leave the soil nice and black and lay it flat and then we can come out with the strip-till bar and lay the fertilizer in strips. This way, in the spring we can just roll in right away and plant.”

Kennedy says his most successful residue management strategy is using a Geringhoff corn head. For him, it makes all the difference on ground that may have otherwise had to have residue sized and buried with the vertical tillage tool.

“The corn head uses a Rota disc to make a vertical cut that opens a stalk like a tulip, it just blows it apart,” says Kennedy. “So all winter, it helps with decomposition.

“It was the biggest residue game changer for us. It didn’t matter which variety or corn hybrid we went through. I could physically see a difference in how the corn heads performed the following spring.”

Although he’s very pleased with the system he’s using now, Kennedy hopes to examine the possibility of just running a spring refreshing pass on strips to see if that is adequate to handle residue. Although he’s run a few tests with a single pass, he’s still uncertain about the difference two passes would make.

“We’re doing tests with just completely strip-till on continuous corn where we saw 252 bushel corn. We made spring strips on it and just planted,” says Kennedy. “We didn’t have good uniformity of emergence, and I think the final stands suffered a bit. However, if we could get all the strips made in the fall and come back to freshen them up in the spring it might not be as big of a problem, but right now that’s an unknown to me.”