By Ian Gronau posted on July 7, 2015 | Posted in Nutrient Management

Many farmers recovering from a punishing rainy season may be starting to wonder how their nitrogen programs fared. Three strip-tillers share their experience-based best practices.

FLEXIBLE FERTILITY. Some farmers in the Midwest may be facing nitrogen loss this year from heavy rains. But strip-tillers are at an inherent advantage when it comes to placing their nitrogen. That said, designing a flexible program that includes various applications can help protect against season volatility.

In some respects, strip-tillers who band fertilizer in their strips enjoy a distinct advantage in terms of nitrogen (N) management over other tillage practices. After an exceptionally rainy spring, many farmers throughout the country may be starting to worry about N that may have washed away.

Parts of the Midwest were drenched by heavy rains, but soil conditions vary just as much as climate does throughout the Corn Belt, so Strip-till Farmer spoke with high-yielding strip-tillers in Indiana, Nebraska and Illinois, to find out how they manage N applications to compensate for unpredictable weather patterns, maximize nutrient uptake and improve yields.

Frankfort, Ind., farmer Jerry Neidlinger and his son Jeremy have been strip-tilling 500 acres of corn on their 1,100-acre operation since 2007. Even though Jerry suspects that heavy spring rains may negatively impact his 2015 corn yield totals, he has confidence in the N program he’s developed. By using a few simple strategies fitted to his soil type and climate, he’s able to keep his farm average up around 234 bushels-per-acre.

Neidlinger staggers both his N application and strip-tilling practices. In the fall, he strip-tills about half of his acreage, banding anhydrous ammonia 8 inches deep through his 12-row Case IH/DMI strip-till bar on 30-inch spacings. For corn-on-corn, he shoots for a rate of 200 pounds of N and 165 pounds per acre for corn following soybeans.

In early spring, he comes back to finish the remainder of his acreage. Neidlinger says that concerns about N leaching can be sidestepped by taking a few precautions.

“To make sure the nitrogen stays put in the fall, I don’t start strip-tilling until the temperature hits 50 degrees and stays at or below that,” he says. “Also, in the fall I make sure to use N-Serve stabilizer to prevent movement. I’ll use it in the spring too if I’m able to get out early enough, but only up until the April 1.”

He admits that this strategy may not work as well for a farmer with a different soil type, but much of his highest yielding corn is pulled from the acreage he prepares in the fall.

“A lot of people will tell you that sidedressing will give you better yields, but for us and our soil types, this is the best way,” says Neidlinger. “We have heavy black soil throughout, and it has a tendency to hold onto the anhydrous a little better on it’s own.”

With additional N applied at planting and sidedressing, as needed, Neidlinger builds some flexibility into his program to accommodate for extremely wet years. When planting with his Case IH 1250, he applies about 8 gallons per acre of Nature’s Release starter fertilizer in 2-by-2 inch placement. As for sidedressing, he often bases rates off his 4-year cycle of soil tests.

“With corn-on-corn, we’ll usually put 100-150 pounds of MAP (monoammonium phosphate) down, depending on what my soil tests show,” says Neidlinger. “This year has been different. If we have an early wet spring, we’ll come back and sidedress some 28% if we feel like we’ve had a significant loss. We haven’t had to do a lot of that, but we try to do a few early tissue tests in wet springs to find out what we need.” 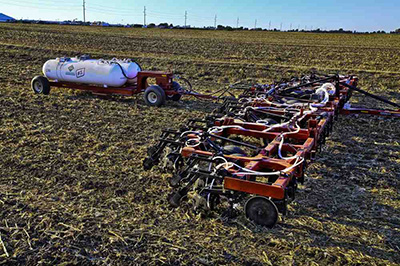 PLANNING AROUND SOIL. Some soil types are more suiting to holding nitrogen better than others. For instance, heavy black soil may be more likely to stand up to continuous rain better than light sandy soils in terms of nitrogen retention. This is an important consideration when designing a fertility program.

Matthew Beckman of Elgin, Neb., has been strip-tilling 1,200 acres of corn on his 4,000-acre family farm with his dad, brothers and uncle for about 6 years. Even though Nebraskan farmers usually have to contend with drier springs on average, they weren’t spared this year from heavier rains in 2015. However, Beckman believes maintaining flexibility above a baseline strategy is the best route to consistently high yields.

“If it looks like we might need a shot of N earlier in the spring, we’re not afraid to go spread some extra urea,” says Beckman. “We have a baseline program, but if weather dictates that we need to deviate from that in the spring, we can. We have options through our local co-op — they have a good selection of fertilizer and equipment that we can get at in minute’s notice.”

In the spring, Beckman builds strips 8 inches deep and 7 inches wide with a 12-row Twin Diamond Strip Cat, and applies 130 pounds per acre of N in the form of anhydrous ammonia. He also applies 175 pounds of a liquid blend.

Beckman uses fertigation for a final follow-up application, which proves to be a perfect time to make up for nitrogen suspected to have been lost. After wet springs, he looks for early yellowing or wilting to gauge the need for adding N.

“Fertigation is part of our plan regardless if it’s wet or not, but it’s a good time to add N if tissue testing has shown a loss,” says Beckmen. “It’s usually just a shot —anywhere from 40-60 more pounds of the 28-0-0-5 blend.”

Generally though, Beckmen feels that switching to strip-till has helped his operation weather seasonal volatility through more accurate fertilizer placement. Although other factors, like genetics, are at play, the practice has helped him boost yields to around a consistent 240 bushels-per-acre.

“We have some poor areas in our field, like all of our calcareous yellow clay hills, but banding the fertilizer seems like it gives them a boost,” says Beckman. “Our bottom end of yield has come up a long way and our top end has maintained and even increased in some spots. We’re getting maybe 10-30 bushels better in most spots since adopting strip-till.”

On his farm in Beardstown, Ill., David Wankel has been strip-tilling 2,200 acres of corn and 200 acres of soybeans for the last 3 years. Originally, he started the practice in the 90s, but temporarily abandoned it because of issues with fertilizer placement.

“In light to moderate drought situations, our heavy river bottom soils were suffering,” says Wankel. “The roots weren’t able to get out of the strip to pick up the potassium.

“I stopped because I didn’t think it was going to work, but when it became possible to place dry fertilizer in the strip where I knew the crop could get to it no matter what the conditions were, I picked it back up.”

Wankel builds his strips in the fall, applying a blanket rate of 130 pounds per acre of diammonium phosphate (DAP) with his 12-row Kuhn-Krause Gladiator on 30-inch spacings. He places the DAP at a depth of 4 inches, but he builds the strip about 12 inches deep and 8 inches wide — a experiment he started this year.

“This year we went from 8 inches down to 12,” says Wankel. “We did it because some of the strips in our heavy traffic areas were ending up as depressions. The knife would just slip through without much disturbance.

“It might throw a chunk of soil here or there, but it would be out past where the closing disk could get ahold of it so it would leave a low spot. At 12 inches deep, we are tending to lift the profile better, and build a better strip.”

While the majority of Wankel’s N is applied at sidedress, he puts a significant amount down at planting as well. He applies 40 pounds per acre of 10-34-0 in-furrow with Keeton seed firmers and dribbles another 30 pounds per acre of N in the form of 28% and some triazole — a fungicide — behind the closing wheels.

To finish out his program, he sidedresses 200 pounds per acre of N in the form of anhydrous ammonia. This year, Wankel will evaluate tissue tests his crop consultant has been doing with a SPAD chlorophyll meter for guidance on N deficiency. However, he isn’t expecting significant loss and does the analysis as more of a safety measure.

“Our application of ammonia at sidedress is very stable,” says Wankel. “The bacteria hasn’t had a chance to break it down into nitrates yet, which is leachable. If I’d put down a ton of liquid 28%, I would be more concerned because a lot of it would have already been in the form of nitrates.”

He has seen some yellowing in his corn, but he attributes this more to a lack in oxygen to the roots and ponding than N loss. Keeping around a 238 bushel-per-acre yield, as he does, isn’t easy in extremely wet years, but Wankel says staying vigilant on signs of N deficiency will help strip-tillers respond quickly.

“With N loss, we see wilting and yellowing,” says Wankel. “The crops will start dropping their leaves from the bottom up, and if I see them doing that with more than two regular leaves, I know it’s time to do something about it.”