Starting Out in Strip-Till

BRINGING SOILS AROUND. At first, Lance Petersen had to fight the sandy loam soils on his Minnesota farm into accepting the strip-till system. Often this resulted in him having to use a rotary harrow in wet spring to help the soil dry out. Over the course of several years though, he’s seen his soils mellow, and existing root structures make his farm more strip-till friendly.

Lance Petersen and his father Chuck have only been strip-tilling on their 750 acre farm in Rush City, Minn., since 2011, but they’ve already seen the practice weather the best and worst conditions they can imagine.

The 2014 growing season was so prohibitively wet that they had to prevent plant 2/3 of their acres. Conditions were far more favorable this year, with corn yields averaging near 190 bushels per acre in fields that usually average around 140.

“It’s been record breaking for us, a once in a lifetime type year from what we can tell,” says Petersen. “Mother Nature was favorable, but as for how much of the credit belongs to strip-till — I’d say that the increased concentration of nutrients in the root zone really allowed us to make the best of already great conditions.”

Although Petersen took to strip-till enthusiastically, fighting wet, sandy loam soils in early spring has made staying flexible important. Being a purely spring strip-tiller, he is often concerned that wet conditions will keep him out of the field too long.

As he transitioned into strip-till, he often had to return to tillage, albeit in a reduced capacity, to ensure the soil was dry enough to plant into.

“We always had to have a plan B for our climate,” Petersen says. “In the past, if we couldn’t get in the field to build strips soon enough we’d do some light vertical tillage with a rotary harrow to dry out the soil,”

After about 3 years of constantly adjusting to conditions, Petersen started to find that his soils were becoming more acclimated to strip-till. Even with a very difficult 2014 behind him, he’s starting, in his words, to take the training wheels off.

“We’ve built up some better soil structure now, and it’s more mellow and existing root systems are still in place,” says Petersen. “Over time, strip-till has made the soil more pliable and workable. In the past, the tilled soils kept needing more tillage, but now the soil seems more natural and doesn’t need to be mechanically churned up.” 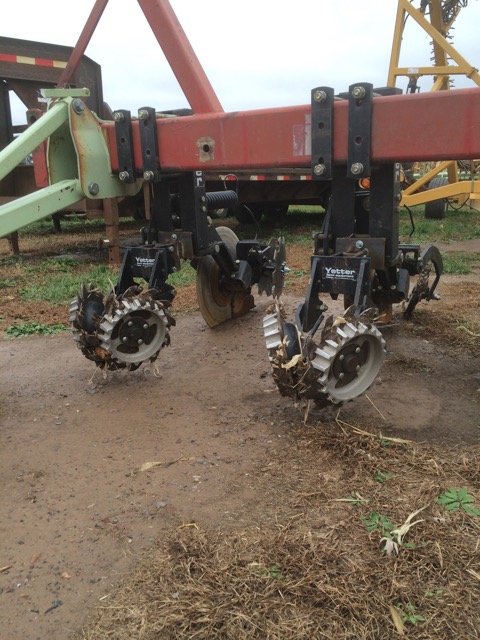 PROTOTYPING. To act as a backup bar in springs that are too wet for his 12-row Dawn Pluribus unit, Petersen has added four Yetter Magnum row units onto his fertilizer coulter. He also built his own faceplates, added floating row-cleaners on the front and berming disks on the back.

Although Petersen sees a future in which he won’t have to drag the rotary harrow across the field, cold and wet early springs are a geographical reality he’ll still have to face. Because of this, he may not always be able to build strips with his 12-row Dawn Pluribus unit in enough advance of planting.

Currently, he runs 160-200 pounds per acre of 9-23-30 (a blend of diammonium phosphate and potash) through his strip-till rig and Montag air cart. He also dribbles and extra 10 gallons per acre of 28% nitrogen (N) at planting and sidedresses a mix of 200 pounds of urea and 75 pounds of ammonium sulfate also through the Montag.

Since increased fertilizer placement in the root zone is what initially drew Petersen to strip-till, he doesn’t want a late start to compromise his whole program. Instead of using the rotary harrow in the future, Petersen has designed and is working to improve an alternative application bar that will give him the same opportunity for accurate placement, but won’t run as aggressively as the Pluribus.

“We’ve been working on a prototype of a fertilizer coulter and it’s the same one we use for sidedressing,” says Petersen. “We put four Yetter Magnum row units on the cultivator bar and made our own faceplates. It has floating row-cleaners on the front of it and some berming disks on the back.

“We’ve also been working with Nitrogen Sealing Systems who manufactures closing coulters for liquid applicators to make replacements for the Yetter closing wheels so we can an cover up 28% N.”

Petersen has already run a series of promising tests with the new bar and is planning on building it out to a full 12 rows by the spring of 2016.

“It sort of works as a form of strip-till without any real tillage,” says Petersen. “It clears the residue off, bands the fertilizer 4 inches off to the side of where we want to plant and then tosses a little bit of that top 1 inch of dirt around, and stirs it up to help it dry out for planting. If we can get it to work right, it’ll be perfect for the years where the soil is taking too long to dry out.”

Petersen also says converting it back to a sidedress rig would be as simple as pinning up the row cleaners and putting the closing wheels back on. This way it’d become one farm implement that serves several purposes. 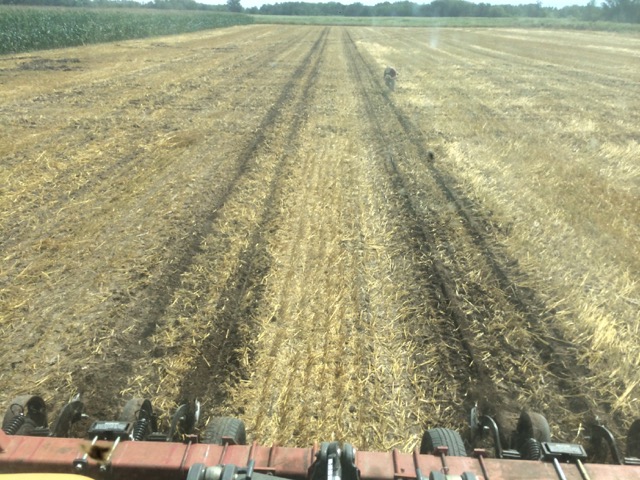 TEST RUNS. Petersen has run a few promising tests with his 4-row prototype bar. He’s hoping that it can be used to clears the residue off the strip, bands the fertilizer 4 inches off to the side of where he is going to plant and lightly agitate the soil to help it dry out. With success, he will use it in place of his more aggressive Pluribus bar in years that are too wet.

Another addition Petersen is looking to make in his strip-till system is broader use of cover crops. However, in his area, cover crops can be tricky to seed.

“It’s nice to have the cover in there, but because we do so much corn-on-corn we don’t quite know how to accomplish that,” he says. “We’ve looked at the idea of maybe going with a small grain, like spring wheat.

“Some guys in our area seed them closer to tassel, but we start running out of growing season at that point. Others have been seeding covers at V8 and hoping to get something green, and then once they take the corn off it can start greening up again. But it’s just a bit tricky with our timeframe.”

However, one of the advantages to having a bad year for planting is a chance to experiment. In 2014 Petersen took the opportunity to incorporate cover crops to see how they would fit into his system.

“We had about 1/3 corn on corn, 1/3 cover crops and 1/3 prevent plant,” he explains. “It was a terrible rotation that I hope we never have again, but it did give us a change to try some things.

Half of the cover crops he seeded were a mix of wheat, clover and dwarf Essex rapeseed and the other half was a mix of barley, clover and radishes. He seeded them with an Amity air cart and worked them into the soil with the rotary harrow.

Petersen let them grow through the fall, die off naturally and come back in the spring — at which point he strip-tilled right into them. The difference in yield between the two mixes was negligible, but the difference between the cover cropped and non cover-cropped ground wasn’t.

Although 2015 yields were high across the board, the cover cropped acres saw a 10-15 bushel per acre yield advantage. Seeing those significant advantages has Petersen intent on revisiting cover crops this year despite the difficulty of seeding them in his area.