By Ian Gronau posted on March 22, 2016 | Posted in Nutrient Management

Set Up for Success: Kingman, Ind., strip-tiller Doug Davenport put a Valmar air seeder on a Salford vertical tillage tool and set it to just very lightly tickle the soil as it seeds cover crops. He immediately had excellent results, but was running right over strips while seeding because we were still making them right after harvest.

Kingman, Ind., strip-tiller Doug Davenport’s 4,000-acre operation reinforces the idea that one size does not fit all for farming. Davenport has spent many years, and plans to spend many more, figuring out, field-by-field the best management practices on his farm.

This philosophy led him to adopt strip-tillage for corn initially about 15 years ago. While about 60% of his farm has been tiled, Davenport still found himself struggling with cool, wet soils in the spring on the untiled acreage. Coming from a long history of no-till, he first noticed the potential of strip-till while using an anhydrous bar.

“We didn’t have widespread success with the anhydrous toolbar right away, but we could see that it was a direction that could help us,” he says. “Around that time we were noticing that there was some fertility stratification in our soil tests. These discoveries inspired us to look at strip-tilling.”

Davenport grows corn and no-tilled soybeans on a nearly 50/50 split, with the addition of 200-300 acres of wheat every year. When he started strip-tilling, it was in a limited capacity on his corn ground with a used 16-row Progressive toolbar.

After about 3 seasons, Davenport saw the benefit with soils drying out earlier in the spring and better fertility placement, which prompted him to invest in the 16-row Case IH NTX 5310 toolbar with a Montag fertilizer cart that he still uses today.

Although he credits his success to a number of different changes in practices, he has seen the ground he uses to benchmark his yield improve markedly over the past 15 years.

He experimented in field of pure timber soil that’s on rolling ground and has woods on two sides to benchmark corn yield.

“We’ve recently seen well over 200-bushel corn and 60-bushel soybeans on it where we used to get 170 bushels of corn there,” says Davenport. “We see less erosion, higher yield with less nitrogen, increased infiltration and reduced compaction. When we used to sink a soil probe or go tiling, the soil was getting to the point where it was almost hard and now it’s much softer.”

Primarily a fall strip-tiller, Davenport applied anhydrous ammonia with his bar at first. It only took him a year to decide that this approach wasn’t efficient enough for him, and he opted to apply only dry fertilizer in the fall. However, it’s through his attention to individual fields that he decides how much to apply.

Davenport sidedresses the balance of his N, often starting about V4 stage. The multiple applications, combined with cover crops have allowed him to start decreasing N applications on some fields. 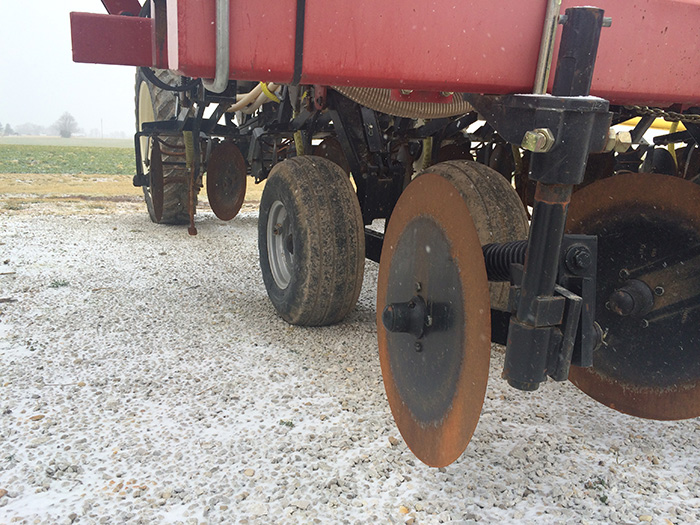 Minor Modifications: Without row cleaners, Davenport’s Case IH strip-till rig is basically set-up with a straight coulter, mini mole knife, closing disks and a curved rolling basket. Although it performs well in the fall, his recent spring tests are prompting him to make a few more adjustments.

Davenport started experimenting with cover crops about 8 years ago, and he’s spent the intervening years trying to determine the best method for planting his mix of cereal rye, oats and radishes. Having seed flown on proved to be a bit too expensive and inconsistent for Davenport, so he engineered an air seeder delivery system.

“We ended up putting a Valmar air seeder on a Salford vertical tillage tool and setting it to just very lightly tickle the soil as it spreads,” he says. “We immediately had excellent results, but the problem was that we were running right over our strips while seeding because we were still making them right after harvest. The strips were still there, but we just felt like we were working against ourselves a bit.”

To counteract this, Davenport switched the steps and now vertical tills and seeds cover crops first after harvest and builds strips right into the seeded ground after that.

“We follow up with the strip-tiller right away,” he says. “We still seem to get great seed to soil contact and the strips stay in place.”

He feels that getting strip-tillage and cover crops to work alongside in his system has enabled him to dial N rates back to as low as 0.7 pounds per bushel in some fields and has increased the speed at which his soil warms up and dries in the spring. He’s also seen his organic matter, which hovers around 1.2%-3.5%, start to steadily climb on all the ground that have continuous cover crops. 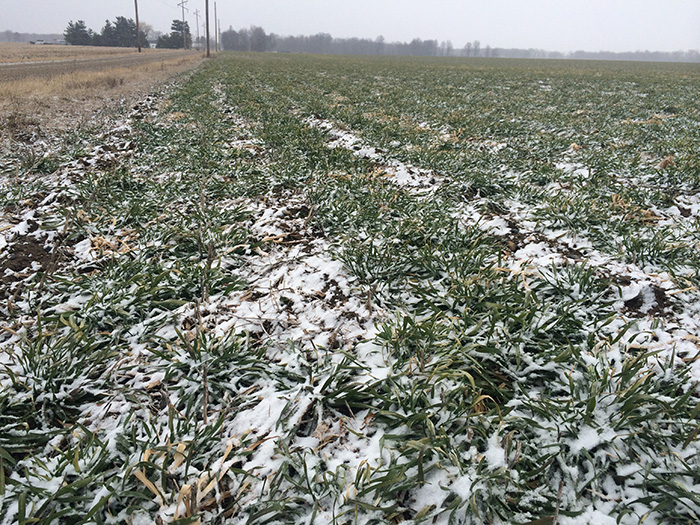 Covering Up: Davenport started experimenting with cover crops about 8 years ago, and he’s spent the intervening years trying to determine the best method for planting his mix of cereal rye, oats and radishes. He recently switched to vertical tilling and seeding cover crops after harvest and building strips right into the seeded ground after that.

Since Davenport is on a diligent no-tilled soybeans and strip-tilled corn rotation, he’s felt comfortable running his rig without row cleaners — saying that they seemed to be causing a bit of undue erosion.

“It seems like the row cleaner can have a bit of a negative effect on areas where my ground is rolling,” says Davenport. “If I can turn a little bit of that soybean stubble back into the strip with the soil, it doesn’t really hurt me because most of its gone by spring anyway. Without row cleaners, my strip-tiller doesn’t make quite as wide or black strips and maybe I’m missing out on a little extra warming, but I’ve experimented with them and I’ve seen that it’s better without them for me.”

Without row cleaners, Davenport’s Case IH rig is basically set-up with a straight coulter, mini mole knife, closing disks and a curved rolling basket. Although it performs well in the fall, his recent spring tests are prompting him to make a few more adjustments.

“We’ve always been more heavy on the fall side of strip-tilling, but over the past 2 or 3 years I have been moving more acres to spring,” says Davenport. “It’s a little bit of a risk because we’re running that shank-type system through the ground in the spring when it’s still wet, but it hasn’t bit me yet. Adjusting it to run more shallow seems to help with that as well.”