SEEDBED PREP. Strip-tilling in the spring prepares a seedbed as well as incorporates a pre-plant nitrogen application for Bill Weems who farms near Aberdeen, Texas. His 12-row Kuhn-Krause Gladiator strip-till machine carries 1,000 gallons of liquid fertilizer and a John Deere rate controller.

It’s said “necessity is the mother of invention” and that “adversity can be a blessing in disguise.”

The extreme drought across the Southern Plains in 2011 and 2012 provided a lot of “necessity and adversity” and Bill Weems says he’s one of a number of farmers in the middle of the Texas Panhandle who are better off for the experience. Before the drought, Weems was a conventional farmer growing about 2,500 acres of wheat and milo about 10 miles east of Amarillo, Texas.

“Our management consisted of plowing, pulling an anhydrous ammonia tank, planting and running the combine. It was simple. We didn’t even soil sample back then,” Weems explains. “But after the drought set in, most of us in this area realized that kind of farming wasn’t working.”

Weems knew he needed to make some big changes in his operation as he watched out of the back of his tractor during tillage operations and “saw the soil moisture blowing away in the wind.”

“A lot of us started examining what we’d been doing in 2011 and 2012,” he says. “Our ground was as hard as a rock, there were no earthworms and we couldn’t take advantage of the 18-20 inches of rainfall our area gets because it wouldn’t infiltrate into the soil.”

His solution started with a move to strip-till, because it allowed him to disturb only the ground he was going to be planting and allowed for fertilizer placement where the plant really needed it. He hired a neighbor to strip-till his fields the first year.

“We did 500 acres so I could plant grain sorghum,” Weems recalls of that droughty summer of 2012. “Because it was so dry, it wasn’t the best crop, but it did so much better than conventional fields, I was convinced to make the switch to all of my acres.”

Since then, Weems has become a strong advocate of strip-till management, a regular user of locally-available composted feedlot manure and co-owner of Texas Panhandle Organics, a retail operation specializing in soil amendments and cover-crop seed. He’s also a new believer in regular soil sampling and extensive use of cover crops on his own operation.

About 3 years ago, he bought a 12-row Kuhn-Krause Gladiator strip-tiller equipped with a 1,000-gallon fertilizer tank and a knife-and-tube fertilizer system controlled by a John Deere rate controller.

“With that rate controller, we can vary the fertilizer application down to a tenth of a gallon per acre if necessary,” he explains. “I bought the Gladiator with the tank because I wanted to put the pre-plant fertilizer down as I built the strips in the spring, but I didn’t want to be pulling something behind compacting the strips and the top soil.” 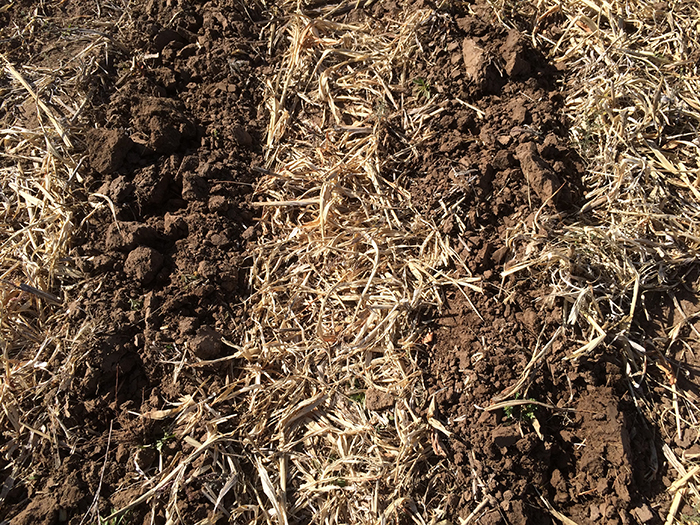 SPRING AHEAD. Spring-built strips in residue provide a ready-made seedbed for Weems’ planter. The Texas strip-tiller says planting in the strips is a breeze with RTK guidance, giving him excellent stand emergence and plant placement.

This year Weems’ custom harvesters will be data-logging his crops to help build field maps to take advantage of the variable-rate fertilizer application in the future.

“We’re not there yet, but we will be,” he explains, noting he’s eager to move beyond sampling an entire field and co-mingling the cores to arrive at an “average” fertility prescription. “We’re headed to field-map control of our nitrogen (N) fertilizer application.”

Currently, he applies his pre-plant N through the strip-till rig as he builds his strips, knifing 32-0-0 liquid N into the strips, 8-9 inches deep. On irrigated land, additional N can be run through the center pivot sprinklers as the season progresses to better supply fertility as the crop develops.

All of Weems’ N is applied according to soil sample analysis based on crop yield goals and all of it comes in the form of liquid, he explains, adding, that they no longer use anhydrous ammonia.

To meet any phosphorus (P) or potassium (K) deficiencies, Weems uses broadcast composted feedlot manure as needed, usually every 2-4 years, along with a shallow 3-4 inch cultivation to incorporate the material. Studies show $24 per ton compost contains the N, P and K equivalent of $70-$80 per ton commercial fertilizer, Weems says.

“Compost only has about 28 pounds of N per ton, but it’s very rich in P and K, so we rely on it solely for those elements,” he says. “We have to incorporate it with shallow tillage and that costs some moisture, but for the price of the inputs, I think it more than makes up for it.”

At the ground level, Weems runs a stock Kuhn-Krause row unit setup with two discs behind the coulter and one set directly behind the shank to fluff the strips. Behind that he’s running a set of chain rollers to break up any clods. He confines his strip-tilling to pre-plant operations in the spring.

At planting, Weems uses the GPS maps he created as he built his strips and, with RTK he plants directly on top of the strip centers — placing the seed just above the pre-plant application. “We’ve found that provides us with an excellent seed bed,” he explains. 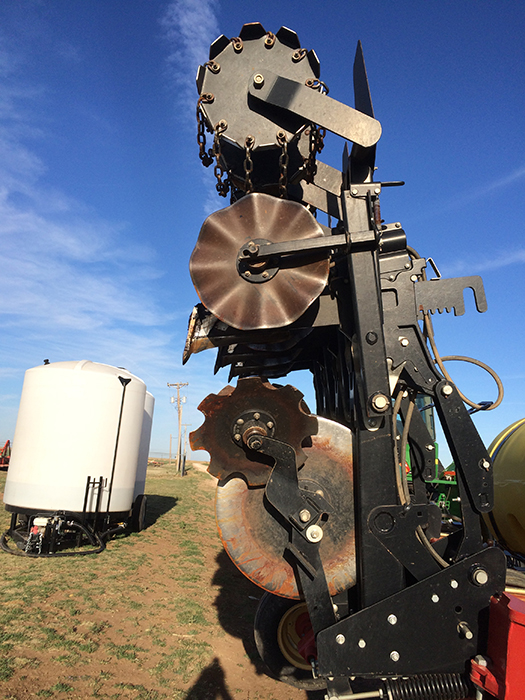 SET UP FOR SUCCESS. The row units on Weems’ 12-row Kuhn-Krause Gladiator strip-till unit includes a coulter up front, double discs ahead of, and behind, the shanks and a chain roller to break up clods.

Strip-tilling made obvious differences in soil moisture conservation and reduced fuel costs, but cover crops also have come to play as a key to successfully farming in the semi-arid Texas Panhandle. Weems says soil samples tell it all.

“We took on a new farm last year and the soil samples indicated we needed 60-100 pounds of P and K along with 200 pounds of N to grow a hay crop because the soil was depleted,” he says.

Weems broadcast 4 tons of composted feedlot manure, plus inoculants on the irrigated field and planted sorghum-sudan on it. They harvested 10 big round bales (about 1,350 lbs. each) per acre off the field and then sprayed the regrowth and soil sampled.

“The results from Servi-Tech Laboratories showed, for 200-bushel corn, I needed 255 pounds of N, 10 units of P and 15 units of sulfur,” he says. “We no-tilled a mixture of triticale, tillage radishes and crimson clover in September of 2015 and put 200 pounds of beef per acre on the emerging cover crop on November 22.

They had plenty of moisture, and didn’t have to water the field all winter. When they took the cattle off March 15, they realized a 3.1-pound-per-day rate of gain by grazing the cover crop. They also pulled another soil sample and asked for recommendations for 200-bushel corn.

“Those results showed we needed 220 pounds of N and only 2 units of zinc for our expressed yield goal,” Weems explains. “So, that no-till cover crop, with the legumes included, added 35 pounds of N to our field, gave us some significant gains on our cattle, and protected the soil all winter from wind and moisture evaporation, and the tillage radishes are still growing this spring — penetrating a very hard plow pan.”

That new farm is destined to move into the operation’s strip-till row-crop rotation this year as Weems adds cotton to his cropping scheme. “We’ve never grown cotton before, but the economics make it attractive here in the central Panhandle,” he adds.

Weems has come a long way in 4 years — from conventional farming and seat-of-the pants anhydrous ammonia fertility applications. He’s moved to strip-till on all of his 2,500 acres, but still applies a shallow cultivation every 3 to 4 years when he incorporates a compost application. But, from the tractor cab, what he sees as he farms today convinces him he’s on the right track.

“I notice in fields we’ve grazed and are returning to crop production the water from rains and from our irrigation sprinklers doesn’t stand on the surface as it once did,” he says. “That’s important in our very dry, windy conditions. We need to conserve any precipitation we get and any irrigation water we pump. The costs to waste those resources are just too great in today’s economy.”

He says, so far, it’s difficult to point to yield differences from his move to strip-till.

“With the drought, we had severely reduced yields, and then the past couple of seasons we’ve had rainfall far above average and an outbreak of aphids that hurt our grain sorghum, so it’s difficult to compare,” he says. “I just know that once we got the conventional fields converted to strip-till, we now burn a lot less fuel and the soil is in much better condition than it’s ever been since I began farming.”

Weems is also proud of what’s going on beneath the surface of his strip-till fields, particularly the newly-rebounding earthworm population. He credits not disturbing the soil between the 10-inch strip rows with the return of the earthworms.

“I remember digging in Grandma’s garden for earthworms — she composted everything in the garden — and finding 15-20 worms per shovel full of dirt,” he says. “We’re not quite up with Grandma’s garden on earthworm numbers, but we’re close.”