By Dan Crummett posted on July 26, 2016 | Posted in Nutrient Management

These spring-built strips are in a newly-acquired farm being managed by Dutch Road Dairy. The killed-alfalfa provides excellent ground cover between the rows for a forage- or grain-sorghum crop that traditionally begins the operation’s rotation. Photo Courtesy of Dutch Road Dairy

When Matt and Nancy Beckerink moved their upstate New York dairy operation to Muleshoe, Texas, in 2009, Matt says it was apparent he was going to have to change his forage production methods from conventional tillage if he was to feed his 2,200-head milking herd at Dutch Road Dairy.

"The wind here in the spring is so intense and if there’s no residue on the fields the soil blows away,” he says. “We knew we had to keep significant amounts of residue on the soil to prevent erosion, so that meant we couldn’t plow.”

Being located very close to the Texas/New Mexico state line on the west side of the Texas Panhandle the area typically only gets about 18 inches of precipitation per year — about half the amount needed to grow the Beckerink’s corn, soybeans, forage sorghum and sugar-beets. The difference has to be made up through irrigation and he says strip-till just seemed to be the answer.

For the first 2 years, Beckerink had a lot of help from a neighbor who was a successful strip-tiller. “He planted our crops for us the first 2 years and we watched what he was doing on his own place,” he says. “Essentially, we stole his management methods, and they work.”

By 2011, Dutch Road Dairy had its own strip-till machine, a 12-row Orthman 1tRIPr set on 30-inch spacing, and a brand new farm manager — Micah Troyer, who hit the ground running putting strip-till to work.

“Strip-till works very well for us,” Troyer says. “It allows us to make a good seed bed and apply our fertility in one trip. To do the same with conventional tillage, we’d be making two or three more passes and burning about three or more gallons of diesel per acre than we do.

“Strip-till also helps us save a tremendous amount of soil moisture by reducing evaporation losses we’d have if we were plowing and blowing with conventional tillage,” adds Troyer “When we strip till in January or February we’re not doing anything drastic to lose the moisture we’ve gathered through the fall and winter with rain and snow. Usually, we’ll have a nearly full soil profile down to 48 inches in the spring.

The residue between rows and alternate-year deep ripping between the rows also has helped the operation increase water infiltration and storage, reducing evaporation and the amount of pumped water needed in spring.

“We’re committed to strip-till, but each year we run a ripper between the strips to control any compaction we may have from harvest traffic. The following year, we build strips over those ripped rows, and then run the ripper over the last season’s strips,” Troyer explains. “We do disturb the soil between strips, but it’s only the width of a ripper shank.”

“In one pass, this machine will make a seedbed comparable to having been over the field three times in conventional farming,” Troyer says. “We have to take the time to make sure it’s adjusted for individual field conditions, but the results speak for themselves with the seedbed it produces.”

They build their strips in the spring after running a light application of irrigation water to settle the soil.

“The grain sorghum we sell and turn it into corn, and the wheat we sell and keep the straw. Everything else stays on the farm for the cows,” Troyer explains. “We have only one strip-till unit running behind a John Deere 9220, so you know we run it hard.”

“We take the wheat off as silage in April or May and strip-till and plant either grain sorghum or forage sorghum, which we’ll harvest in the fall,” he says. “After harvest, we’ll deep-rip down to about 20 inches between the 30-inch rows and then return after the first of the year and strip-till on top of those deep rips. Then in the spring we’ll plant corn. Following corn harvest, those acres go back to triticale for silage or wheat for grain.”

Troyer says by alternating the deep ripping back and forth 15 inches each year helps control truck-traffic-induced compaction, which occurs during silage harvest. 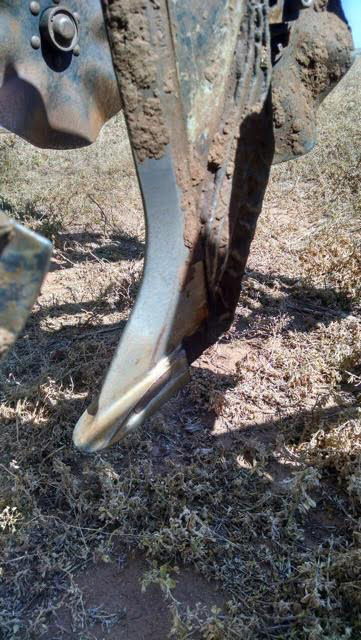 With 3,000 acres to cover each year, shanks on Dutch Road Dairy’s Orthman 1tRIPr 12 row strip-tiller get a lot of wear and tear. Troyer says the shanks go in for re-hard-facing twice a year. Photo Courtesy of Dutch Road Dairy

Beckerink says one of the things that impressed him most about strip-till when he began considering it for the dairy, was the ability to precisely place fertilizer in the root zone of the crop at the time the strips are being built.

Annual soil samples across the farm guide fertilizer application (both liquid and dry manure) and that usually includes 20-40 gallons per acre of 28-0-0-5 (Sulphur) applied when the strips are built.

“Our actual fertilizer analysis selection depends upon the field and soil tests. We pull a 1,300-gallon tank and apply the nutrients about 9-10 inches deep through knives on the shanks of the strip-till rig,” Troyer explains.  “On new farms that haven’t had manure applications, we’ll spray 32-0-0 nitrogen with humic acid before planting corn or sorghum. Otherwise, everything else we’ll apply through the pivot.”

Troyer says while he does use fertigation, he’d rather use a ground rig or the strip-till machine for the majority of his crop’s fertility needs just to be certain the application is made correctly.

“I just think fertilizer through a center pivot is inconsistent,” he says. “And, when we have 30 circles to watch, there’s always the chance of nozzles plugging up or pivots shutting down. It’s difficult to keep an eye on everything.”

“When I started, we were getting 18-20 tons per acre silage,” he says “Now, after we’ve organized the rotations, we’re getting 25 tons per acre. I can’t say all of that has been from strip-till, but it’s certainly been a big factor.

“I know in the tighter soils, we’ve seen soybean and sugarbeet yields increase. And, last year we no-tilled some sugar-beets for the cows and noticed we did 5 tons per acre less than the year before when we strip-tilled them.”

Troyer also says organic matter content of the farm’s fields is rising along with earthworm numbers and other evidence of improved soil biology.

“Five years ago our fields were measuring .08% to 0.9% organic matter content. Now, those fields range from 1.0 to 1.5%,” he says. “Also, our precise manure applications — all made according to soil sample and manure analyses — are a big part of the improvements we see in soil health. We’re convinced it’s feeding the life in the soil.

“When we take on new land that has been treated with anhydrous ammonia, we see in about a year or so under our fertility management, a tremendous increase in earthworm counts. Just leaving the soil undisturbed between strips is making a big difference.”