San Joaquin Valley dairy ditches the dikes to water and plant on flat fields, using strip-till to cut labor and fuel costs in half and achieve better timing on planting and pest control.

SMOOTH RIDE. The combination of farming on the flat instead of on irrigated beds and strip-till have allowed J&R Dairy of Merced, Calif., to get their corn crop planted a month earlier than with conventional farming. Here, the planter rides on spring-built strips that appear flat because they’ve been through an early-season surface irrigation.

For years, the J&R Dairy outside Merced, Calif., has gone about surface irrigation in the traditional way of bedding cropland and watering down the sides. It works, but it’s labor intensive and leaves a corn crop in jeopardy early in the season when mites are hungry and the field is too wet to run a ground rig.

All that’s changing for Mark Barroso and his parents, Joe and Renee, who milk about 700 cows and farm 1,000 acres to keep the feed bunks full. The Barrosos are moving into strip-till management as they continue to produce about 450 acres of green-chop corn and 550 acres of alfalfa per year. After corn, they over-winter their fields with an oats and barley cover crop that provides an early-spring forage source.

“We’ve been watching strip-till operations in our area for a number of years,” Barroso explains. “Our friends who use it, have been telling us we needed to try it because it would allow us to stop bedding the fields and that would save a lot of labor, diesel fuel, time in the field, plus the frustration of waiting on the ground to dry to get back in the field for the many operations we had to do.”

In 2015, the family worked with California Ag Solutions to become strip-tillers for the first time, a commitment that meant a sizeable project of re-leveling their fields for an even flow of irrigation water across the field from a series of valves spaced 60 feet apart at the head of their cropland.

“Our land had been leveled back in the day,” Barroso explains. “But to get the grade we needed we had to do an extensive planing job that removed up to 2 feet of soil in some areas. We know that left us with subsoil to plant in, but we’ll just live with that and build it back up over time.

“Once we did that, however, we could plant all of our fields flat, and started seeing the benefits of strip-till immediately.”

One of the first things that became apparent with the transition to strip-till was the ability to make timely miticide applications when the corn was 24-30 inches tall.

“Conventionally, we’d have knee-high corn and it would need water, but we’d be hesitant to muddy the field because we had to get in with the ground rig to fight mites that are damaging at that time of the season,” Barroso says. “We’d let the plants suffer until we could spray, and if you let corn suffer, you’ve lost yield.

“Using strip-till, and planting and watering flat, we can time our irrigation about 9-10 days before the miticide is needed, go run the sprayer, and then turn the water on again. 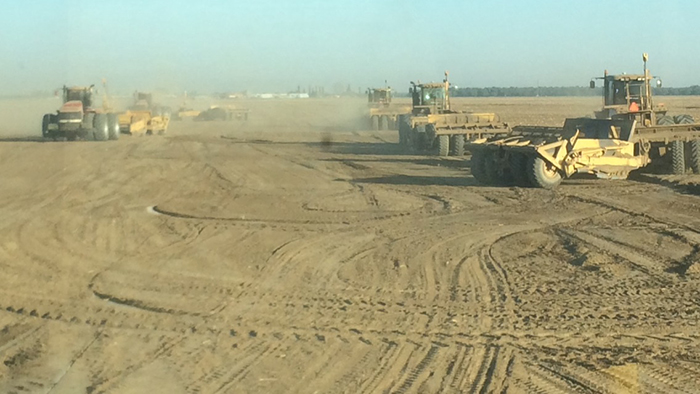 LEVELING OUT. Preparation for flat surface irrigation and the subsequent use of strip-till to save time, labor and fuel, involved a significant earth-moving project for the Barrosos. In some areas more than 24 inches of soil had to be removed to provide the flat gentle slope necessary for surface irrigation.

Barroso says this process has eliminated all the work of moving and setting pipe and manipulating the ditches.

“We just turn the water on now and apply the 3-4 inches we need,” he says. “Strip-till made it possible to grow corn more efficiently on a field that is now much easier to water.”

In 2015, the Barrosos used CAS’s 8-row Kuhn Krause strip-till machine matched to their 30 inch rows. In 2016, they ran a CAS-supplied Orthman 8-row 1tRIPr with conventional standard row units to build their strips in the spring.

“We purchased a John Deere 9460R tractor with three-point hookup to pull the Orthman strip-tiller,” Barroso explains. “With that tractor, we ran the shanks at about 13 inches deep, and pulled it at 6-7 miles per hour.

“That really blows the ground apart, and running that deep we get excellent water penetration throughout the season. Our strips usually run about 12 inches wide.”

The strips are recorded in the family’s Deere GreenStar system and subsequent field operations are guided off those maps with an RTK signal.

“The GPS allows us to never drive on planted zones and helps us with compaction,” Barroso says. “So far, we’ve planted on the same rows both years, but in the future we’ll consider shifting the strips 15 inches to the middles every other year.”

Barroso says the dairy’s farming operation starts once the small grain forages are taken off in late winter when they build the strips and do a pre-plant irrigation application.          After the fields dry, they plant Roundup Ready 120-day DeKalb varieties with their 8 row Deere vacuum planter.

Fertilizer management is according to soil test analyses, and includes an in-furrow application of potassium and a 2-by-2-inch application of nitrogen (N) — about 125 units of per acre — and zinc. After that, they make a trip with a ground rig to fight mites — for a total of four field passes.

“Right now, we’re doing all of our fertility in a single shot,” Barroso says. “In the future, however, we’re planning to get a rolling disk sidedresser to use after the first irrigation to more evenly spoon-feed the crop before the second watering.” 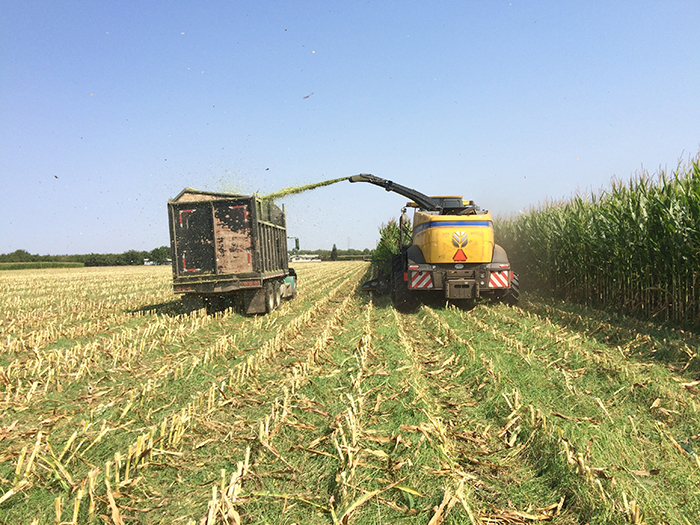 WINNING COMBINATION. Harvest is simpler and more rewarding for J&R Dairy today because fields are flat and GPS-mapped strips allow precise fertilizer placement for increased yields. The Barrosos say the combination of strip-till and flat farming allows them to plant corn a month earlier, and the extra timing flexibility gained allows them to do a better job of pest control in their fight with mites.

Once the corn is 6-10 inches tall, it’s over-sprayed with glyphosate to control grasses and they water again, Barroso explains. Then, they apply Comite to combat mites when the crop is up a couple of feet, and we don’t go back in the field again until harvest,” he adds.

“In the past, we would disk 2 or 3 times, then land-plane 2 or more times, we’d list for the furrow and then pre-irrigate it. Then, we’d plant and do a Roundup application before emergence, and come back again with the miticide after the corn was up,” Barroso explains. “Plus, some years we’d do 1 or 2 cultivation passes to keep the rows open.

“That’s easily a minimum of 10 trips over the field — depending on how much land planing we decided to do — compared with the 4 trips we make now. The diesel fuel saved and the reduced wear and tear on equipment and our limited labor force is tremendous with strip-till.”

The change from conventional farming to strip-tilling has easily saved the Barroso’s half their fuel bill to produce a crop, plus Mark says the corn yields have been significantly better farming in strips.

“We don’t weigh our yields, because everything is fed in-house, but I know we’re producing more feed because we can get a handle on the mites in a timely manner,” he says.

Barroso adds that the less frantic pass made possible by strip-tilling gives his family some added flexibility in getting the crop in the ground on time.

“The temperatures here in our part of the San Joaquin Valley are crazy from April through June, and with our reduced labor requirements with strip-till and flat planting we can really start early by taking the forage crop off and then planting in strips — it gives us a month-early head-start on corn,” he says. “The weather is good that time of year and the days are a little shorter, so the corn gets up healthy easier without having to water at such a frantic pace.”

Barroso says J&R Dairy is in the market for a strip-till machine of its own, and knowing power requirements are dropping on the farm because of strip-till, the business has already realigned its tractor stable with lower horsepower, more-efficient machines.

“We’ve just seen so many benefits to this change to flat-planting and strip tilling,” he notes. “Not the least of which is, we don’t have to work so hard to produce the same or more feed for our cows.”

What A Difference A Year Makes For Strip-Tillers